Today, I'm delighted to share my review for The Knight's Tempting Ally, an adventurous historical romance with a feisty, memorable heroine, by Ella Matthews.

My thanks goes to Rachel's Random Resources and the author for a copy.

This is the second historical romance I've read by Ella Matthews and, again, I found it engaging and intriguing.

The ’knight’ is Theo, a king's man, estranged from his family and completely committed to his duty. When one of his tasks involves discovering more about a target, he gets to know Medea, the middle daughter. But he doesn't expect to fall for the unusual girl.

Medea is not like her sisters. She's outspoken, direct, and not at all as one expects from a lady. Undeterred, she voices her opinions, whether they are invited or not. In her own mind, she's also lacking beauty, so expects a fate in a nunnery. So she doesn't expect any more from Theo than mere friendship.

Meanwhile Theo is torn between his duty to protect the king and his growing feelings for Medea. His is a real dilemma, which places him at odds with his task.

Will they find a happy future together, or will his duty drive them apart?

I liked Medea a lot. She is a clever character, and her outspoken nature creates many challenges for her and Theo. Her lack of self-esteem is endearing, and it is only through Theo that she learns that she is deserving of love and affection.

Theo is a man with his own demons to slay. A complex character whose life has not been easy. And it's just made more complicated by Medea...

The research is impeccable, as expected, and the setting provides the perfect backdrop.

The Knight's Tempting Ally is a wonderful romantic adventure with complex characters. Ms Matthews has not made it easy for them, and their path is realistic and fraught with challenges. The perfect read! 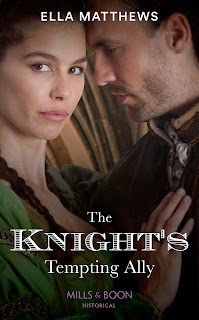 Knight Theo Glenville will do whatever it takes to discover who’s plotting against his King. So befriending—and even romancing—his target’s middle daughter, Medea, is merely part of his sworn duty.

Falling under the spell of a woman who’s anything but plain in his eyes! Yet every day they become closer, the more torn he is between his allegiance to king or his heart…

When not thinking about handsome heroes she can be found walking along the coast with her husband and their two children (probably still thinking about heroes but at least pretending to be interested in everyone else). 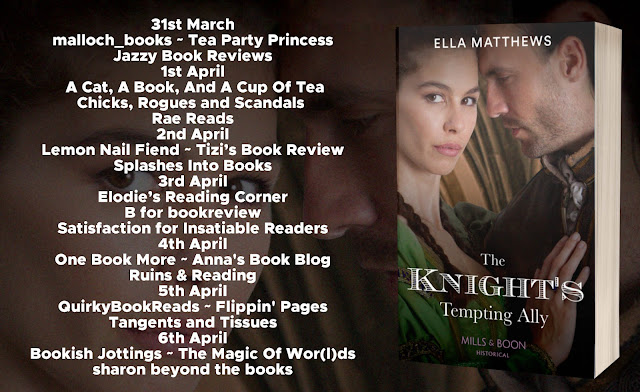