Today, I'm posting the first in a line of reviews of historical novels I've enjoyed reading.

For several years, I hosted a now defunct historical romance review blog, until I found that 24 hours weren't enough in a day. Now, as I have time to read again, I've discovered many wonderful books from brilliant historical fiction and romance authors, so I'm adding reviews  to this blog to share those stories with readers.

So, the first one up is a beautiful story called Overture by Vanessa Couchman. Overture is the first in the L'Alouette Trilogy about a young girl from rural Aveyron in the south-west of France. A backwater, many would say, but such a beautiful one!

Disclaimer: I must tell you that I have read the novel prior to its publication. However, it's such a moving tale, of hardship, of loss, and of dreams come true, that you will have to see for yourself whether it's a book you'd like to read.

We begin in Aveyron in 1897. Marie-Thérèse is a young girl born into a farming family living on a rented farm near a small village. Gifted with a beautiful singing voice, she dreams of becoming a professional singer – at a time when that profession was by far not as accepted and respectable as it is now (well, one could argue the latter point sometimes, but hey...). Highly intelligent, she also knows her place as a dutiful daughter of God-fearing parents, though her dreams continue.

When tragedy strikes, her life is thrown into turmoil. Evicted by their landlord – a particularly uncivilised but powerful man whose advances she rebuffs, with dire consequences – Marie-Thérèse and her mother Augustine find themselves homeless. When a good friend takes them in, they are barely able to make ends meet, and relying on charity is not something either of them can accept easily.

So, with a final sad glance at the only world she has known, Marie-Thérèse and Augustine board a train to stay with her aunt and uncle who run a restaurant specialising in Aveyron cuisine in Paris. Dazzled by the lure of the big city, Marie-Thérèse begins to dream again of a singing career, but the path to fame and fortune is littered with obstacles...

Overture is a beautifully-written tale of a young girl following her dreams. We feel for her when she fails to convince the professionals and when her mother puts her foot down, trying to keep her on a more respectable path. And we rejoice with her when she receives praise for her beautiful voice, and the hard work she puts in.

The characters are all very well-developed. Marie-Thérèse comes to life with her emotions and actions; her aunt and uncle are real 'characters', flawed and caring beneath a blustery exterior; Frédéric, her mentor in Paris, is intriguing.

Ms Couchman conveys a deep sense of setting in Overture. Through Marie-Thérèse's eyes, we 'see' Aveyron and its rolling hills of fields and forests, and we feel the vibrant city that Paris was at the turn of the last century. Having recently visited Aveyron, I can only attest to it being exactly as described. Not much has changed there in the last 100 years.

Readers who like historical fiction with a young heroine following her dreams, through hardships and challenges, will love Overture, as will readers of novels set in France.

As Overture is the first in a trilogy, I'm very much looking forward to the next instalment in Marie-Thérèse's personal and musical journey... 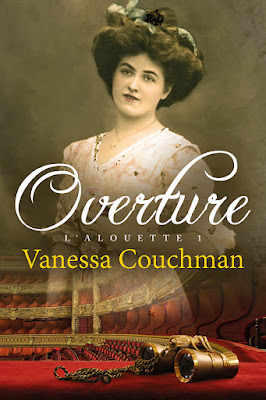 What if you had a unique talent, but everything conspired against your dreams?
France, 1897. Born to a modest farming family, Marie-Thérèse has a remarkable singing voice and wants to become a professional singer. But too many obstacles, including her parents' opposition, stand in her way. And, through no fault of her own, she makes a dangerous enemy of the local landlord.
When the family circumstances change suddenly, Marie-Thérèse and her mother must move to Paris to work in her aunt's restaurant. Her ambitions rekindle, but the road to success is paved with setbacks until a chance meeting gives her a precious opportunity.
She is close to achieving all her dreams, but the ghosts of the past come back to haunt her and threaten Marie-Thérèse's life as well as her career.
Overture is the first in a trilogy set in France, starting in 1897 and finishing at the end of World War II.

Overture is available in ebook and paperback formats on various Amazon outlets, including Amazon UK, Amazon US and Amazon France.

Thank you for reading this review. I hope you found it useful.

Posted by Cathie Dunn at 8:35 AM No comments:

Visiting Najac, a fortress in Aveyron

Last weekend, I had the pleasure to visit author friend Vanessa Couchman at her home in the Tarn et Garonne area, a mere 2 1/2 hour drive from us. She had an author talk organised by a local library on the Friday, so apart from seeing her, I took the chance to explore the area a little. It's well worth it, and I'm hoping to go back again one year.
Pretty historic villages dot the hillsides covered in forests and fields. It is an agricultural area – as different as could be from our own dry wine-growing region. You fall in love from one place to the next. I'll be writing about these beautiful places next time.

Today, the focus is on a medieval fortress: the castle at Najac. Not a fancy 'chateau' as the young French guide told us, but a 'forteresse'. Situated on top of a hill, you have sweeping views over the countryside. An old lane leads directly down the steep slope and up again into the village of the same name located on an opposite hill.


Najac had a varied history, often changing hands. When a square keep was originally built in 1100, the counts of Toulouse held power over the lands, which retained their independence from the kingdom of France, which was confined to the north. But as the dreams of expansion southwards grew, French kings began to take, rebuild and garrison castles in strategic places like Najac. 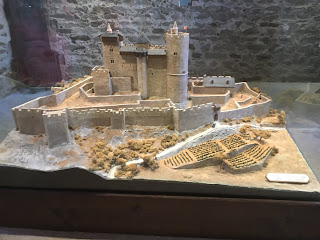 There was a square tower keep on the site prior to the current castle, however, it was incorporated into the 'new' fortress in 1253. Built by the locals on order of Alphonse de Poitiers, brother of the saintly King Louis IX, it oozed Royal power. 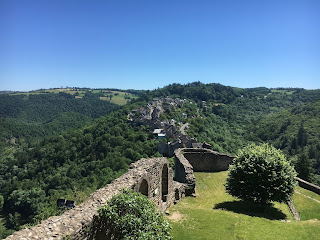 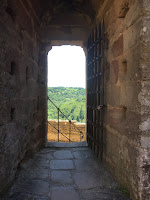 The site played a role during the Albigensian Crusade against the Cathars; and the Templars, charged with heresy, were also held here. Both 'crusades' were part of the conquest of the south by French kings. Soon, the region's cherished independence had been subdued.

The castle changed hands during the Hundred Years' War, when the English occupied it for many years. Later, the Wars of Religion brought the (Protestant) garrison into trouble with the predominantly Catholic villagers, who besieged the castle.

Again and again, Najac was used as a defensive place, but it could also turn into a trap. Starvation and illness often became rife, and those within would be forced to surrender – usually to a horrible fate. 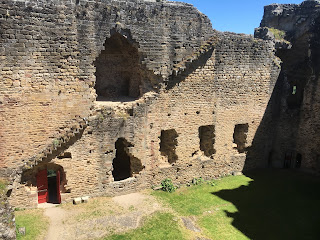 Nowadays, Najac is a pretty (and) impressive ruin that's well worth a visit. The young French lady who gave us an hour-long tour told us much about the history, and showed us beautiful carvings, incredible views and the most amazing defensive archery slits of 6.80 metres in height! Three archers could loosen their arrows comfortable through those gaps. Just imagine... 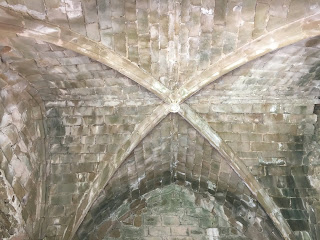 Of course, I had to buy two history books in their small shop on the way out. You can never have enough history books... ;-) 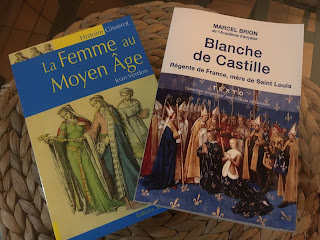 Posted by Cathie Dunn at 4:28 AM No comments: