Review: Alba is Mine by Jen Black

Today, I'm sharing my review for Alba is Mine by author Jen Black. Set in 11th century Scotland, it's right up my street with its sense of adventure, politics and a touch of romance.

An absolutely gripping read, Alba Is Mine is the kind of story that stays with you well beyond the last page. It's well-plotted, with realistic characters, and the author describes the setting very well.

It is the year 1034, and King Malcolm II sends Finlay of Moray north on a mission to Finlay's half-brother, Thorfinn of Orkney – a thorn in Malcolm’s side. Finlay, who recently discovered his childhood love, Kilda, married off to another, is stalling when Thorfinn suggests marriage to his own headstrong sister, Ratagan, as part of the negotiations with Malcolm.

When news of Malcolm's death, and ambitious Duncan's accession to the throne, reach them, Finlay sides with Thorfinn to fight against the one man that stands between him and the throne of Alba he rightly claims. But with Kilda's scheming, and Ratagan's temper, can he focus on the task ahead?

I enjoyed reading this adventure of a dark period in Scotland’s history. Assassinations amongst heirs to the throne were commonplace, and loyalties could shift overnight. Ms Black described the politics of the day well within the context of the plot, and without turning the novel into a history timeline. Add a few likeable characters for readers to rally for and the gorgeous setting that is Scotland, and you have a gripping combination.

Its absorbing mix of romance, adventure and politics makes Alba Is Mine a must-read for fans of medieval Scottish romantic fiction with a strong dash of action and intrigue. 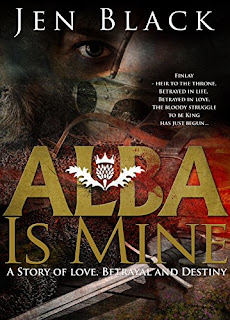 In 1034, the fuse has been lit that will change the kingship of Alba. When his place in the succession is rejected, Finlay of Moray rebels against his uncle the king and sides with half-brother Thorfinn of Orkney.

With his intended bride married off to his cousin, his boyhood friend joining the opposing side and the threat of war looming, there is little happiness for Finlay. Wanting to cement the bond between them, Thorfinn badgers him to marry his beautiful sister, but Finlay, reluctant to abandon hope of his first love, grimly resists the idea.

This absorbing, fast moving tale of power, greed, family rivalries and one man's vision of the future for his troubled kingdom will keep you turning the pages into the wee small hours.

Alba is Mine is available in ebook and paperback formats on various Amazon outlets, including Amazon UK and on Amazon.com.

Visiting Montolieu, the village of books

Today, we went on a leisurely drive into the Cabardès area, a hilly forest area at the southern feet of the Montagne Noire. Or, in simple terms, just twenty minutes’ drive north from Carcassonne!
We were on our way to Montolieu, little realising that we'd taken the (very!) scenic route there. We found a quicker, but less pretty way back later, so it was well worth it. You're heading into higher ground, along tree-lined roads which offer welcome shade on a day that reached 36C in the area. 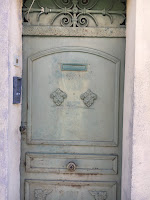 Montolieu is known as the ’village du livre’ – the village of books. A large museum there (which we didn't visit) was set up in the early 1990s to showcase bookmaking and a love for books. Over the years that followed, people established a range of mostly second-hand bookshops. No more than twenty across the village, but just enough for a good browse. Which we did, of course... 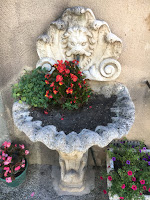 The area, then called Valseguier, was inhabited in pre-historic times, and an abbey was founded there around AD800. The Romans grew vines and olives and sheep were kept for production of wool. During the first three hundred years, minerals were mined and exported. After the Romans, the Visigoths arrived, followed by the Saracens, who, in turn, were chased further south by the Franks. 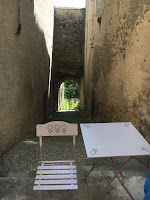 In the early 13th century, the Cathars – a sect based on an early Christian doctrine – were persecuted by the Catholic church throughout the Languedoc area. With the help of the abbey, Simon de Montfort, the leader of the so-called, Albigensian Crusade, put particular pressure on local Cathars and confiscated property of Cathars and of those lords who had dared to tolerate them. Not long after, the French King Louis VIII annexed much of the region and had the fortress at Montolieu destroyed. And then came the Inquisition...


To find out more about Montolieu's fascinating history through time, check this link (in French). 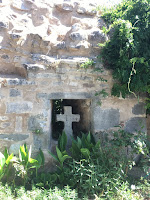 The location of Montolieu is stunning. Set on an incline, with several rivers and streams coming together below, you have a bit of a climb at times, but the houses on the narrow lanes provide plenty of shade either side. 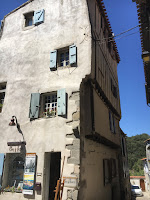 The bookshops are cosy, quaint, and filled with shelves upon shelves of books. Many have boxes outside with reduced titles ranging from Yoga and 1970s romance novels to Dan Brown! I bought two – one classic and one for research. Can't leave a book place without buying books, eh?!

There are a number of bars and restaurants, so visitors have a great choice, though many will likely be closed at times during winter, as is so often the case in the region. We found a shady spot for a chilled glass of rosé (with ample ice cubes provided), and enjoyed some people-watching time... 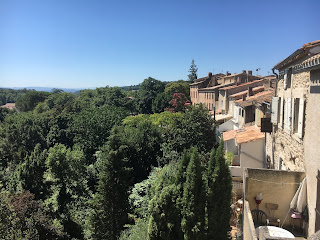 Montolieu is well worth a visit if you're near Carcassonne. Its quaint, relaxed atmosphere makes you instantly breathe out and take in the pretty little buildings and glorious views around the village.