Promo: Before Beltane by Nancy Jardine

I'm a big fan of Nancy's fabulous Celtic Fervour series, set in Northern Britannia during the Roman occupation. The novels are full of adventures, historical events, and touches of romance.

Before Beltane is a prequel, telling the stories of two main characters: Lorcan and Nara, the protagonists of The Beltane Choice. Both are fascinating characters!

Before Beltane has arrived on my Kindle, and I can't wait to read it. Keep an eye out for my review on here in due course.

Now, over to Nancy. Many congratulations on the release of Before Beltane! 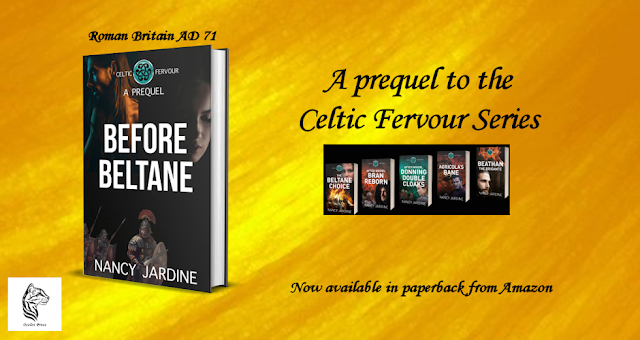 Thank you for inviting me today to share a little about Before Beltane, a Prequel to my highly acclaimed Celtic Fervour Series, which officially launched on the 29th April 2022 with Ocelot Press. It’s available in e-book and paperback formats from Amazon. It can also be ordered in paperback from bookstores, and is available for library ordering on request.

The idea of writing a Prequel to the series spawned from review comments for The Beltane Choice, Book 1 of the series. Some reviewers indicated that they loved the explosive interaction of Lorcan of Garrigill and Nara of Tarras, but would have liked a bit more about their individual backgrounds prior to their meeting each other in Book 1. Other reviewers noted that The Beltane Choice doesn’t quite have the same historical background details as the other four novels in the series, and that they’d have liked to learn a bit more about the background history of northern Britain in AD 71.

Those comments made me embark upon the writing of a Prequel. At times during the writing process, I was unsure if I should be publishing two short novellas - one about Lorcan and another for Nara. However, I felt that two Prequels to the series might be confusing.

Before Beltane is a book of two halves. The reader learns about Lorcan’s life in the early months of AD 71. The time frame is the same for Nara’s story. When formatting Before Beltane, I decided to intermingle the two stories so – although Lorcan and Nara have no direct interaction with each other – the reader experiences an interlude in Lorcan’s life (a chapter) followed by one for Nara. That process is repeated throughout the book.

Before Beltane is effectively Book 0 of the series.

In Before Beltane, the reader experiences the trials and tribulations of what Lorcan and Nara would term their daily lives, as they undertake the everyday tasks set for them … until those lives are entirely turned upside down! Lorcan’s visit to the Sacred Groves, with the Druid Maran, is terrifying, though the future prophesied for him is thrilling, confusing and heartrending. Nara’s expectations of becoming a fully-initiated priestess of the goddess Dôn are shattered when she’s summoned to the High Priestess. She is thrown out of the sacred home of the priestesses and must live at her father’s Hillfort of Tarras. The huge problem there is that her father Callan, Chief of Tarras, hates Nara and he orders her to be shunned by all at the hillfort, or they will face severe punishment. Nara must fend for herself but fulfilling her destiny, her promise to the goddess Dôn by the Festival of Beltane, seems so…impossible!

I thoroughly enjoyed creating a backstory for both Lorcan and Nara and hope that readers will enjoy this glimpse of them, too. It explains quite a bit about why they are the way they are at the beginning of the series in Book 1. 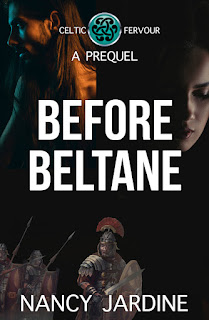 At the Islet of the Priestesses, acolyte Nara greets each new day eager to heal the people at Tarras Hillfort. Weapon training is a guilty pleasure, but she is devastated when she is unexpectedly denied the final rites of an initiated priestess. A shocking new future beckons for Princess Nara of the Selgovae…

In the aftermath of civil war across Brigantia, Lorcan of Garrigill’s promotion of King Venutius is fraught with danger. Potential invasion by Roman legions from the south makes an unstable situation even worse. When Lorcan meets the Druid Maran, the future foretold for him is as enthralling as it is horrifying…

Meet Nara and Lorcan before their tumultuous meeting of each other in The Beltane Choice, Book 1 of the acclaimed Celtic Fervour Series.

An ex-primary teacher who published local history projects, Nancy spends her retirement writing historical and contemporary fiction. All historical time periods appeal immensely but so far Roman Britain (and a teensy bit of Victorian and Edwardian in contemporary mysteries) has won the day! She loves to interact with her readers when regularly signing/ selling paperback versions of her novels at local Craft Fairs, and at larger event venues. She enjoys presenting author talks and gives formal presentations on her novels, and on Ancient Roman Scotland, to groups large and small.

She’s a member of the Historical Novel Society; Scottish Association of Writers; Federation of Writers Scotland; Romantic Novelists Association and the Alliance of Independent Authors. She’s self-published with Ocelot Press. Current writing is historical fiction which begins in 1850s Scotland.

You can find her at these places: 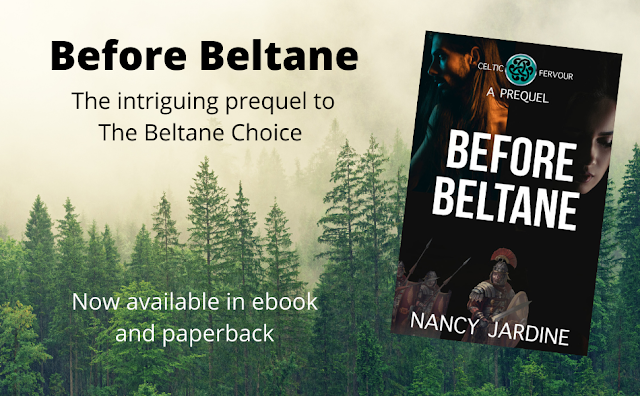