Review: Whispers of the Runes by Christina Courtenay

Today, I'm delighted to share my review of Whispers of the Runes, the third in a Viking timeslip series by historical fiction author, Christina Courtenay, as part of a blog tour with Rachel's Random Resources.

My thanks to Rachel's Random Resources and the author/publisher for an advance copy.

Whispers of the Runes

Whispers of the Runes is part of a series, and I've enjoyed the previous two books, particularly The Runes of Destiny, and I was pleased to see characters from that story return, especially Linnea and Hravn. But it can also be read as a standalone, without any problems.

So I knew already that Sara was still recovering a severe accident that left her with physical scars. The mental scars took her much longer to heal, as is revealed in the plot.

Sara knows of her best friend Linnea's travels to the past and her new life in the Viking age, so when she is sent back in time after finding a beautiful seax in an archaeological dig, she is at first stunned, but then realises what had happened. What were the chances?!

On arrival on the coast in Viking age Northumbria, she is immediately confronted by Rurik who is furious as to how she got her hand on a weapon he had just deposited in a grave, following a shipwreck. But as he is Hravn's brother, he has a sneaking suspicion that whatever happened to Linnea was also happening to Sara. She'd travelled through time.

A silversmith, Rurik was on his journey to Jorvik (York) to ply his trade. He'd escaped from his home, having considered himself in love with his brother's stunning wife, Linnea. Convinced he'd never fall in love again, he plans to carve out a life by himself in the vibrant town. What he hasn't counted on was for his protective instincts to kick in when he realised the precarious position Sara finds herself in. He threw the seax into the sea, and in doing so was responsible for her staying in his time.

But Sara, also a specialist in Viking and Anglo-Saxon jewellery, is keen to see first hand the beautiful items made at the time, so convinced him to take her to York, even after he found the seax. Hiding it from her until she was ready to go back, they are soon on their way.

But the journey doesn't work out as planned as they are caught by Asmund, a particularly nasty group leader of the marauding Great Heathen Army – groups of Norsemen that pillaged the Northumbria and Mercian countryside. Asmund is the typical ’baddie’. He is a nasty piece of work who has his eye on Sara, triggering Rurik's protective instinct.

The Great Heathen Army really existed, and Ms Courtenay described their journey across eastern English shores very well. In that part of the plot, she weaves real historical characters into the action, which works very well. Her research is impeccable.

As the large army rests over winter, Rurik is able to set up a silversmithy, and is surprised at Sara's abilities. Soon, they work together. Then, Halfdan, the leader, moves north, and Rurik and Sara are finally able to go to Jorvik. But they're not made welcome by some of the locals, and their troubles with Asmund continue...

I love Rurik. He is such a three-dimensional character, and I thought he is the perfect lead. A trading Norseman rather than a warrior – even though he knows well how to fight – he is a calm, sensible character, but still a man of his time, with his own beliefs that Sara often finds abhorrent. But his kind, caring nature and quiet determination soon makes her fall in love with him, despite her concerns. For me, Rurik is the star of the story.

But I'm afraid I've had my issues with Sara. I found her too naïve at times. Yes, Viking practices were shocking to modern sensibilities, but she was so clueless, I wanted to tell her to get real. None of us would appreciate human or even animal sacrifices, of course, but her reaction to a hare he'd caught for their meal, and to the other animals slaughtered for food, made me think of children believing meat on supermarket shelves just comes from a factory, not from living animals. Equally about her cleaning tick. Whilst it was necessary, especially compared to 21st century standards, her attitude appears like that of a spoilt child. I'm afraid I did not find her likeable, and if I'd been Rurik, I'd have sent her back home. But he's a good, patient man...

I did love Beowulf, the dog they'd found at a homestead where the owners had been killed. He is a wonderful addition to the story, and he protects them well.

Whispers of the Runes has an engaging plot. A little slow in the beginning, the pace soon picks up and sweeps you away into a great adventure. Not quite the journey we saw in The Runes of Destiny, but there is still plenty of Viking and Anglo-Saxon life to make this story gripping. Ms Courtenay often uses Old Norse terms, which she then goes on to describe, and whilst I found it fascinating, it did take me out of the story once or twice. A glossary may have been handy (and there might still be one in the final version).

I enjoyed reading Whispers of the Runes, but for me it didn't reach the same level of engagement I felt when I read The Runes of Destiny. But I would still recommend it for readers of timeslip and Viking romance.

Whispers of the Runes 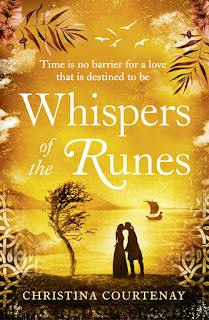 Time is no barrier for a love that is destined to be.

She couldn’t be sure that she had travelled through time … but deep down she just knew.

And her only way back had just disappeared.

When jewellery designer Sara Mattsson is propelled back to the ninth century, after cutting herself on a Viking knife she uncovers at an archaeological dig, she is quick to accept what has happened to her. For this is not the first Sara has heard of time travel.

Although acutely aware of the danger she faces when she loses the knife – and with it her way to return to her own time – this is also the opportunity of a lifetime. What better way to add authenticity to the Viking and Anglo-Saxon motifs used in her designs?

As luck has it, the first person Sara encounters is Rurik Eskilsson, a fellow silversmith, who is also no stranger to the concept of time travel. Agreeing that Sara can accompany him to Jorvik, they embark on a journey even more perilous than one through time. But Fate has brought these two kindred spirits together across the ages for a reason…

Christina Courtenay writes historical romance, time slip and time travel stories, and lives in Herefordshire (near the Welsh border) in the UK. Although born in England, she has a Swedish mother and was brought up in Sweden – hence her abiding interest in the Vikings.

Christina is a former chairman of the UK’s Romantic Novelists’ Association and has won several awards, including the RoNA for Best Historical Romantic Novel twice with Highland Storms (2012) and The Gilded Fan (2014).  Whispers of the Runes (time travel published by Headline 24th June 2021) is her latest novel.

Christina is a keen amateur genealogist and loves history and archaeology (the armchair variety). 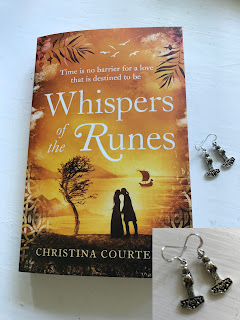