I'm delighted to share my review for The Highlander's Secret Son by Jeanine Englert.

My thanks to Rachel's Random Resources and the author for a copy of the book.

As it turns out, Brandon has a son he didn't know of. Shocked, but with a strong sense of wanting to protect his own, he takes mother and child back to his castle. But his folk are against her staying there. After all, she betrayed them, and many were killed as a result, including the wife and son of Brandon's elder brother, the former laird. Rowan had lost his wits as a result, and Brandon was tasked with leading the clan.

Now, with Fiona and their baby, William, ensconced in the walls of their castle, Brandon has a hard task at hand, reconciling the wishes of the elders, and the clan, with his own feelings for Fiona and his boy.

Fiona and Brandon had been close, before the attack by the MacDonalds, allowed into the castle through treachery. Everyone blames Fiona who soon realises the magnitude of her naivety in having trusted her father.

Against this backdrop of clan animosity, we meet two characters who are trying to find their own place in their world. Fiona had fled her clan to raise her son with distant relatives when Brandon caught her. Her feelings for Brandon have not diminished, but she knows her presence at his castle spells trouble for him.

When Brandon is forced to marry Susanna Cameron, Fiona flees. Through a clever twist, Brandon has enough men to chase after her. But with her father holding her and the baby, will be be on time?

The Highlander's Secret Son is a story of love, and of redemption. Brandon is a likeable character, keen to improve his clan's fate. He is fully aware of his responsibilities. He may lack the toughness needed by a clan chief, but he's loyal and fair.

Fiona is a troubled soul. Hated by her own father and abandoned by her mother, Brandon had been her only friend. After her father's attack on Brandon's stronghold, she'd suffered under his hand until she was able to flee. All she wants is a place of safety for herself and her son.

The setting in Glencoe is beautifully described. I know the area well, having visited many times. Even though some distances are greater than described and would take longer to travel, in the context of the plot this didn't matter too much.

The main issue I had with the plot was the clans. As someone who'd studied the era, and the well-known troubles between clans MacDonald and Campbell, I didn't find the clans’ positions credible. The massacre of Glencoe was still fresh in people's minds then, as were the politics and political affiliations of the times. Also, a MacDonald baby called William seems a bit of a strange choice.

In my view, had the author chosen minor clan names, their actual historical background wouldn't have stuck out so much. As it was, I found them a distraction from the otherwise intriguing plot. However, if I regard the novel as a fantasy romance, it works better for me. But that's my personal view.

The Highlander's Secret Son is a moving tale, with several clever, unexpected twists woven in near the end. The pace is fast, and the plot moving. 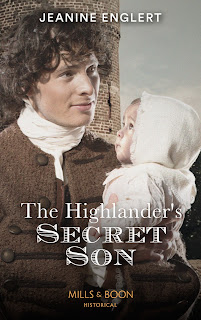 What is Fiona MacDonald doing on the run across his lands? With a wee baby as well! Brandon once loved this woman with all his heart―until her family killed many of his clan.

Now, as the new Campbell Laird, he must make sure she pays the price for her betrayal. But how can he claim his vengeance if what she says is true…?

That her child is his son and heir! 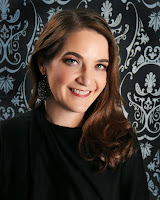 Jeanine Englert’s love affair with mysteries and romance began with Nancy Drew, Murder She Wrote, and her Grandmother’s bookshelves full of romance novels. She is a Golden Heart ® Finalist, Silver Falchion, Maggie, and Daphne du Maurier Award Winner in historical romance and mystery.

Her Scottish Highland historical and historical romantic suspense novels revolve around characters seeking self-acceptance and redemption. When she isn’t wrangling with her characters on the page, she can be found trying to convince her husband to watch her latest Masterpiece or BBC show obsession.

She loves to talk about books, writing, her beloved rescue pups, as well as mysteries and romance with other readers.

Giveaway to Win  A bundle of Highland Treats (Open INT)

1) One signed paperback copy of The Highlander's Secret Son. 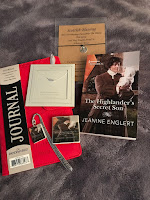 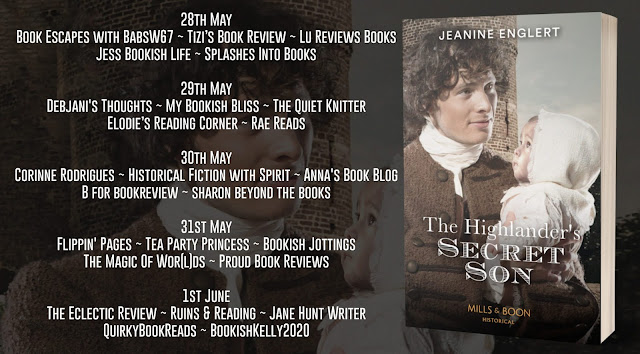