I'm thrilled to take you back to the times when Vikings roamed the coasts with my review of The Viking Chief's Marriage Alliance by Lucy Morris.

So wrap up warm and prepare to meet the Vikings!

In The Viking Chief's Marriage Alliance, we are thrown straight into the action when Thorstein comes to the rescue of shipwrecked men – and a woman whose whole demeanour exudes high rank. When Gyda cries over the loss of her silver, he deems her shallow and after wealth and trinkets. Not a bride for the likes of him, chief of a small settlement.

Recently widowed and thus finally released from an unhappy marriage, Gyda's hope to reach Jorvik to set herself up by weaving tapestries is shattered. She's mourning the loss of her wealth as it permitted her some sort of independence. Now she would have to rely on her former brother-in-law, once she reaches the important city.

But first she has to face her rescuer, Thorstein, who confuses her. Kind and caring towards his people, he is dismissive of her. She recognises an attraction, but her past makes any men untrustworthy, so she is relieved when they soon after travel to Jorvik. where they meet Sven, the husband of her late twin sister. As it turned out, Sven is also Thorstein's overlord, and he owes him a debt from a time when Thorstein was caught in battle to save Sven's life. Thorstein was branded with a cross on his cheek as a result.

Sven's wife is not too keen on having beautiful Gyda near her husband, as she reminds him of his lost first love. So, as they were considering potential wives for Thorstein, they come to the conclusion that Gyda would fit the bill perfectly. Thorstein would gain a wife, and Gyda would be lady of his settlement, and not on Sven's doorstep.

So Thorstein and Gyda are wed, even though he still considers her shallow and thinking she'd not be happy as the wife of a chief of a small settlement. He gives her until Yule, and on their return, he ensures he's always busy. In the meantime, Gyda transforms the settlement with her knowledge and experience.

But will it be enough for him? When danger lurks from a man from her past, Thorstein must make his choice.

The author has researched both the era and the setting very well. She describes bustling Jorvik (York), and the way of life in a Viking settlement, showing many Norse settlers were happy to farm the land to make their living.

Both characters are strong-willed, so of course they clash. That creates a lot of intriguing tension. With Gyda's past, and Thorstein's own history, they have to overcome a series of obstacles – external but mostly internal – to be with each other. His dismissive attitude towards her seemed unrealistic at times, especially when she improved the running of the settlement. He seems to be happy hiding away, not seeing everything she's doing. I thought him a bit ungrateful at times.

Gyda is a strong woman, but scarred from her past. She lost her whole family, and then her wealth, so it's not surprising she fears for her future. I really enjoyed the challenges thrown her way.

The Viking Chief's Marriage Alliance is a fast-paced tale full of vibrant Viking life, of internal struggles to be overcome, with a likeable cast of characters. Well worth a read! 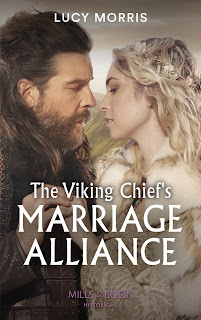 For a warrior Viking

When Thorstein Bergson rescues a beautiful woman from a storm-tossed longship he little expects to broker a powerful marriage alliance with her.

This high-status ice queen is not the comfortable wife this warrior chief is seeking, but maybe the bittersweet pain in Gyda’s eyes hides another woman beneath?

The one he tasted that first night, when she kissed him with such pent-up longing…

Lucy Morris lives in Essex, UK, with her husband, two young children and two cats. She has a massively sweet tooth and loves gin, bubbly and Irn-Bru. A member of the UK Romantic Novelists' Association, she was delighted to accept a two-book deal with Harlequin after submitting her story to the Warriors Wanted submission blitz for Viking, Medieval and Highlander romances.

Writing for Harlequin Historical is a dream come true for her and she hopes you enjoy her books!