I'm thrilled to share my review for The Serpent King, a thoroughly gripping and fast paced historical adventure by Tim Hodkinson.

My thanks to his publisher, Aries Fiction / Head of Zeus, and Netgalley for an ebook copy as part of their blog tour. 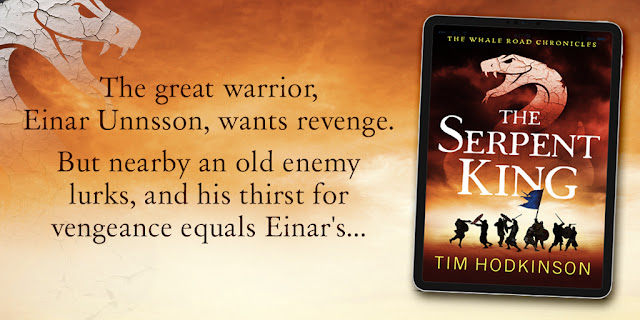 My word, what a ride!

Thrown in at the deep end right at the beginning, I had barely time to take a breath. Immediately, we found ourselves in the action – an attack by the Wolf Coats, a select group of highly trained warriors.

I've not read the previous books in The Whale Road Chronicles (something I’ll have to rectify soon!), so I wasn't familiar with the characters. However, you quickly get to know them all, with all their mannerisms, individual character and foibles.

Einar is on a quest for revenge. His mother was murdered by henchmen sent by his father, Thorfinn of Orkney, and he is keen to recover her stolen head, to give her spirit peace it craves. But first, he has to follow the Wolf Coat leader, Ulrich, a savvy old fighter. Until he seizes a chance he can't miss...

Einar reminded me of a young Uhtred from The Last Kingdom. Headstrong, unwilling to follow orders when his personal choices are telling him to do his own thing, and a penchant for getting himself into trouble. His actions made me laugh out loud a few times, even though the plot is rather serious. As it is, a subtle sense of humour lightens up the tone at times.

And what a gripping plot it is! Tim Hodkinson doesn't make it easy for his characters. The Wolf Coats escape one tricky situation, only to fall into another, and they are forced to shift their loyalty along the way. Old enemies join new ones, including a former Wolf Coat who turns against them. 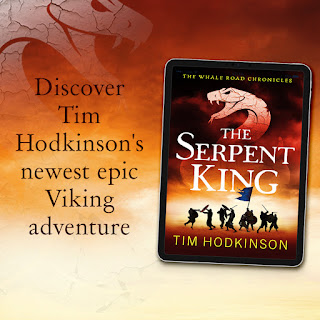 I quickly grew to like the Wolf Coats, and I can't wait to read more of their adventures. Each man has a clearly-defined character, as has the only woman warrior in the group, Affreca, who is faced by a challenge thrown at her by her own brother, the King of Dublin. The group splits to ensure lives are saved, but it almost cost them dearly.

The highlight of the novel for me is a fight, man to man, to the death, set against a most spectacular background, which – thanks to the author's incredible, visual description – was easy to imagine. A real heart-stopper moment! But I won't reveal any more of it. Readers will have to discover the scene themselves.

The Serpent King is a fast-paced, gripping historical adventure set in the rough world of northern Europe in the first half of the 10th century. The plot pulls you along and barely gives you time to breathe. I usually don't like using the word ’unputdownable’, but in this case, it is spot on.

When's the next instalment due??

I thoroughly enjoyed reading The Serpent King, and I shall be looking to catch up with the other books in the series. 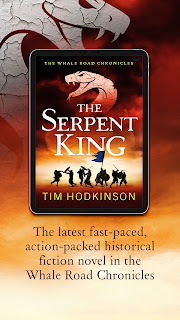 The fight for vengeance has no victors...

The great warrior, Einar Unnsson, wants revenge. His mother's assassin has stolen her severed head and Einar is hungry for his blood. Only one thing holds him back. He is a newly sworn in Wolf Coat, and must accompany them on their latest quest.

The Wolf Coats are a band of fearsome bloodthirsty warriors, who roam the seas, killing any enemies who get in their way. Now they're determined to destroy their biggest enemy, King Eirik, as he attempts to take the throne of Norway.

Yet, for Einar, the urge to return to Iceland is growing every day. Only there, in his homeland, can he avenge his mother and salve his grief. But what Einar doesn't know is that this is where an old enemy lurks, and his thirst for vengeance equals Einar's... 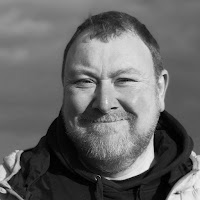 Tim Hodkinson was born in 1971 in Northern Ireland. He studied Medieval English and Old Norse Literature at University with a subsidiary in Medieval European History.

He has been writing all his life and has a strong interest in the historical, the mystical and the mysterious. After spending several happy years living in New Hampshire, USA, he has now returned to life in Northern Ireland with his wife Trudy and three lovely daughters in a village called Moira.

Tim is currently working on a series of viking novels for Aries Fiction, an imprint of Head of Zeus. 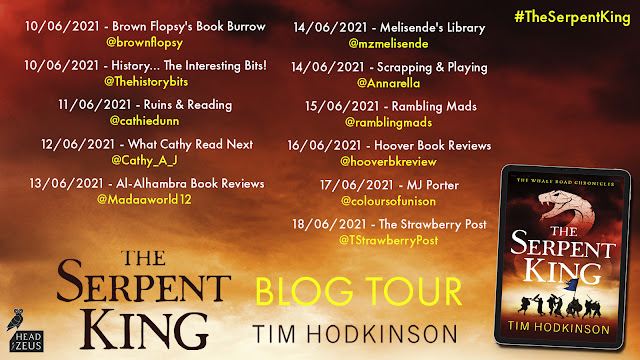