Review: Secrets of Her Forbidden Knight by Ella Matthews

I'm delighted to share my review of Secrets of Her Forbidden Knight, a fast-paced romance adventure by Ella Matthews.

My thanks to Rachel's Random Resources and the author for a copy. Make sure to check all the other fabulous stops on the blog tour!

Lady Johanne is widowed, in charge of her late husband's castle, and mother to his young heir. After an unhappy marriage, she vows never to wed to a man again – nor to hand over the reins of her castle of Brae to another. But her life is in danger, and opportunists surround her.

When she and her steward find an injured man, clearly a warrior, unconscious and injured on a path near their home, they take him with them. They could do with a strong man about the place. But little does she know...

When Sir Alewyn wakes, he finds himself in a strange place, his whole body sore. And he's lacking part of his memory. If only the lady who rescued him would stop asking so many questions! As his memory slowly returns, he realises that he was sent on a mission to Brae – a mission involving the woman who saved his life.

Ms Matthews has created two very complex characters in Johanne and Alewyn. After her dominant husband's death, Johanne is overly confident, to the point of stubbornly refusing any male advice. Whereas Alewyn may be a fighting machine, but compared to his fellow knights, he considers himself unworthy.

Through the story, it's the character development that struck me the most. In having to deal with one another, despite keeping secrets from each other, both learn that their own opinions of themselves may not be quite correct, and that there is yet hope for them. It was cleverly done.

But it's not all about the two protagonists and their self-doubts. An array of suspicious antagonists, and the threat of the looming war with France, adds substance to form a fast-paced, adventurous plot that grabs you from beginning to end.

I found the characters believable, and likeable. I wanted to know what happened to them, and how they would extricate themselves from the web they'd spun around their hearts.

The only thing that kept throwing me out of the story was the diminutive of his name Alewyn gave after waking: Al. It sounded too modern for me, and after he'd introduced himself with ’Call me Al’, I had a certain 1980s tune in my head for the remainder of the read, which was distracting.

But overall, I thoroughly enjoyed Secrets of Her Forbidden Knight. I'm partial to medieval romantic adventures, and this is a gripping, engaging story with plenty of hooks and twists. A quick but intensive read. Highly recommended. 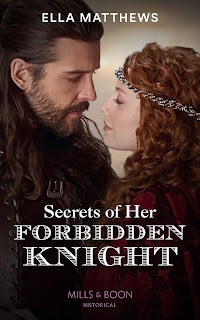 Now she needs the favour returned…

When widowed Lady Johanne happens upon an injured knight, she sees an opportunity to form an alliance and protect her home, Castle Brae, from her enemies. The betrothal she proposes might be merely for appearances, but the very real attraction between her and Sir Alewyn thrills and disturbs her. For it’s clear he’s hiding something…

Can she trust him, with so much at stake?

When not thinking about handsome heroes she can be found walking along the coast with her husband and their two children (probably still thinking about heroes but at least pretending to be interested in everyone else). 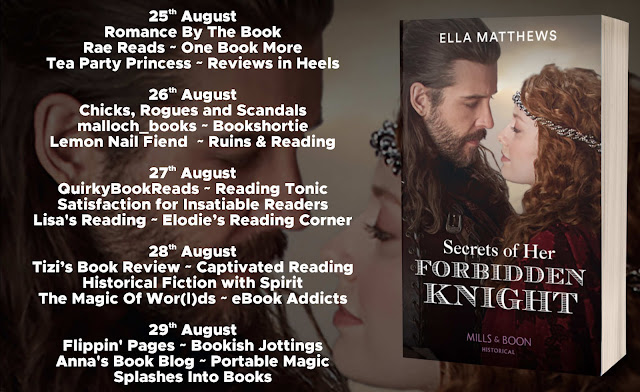