Review: Hidden in the Mists by Christina Courtenay

It's an absolute pleasure for me to share my review of Christina Courtenay's latest romantic Viking adventure, Hidden in the Mists.

My thanks goes to Rachel's Random Resources and Headline Publishers for a copy.

I've so far read all of Ms Courtenay's recent timeslip/dual-timeline Viking novels, and Hidden in the Mists is one of her best. I loved it.
Not a timeslip, but a dual-timeline novel, Hidden in the Mists tells two parallel tales, one in the present day and another in AD 883 / 890. The location of this set of stories is on the west coast of Scotland, in rural Argyll.
In the present day, we have Skye, recently separated from her ogre of a husband, Craig, after they started a new life in the remote countryside, away from the hustle and bustle of Edinburgh. She loves her little haven, but it's hard work, and she is struggling. When handsome Rafe turns up in his battered old camper van, looking for work, she reluctantly accepts his offer as she realises she needs the help. Soon, they fall into a routine as he helps with the work on her extension to create a holiday let. She keeps the news of the separation from her husband from him, being careful. But Rafe has secrets of his own, and those unravel as the story progresses.
Unbeknownst to each other, both spot what must be ghosts on the shoreline, and their dreams merge a distant past with the present. Drawn to each other, their budding friendship, and then relationship, reveal the secrets ’hidden in the mists’...
In the past, young Ásta's dying father admits to having been responsible for the deaths of defenceless women and children during his raids along the coast. When, following his death, her cousin, Ketill, takes over the settlement contrary to the agreement with her father that she would be in charge, she lets him get away with it out of fear. But feeling responsible for the people, she decides not to turn to her mother's tribe for help. But help appears from unexpected quarters - the young blacksmith, Óttarr, a former thrall but now a freeman turns out to be on her side. But he also has a secret, one that involves his quest for revenge against Ásta's family.
The two stories overlap nicely, with both couples facing similar challenges, despite the difference in time. Tension builds up slowly and realistically, culminating in moments of grave danger in both stories. An error of judgment is revealed that affected Rafe's life, and explain his existence in his camper van. This brings danger to Skye's door, but everything is neatly tied up in the end.
In the past, Ásta and Óttarr have to face down scheming Ketill, which leads to events neither expected.
Hidden in the Mists is a fabulous tale of feeling left alone, dealing with unexpected challenges, finding someone equally as complicated, and forging a path together. The stories run nicely alongside each other, and it was easy to slip from the present into the past and back.
The characters were all realistic, with their worries, fears, and suppressed anger, and Ms Courtenay dealt with their issues sensitively but realistically. The location is, of course, breathtaking, and Ms Courtenay's research (from dyeing wool to forging weapons) is impeccable.
My only snag would be that Skye sounds too English when she speaks. Whilst the author has woven some lovely, everyday Scots words into Skye's dialogue, for me, they weren't enough to portray Skye as Scottish. (But I know that writing in dialect can go badly wrong for non-Native authors, and I'm glad Ms Courtenay did not try to go down that rabbit hole.) It won't be an issue for most readers, who will likely rather enjoy the odd Scots word thrown in.
The other point was that some modern words crept into the dialogue and narrative of the Viking past. It's easily done when you write two parallel stories, but a few words threw me a little. But these were minor points, and happened rarely. Ms Courtenay knows how to write gripping and realistic dual-timeline and timeslip stories very well.
Hidden in the Mists is one of my favourite novels in that series. It's gripping, engaging, fast-paced, and with scenes of very high tension. The love stories evolve naturally, and the challenges faced by all four main characters are set firmly in their own times.
A truly wonderful novel.
~~~
Blurb:
A love forged in fire lives on through the ages 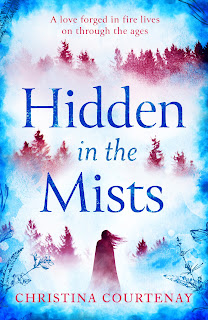 She stared at the man again. Was he real? Her mind returned to the ghostly figure by the shore and to her strange dream. No, he was not a figment of her imagination.
Skye Logan has been struggling to run her remote farm on Scotland’s west coast alone ever since her marriage fell apart. When a handsome stranger turns up looking for work, it seems that her wish for help has been granted.

Rafe Carlisle is searching for peace and somewhere he can forget about the last few years. But echoes of the distant past won’t leave Skye and Rafe alone, and they begin to experience vivid dreams which appear to be linked to the Viking jewellery they each wear.

It seems that the ghosts of the past have secrets . . . and they have something that they want Skye and Rafe to know.
Buy Links:
UK - https://www.amazon.co.uk/Hidden-Mists-sweepingly-romantic-dual-time-ebook/dp/B09KZMP8B2
US - https://www.amazon.com/Hidden-Mists-sweepingly-romantic-dual-time-ebook/dp/B09KZMP8B2
~~~
About the Author:

Christina Courtenay
Christina Courtenay writes historical romance, time slip and time travel stories, and lives in Herefordshire (near the Welsh border) in the UK. Although born in England, she has a Swedish mother and was brought up in Sweden – hence her abiding interest in the Vikings.

Christina is a former chairman of the UK’s Romantic Novelists’ Association and has won several awards, including the RoNA for Best Historical Romantic Novel twice with Highland Storms (2012) and The Gilded Fan (2014) and the RNA Fantasy Romantic Novel of the year 2021 with Echoes of the Runes. Hidden in the Mists (timeslip/dual time romance published by Headline Review 18th August 2022) is her latest novel.
Christina is a keen amateur genealogist and loves history and archaeology (the armchair variety).

Giveaway to Win a signed copy of Hidden in the Mists,
Viking tea-towel and Viking carved butter knife (Open INT) 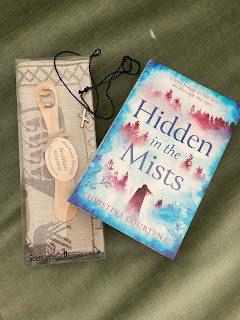 *Terms and Conditions –Worldwide entries welcome.  Please enter using the Rafflecopter box below.  The winner will be selected at random via Rafflecopter from all valid entries and will be notified by Twitter and/or email. If no response is received within 7 days then Rachel’s Random Resources reserves the right to select an alternative winner. Open to all entrants aged 18 or over.  Any personal data given as part of the competition entry is used for this purpose only and will not be shared with third parties, with the exception of the winners’ information. This will passed to the giveaway organiser and used only for fulfilment of the prize, after which time Rachel’s Random Resources will delete the data.  I am not responsible for despatch or delivery of the prize.
<a class="rcptr" href="http://www.rafflecopter.com/rafl/display/33c69494516/" rel="nofollow" data-raflid="33c69494516" data-theme="classic" data-template="" id="rcwidget_rznmxblk">a Rafflecopter giveaway</a>
<script src="https://widget-prime.rafflecopter.com/launch.js"></script>