I'm thrilled to share an enticing excerpt from Kindred Spirits: Regal Retribution, the latest instalment in my lovely author friend, Jennifer C. Wilson's wonderfully spooky series about a bunch of blue-blooded ghosts and their shenanigans.

The latest plot is a little edgier, with a threatening presence unsettling our ghosts. Can they unmask the unwelcome intruder? I've had a sneaky preview, but I'm not giving anything away...

Kindred Spirits: Regal Retribution is currently on blog tour with Rachel's Random Resources. Make sure to check out all the other fabulous stops on the tour!

With attacks happening across London, a plan is required. And so a plan is devised. Machecoul is a small town in western France, and notoriously, the Castle of Machecoul was home to Gilles de Rais, an infamous murdered in the 15th century, who committed terrible crimes up at the castle. The tale of de Rais was the centre-point of a short story I wrote last year, about the possibility of ghosts deliberately attacking another ghost, in an attempt to fade them, or cause them to permanently vanish. Whether it works or not is up for debate (you’ll have to read the short story…).

Of course, the ability to kill a ghost spreads as a rumour, and when problems arise in London, it’s only a matter of time before somebody suggests giving it a go.

“Surely this has now gone too far?” Richard demanded of the Confessor, once he had delivered news of the attack. “We are well past the stage of keeping watch.”

The Confessor, his hands together as though in prayer, placed them against his forehead, eyes closed. “I don’t know what else we can do.”

“I do,” replied Richard. He steeled himself for what he was about to say, knowing it was as controversial as it got for ghosts. “You’ve heard what happened in Machecoul. You must have done.”

The whispered question reminded Richard that Mary-Eleanor was still with them in the shrine, but he still pressed on. “I cannot think of anything else we can try.”

The incident at Machecoul had become legendary, even in the mere handful of years since it had happened. A coordinated attack on a spirit which had struck terror into the hearts of ghosts throughout France and beyond. Gilles de Rais, a notorious abuser and murderer, had been defeated, or at least that was what the rumours said. All anyone knew for certain was that he hadn’t been seen since the villagers of Machecoul had banded together and done their best. Or worst, depending which way you looked at it.

“You are suggesting we deliberately attempt to fade the ghost of our tormentor, as retribution for what he’s been doing?” Mary-Eleanor clarified.

“Do you have any other suggestions?” Richard looked at them both, one eyebrow raised in question.

The Confessor sighed, but slowly shook his head. “It would need to be done with care, though,” he said, his voice barely audible. “If it is truly Henry the Eighth, which seems painfully obvious at this stage, then I think there are some important conversations to be had with some key people.”

Richard nodded. “I spoke to Tudor a few weeks ago, and I feel I should speak to him again.”

“I’ll come with you, if you like,” offered Mary-Eleanor. “I’m more neutral than either of your wives, or anyone else. After all, I have no connection to either Henry; perhaps that would help?”

“Thank you. I have a feeling you’re right. Taking anyone too close to him, historically-speaking, may only hinder things.” Richard clapped his hands together, startling poor Blackie, who had settled down during the quiet of the conversation. “No time like the present?” He was already in Westminster, and he still had enough of his anger at Katherine’s attack flooding what would have been his veins, if he had them. This was as good a time as any to have yet another terrible discussion. 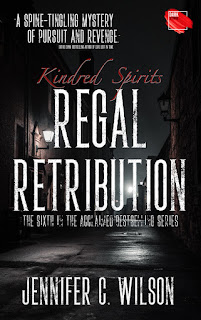 Blurb:
A visit to London’s West End sends an already angry ghost into a fury, vowing revenge on those he believes have wronged him in life (and in death).
Soon, the attacks begin – across the city and beyond – revealing that rarest of beings: haunted ghosts!
When a pattern starts to emerge, a council is established to formulate a plan, but can they work out who is behind the hauntings? As the severity escalates, can the combined force stop the avenging spirit, before the worst happens?
Bringing together the ghostly communities of the Tower of London, Westminster Abbey and other places, discover friendships and feuding in the race to retaliation…
Buy Links:
US – https://www.amazon.com/dp/B0B3238S5Y/
UK – https://www.amazon.co.uk/dp/B0B3238S5Y/
~~~
About the Author:
Jennifer C. Wilson
Jennifer has been stalking dead monarchs since she was a child. It started with Mary, Queen of Scots, then moved onto Richard III. At least now it results in a story! 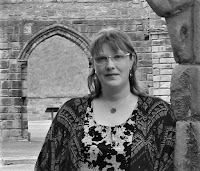 She won North Tyneside Libraries' Story Tyne short story competition in 2014 (no dead monarchs, but still not a cheerful read), and has been filling notebooks and hard-drives ever since. Her Kindred Spirits series, following the 'lives' of some very interesting ghostly communities, is published by Darkstroke, and her historical romances by Ocelot Press.
Jennifer is currently exploring some new ideas for historical romance, and hoping to visit Kindred Spirit friends old and new, north of the border...
Connect with Jennifer:
Twitter: https://twitter.com/inkjunkie1984
Facebook: https://www.facebook.com/jennifercwilsonwriter
Instagram: https://www.instagram.com/jennifercwilsonwriter/
Blog: https://jennifercwilsonwriter.wordpress.com/
Amazon: https://www.amazon.co.uk/Jennifer-C-Wilson/e/B018UBP1ZO/ 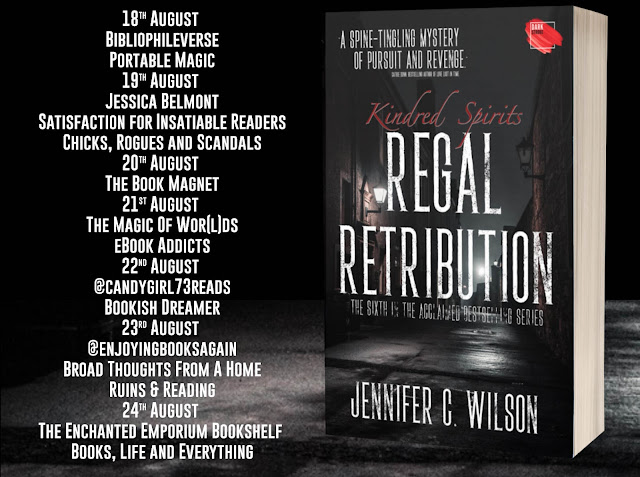