Yay! I finally got to visit a castle again. This time it was one that'd been on my list for years: the medieval castle of Foix, set surrounded by hills in the beautiful Ariège, at the base of the Pyrenees. 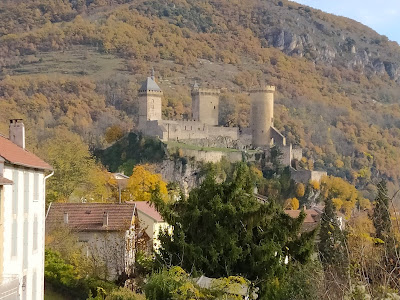 Throughout the Middle Ages, the county of Foix was of high importance. Together with the counts of Toulouse, Foix ruled over a vast area – an area the French kings had their sights on for a long time, and which they eventually incorporated.

The site dates back to Visigoth times, and was recorded as a fortification in the early Middle Ages, which may have belonged to the county of Carcassonne early on.

Foix is not only surrounded by wild hills, with views of the Pyrenean peaks, but also a centre of Occitan traditions. Folklore, troubadours, music, and poetry all flourished there, as they did in Toulouse. 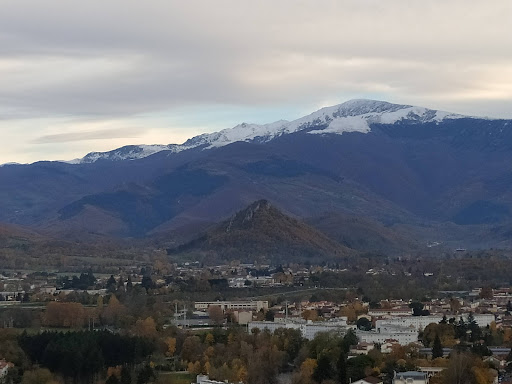 The counts were an interesting bunch. As so often in this region, they tended to share the same names, which is very confusing when you write historical fiction. Well, for the poor readers, that is.

One, Raymond-Roger, is featured in my Loup de Foix mysteries, a medieval murder mystery series I'm still working on. He was a renowned orator, poet, and knew the law. When his friend and cousin, the count of Toulouse, was excommunicated by the Church for harbouring heretics (the famous Cathars), Raymond-Roger led a rousing speech in Rome in his friend's defence. 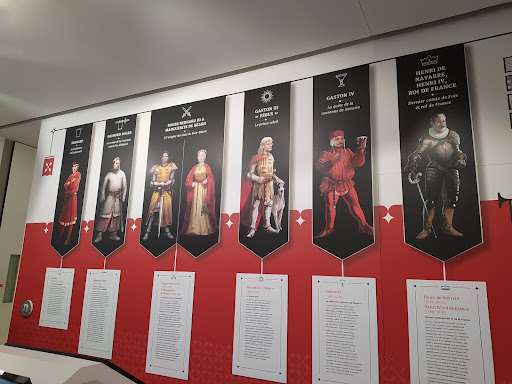 It has to be said that Foix *may* have sheltered Cathars, because it was not as hotly contested as Montségur, Minerve, Lastours, and other impotant Cathar sites. Simon de Montfort, crusader-in-chief tasked by the king, never managed to capture it, like he had done with Carcassonne, and other sites. He had his eye on the county of Toulouse, but was thwarted by the Pope when he reinstated the Count Raymond of Toulouse his domains. Those were the politics of the day. Win some, lose some.

Raymond-Roger's wife, Philippa de Montcada, became a Perfect, a Cathar preacher, as was his famous sister, Esclarmonde. She delivered a passionate speech at the Conference of Pamiers in 1207 – the last face to face exchange of views between the Cathars and the Catholic Church. She became a highly respected, and outspoken, Prefect.

The hero of my murder mystery series, Loup de Foix, is also real. He was an illegitimate son of Raymond-Roger, who was not known to be faithful to his wife. But she seems to have taken him in, as Loup was accepted within the household, and was later married to the heiress of an estate at nearby Saverdun.

The counts of Foix appeared to enjoy their independent status, not allowing any kings of France to annex their county for many centuries – until their own influence grew. Later, they became kings of Navarre, and eventually, with Henry IV, the first Bourbon king ascending the throne of France, they brought their county into the fold.

The castle sits atop a rocky outcrop and overlooks the town of Foix and the surrounding countryside. It's a very impressive sight! Rolling hills dot the wider area, and the peaks of the Pyrenees show how close the kingdom of Navarre was, just on the other side. The region was always at the centre of a tug-of-war between French and Spanish kingdoms and earldoms. Whoever controlled the mountain passes had a distinct advantage.

There are now three distinctive towers: one is a watch tower and one used to be a residential tower, until the family abandoned the old, draughty place for more comfortable surroundings in Pau, in the Béarn. Later, Foix became a political prison. Graffiti from notable prisoners can still be seen. 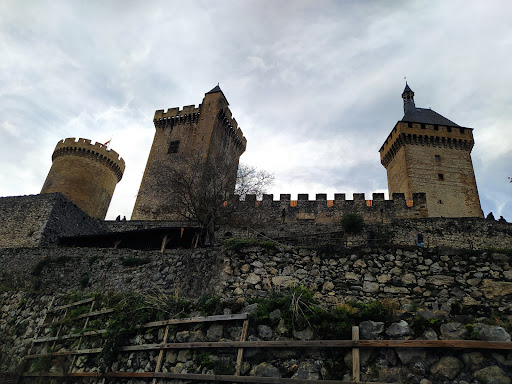 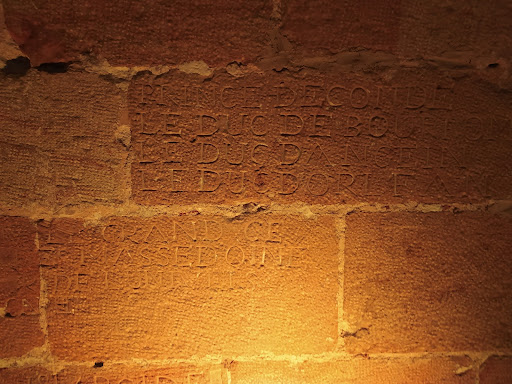 Despite the November chill, it was still busy. Only open at weekends out of season, they yet gave us several reenactors. One guy showed us medieval weapons – such as a crossbow, a longbow, and swords – and operated a trebuchet. A woman talked about how they used to build castles like Foix, and what was involved. 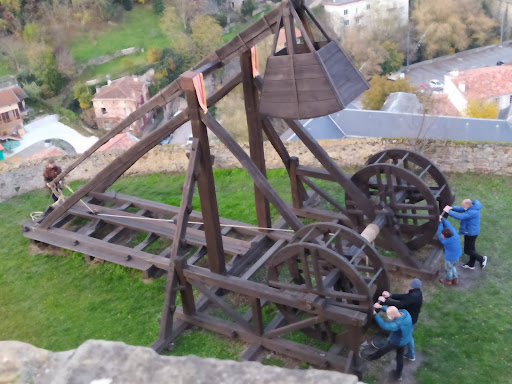 It was a packed afternoon, but very interesting, though hiking up three flights of tower stairwells, wearing a mask, is not the easiest, and I was glad for the fresh air (and the few people) at the top.

In the residential tower, I sat a while, taking it all in. I imagined Raymond-Roger, Loup, Philippa and even Esclarmonde having a meal in the hall with their extended family, watching the count dispense justice in the same hall, and retire to the couple's private room upstairs. 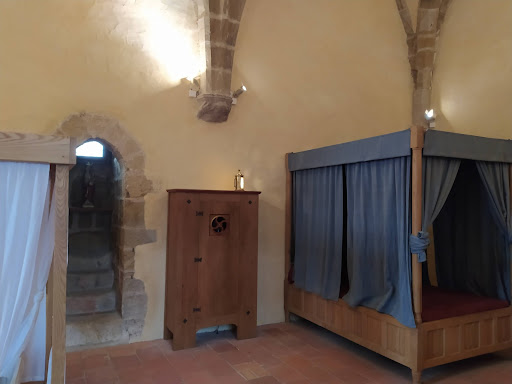 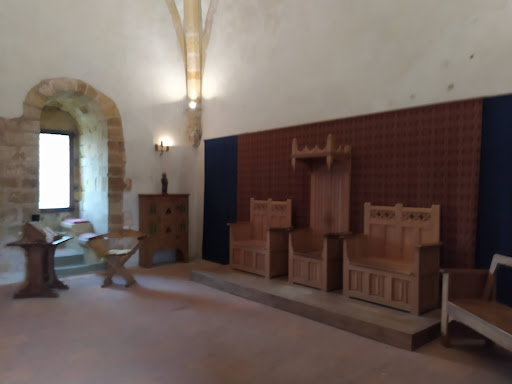 Guards would have occupied another tower, where the dungeon was located, and I guess lodgings in a third tower were for their older children, such as Raymond-Bernard, the heir, and Loup. Other folk would have lived in other buildings within the compound, or in the village which itself dates back to early medieval times. 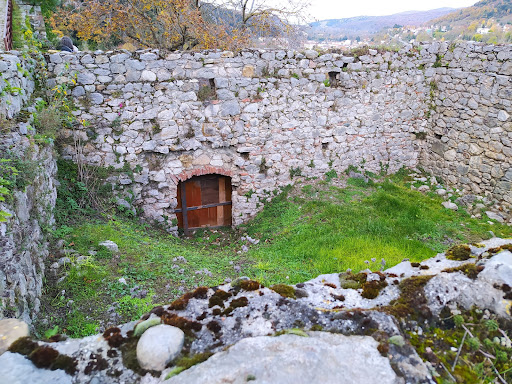 The whole place had a great sense of history to it. I felt comfortable and at home. I do like it when that happens. It means I connect better to its past.

On arrival, you also have access to an excellent exhibition about the history of the counts of Foix, and the wider area. Lots of interesting displays, video and audio recordings give a deeper insight. Those rooms alone, on three floors of the former Palais de Justice, take a good hour at leisure to explore.

Sadly, the otherwise well stocked books section in the reception area didn't have much about the actual castle or its inhabitants. Perhaps something to be remedied when I eventually get around to publishing my Loup de Foix mysteries (en français!)...