Review: The Marquess Next Door by Virginia Heath

I'm excited to share my review for The Marquess Next Door, another fabulous romance novel by Virginia Heath, as part of its publication day push with Rachel's Random Resources.

My thanks to Rachel and the author/publisher for a copy.

The Marquess Next Door

I was thrilled to have had the chance to read and review the novel about the second Brookes sister, Hope. I did enjoy Faith's story very much, so I knew I was in for a treat.

You see, the Brookes family is rather unusual (with an opera singer mother and a painter father), so it's no surprise the sisters are such fascinating characters. Hope is no exception. She is an aspiring writer. But being a female had its downsides in Regency days.

Hope also has another ’problem’ – she is rather curvaceous, which means all the lascivious lords are paying attention to her bosoms rather than herself. And given the cut of the gowns in those days, I'm not surprised.

So Hope is quite put off by men when she escapes into the gardens at Faith's engagement evening. But there, yet another lord is lurking, rather drunk, but this one is not staring at her chest. But when another unwanted admirer finds her, she asks her new acquaintance, Luke, to help her. He does it by kissing her – and ends up sprawled in the fountain!

I liked Hope a lot. She's feisty, uncompromising. She knows what she doesn't want. And she doesn’t want a man!

Well, along comes Luke, or the new Marquess of Thundersley – the man she pushed into the fountain – moving into the vacant house next door. By pure chance, of course. They discover that their balconies are quite close, and after initial reluctance, she realises that Luke is great to talk to. He's a good listener, and he seems to understand her predicament as a writer.

Luke has no time for a wife. His mother is what's widely considered unstable, so their life in faraway Cornwall, where he operated a lucrative slate business, was quiet, until now. When he unexpectedly inherits the marquessate from his late brother who'd despised him all his life, and who had Luke's mother locked up when he was under age and unable to help her, he knows he has to be in London, and worries about the effect on his mother.

With her past, Luke knows that a potential wife would have to deal with the issue too, something he doesn't feel comfortable with. He is highly protective of his mother, almost smothering her with his care. Not that he sees it that way, of course.

I really liked the serious nature of Luke's mother's illness in this story. It is very different, and it adds a sense of realism many Regency romances don't have. It brings home the cruel nature of mental asylums, horrible places where people who needed help were what we now consider tortured. This aspect added a serious note I found commendable.

As Luke and Hope's nightly chats on the balcony continue, they only slowly realise they're falling in love. Hope's character appeals to Luke, and he wants to help her with getting her book published, but her independent streak means there's trouble brewing.

The main characters are alive with their worries, fears and their attitude towards others that springs from treatment received in their past. I really enjoyed seeing how their friendship turned into love, and the other points of conflict – such as Luke's scheming sister-in-law who cherishes her role and home way too much (though perhaps quite befitting of the times) – simply add to a very interesting storyline.

The Marquess Next Door is one of my favourite reads of the year. A moving story with an unusual plot, I found it utterly gripping. I particularly appreciated the depth Luke's mother's illness adds to the story, a reminder of how unfortunates were treated by those who had the power.

And I thoroughly enjoyed Hope and Luke's slow courtship. They are two very likeable characters, and I was sad to say goodbye to them. But I'm already looking forward to what Ms Heath has in store for Charity, the third Brookes sister. Can't wait. 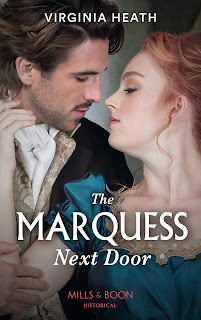 Temptation on her doorstep!

To avoid an unwanted suitor at a ball, Hope Brookes asks another gentleman to rescue her. He obliges – with a surprisingly passionate kiss!

Revealed as her sinfully handsome new neighbour, Lucius, Marquess of Thundersley, they forge a friendship over their balconies.

It’s refreshing that Lucius is more interested in her writer dreams than her looks, so why can’t she stop thinking about that kiss?

When Virginia Heath was a little girl it took her ages to fall asleep, so she made up stories in her head to help pass the time while she was staring at the ceiling. As she got older, the stories became more complicated, sometimes taking weeks to get to the happy ending. Then one day, she decided to embrace the insomnia and start writing them down.

Despite that, it still takes her forever to fall asleep.