Review: For Lord and Land by Matthew Harffy

I'm thrilled to share my review of For Lord and Land, Matthew Harffy's latest adventure featuring his Bernician no-nonsense hero, Beobrand. My thanks goes to Aries Fiction for a copy.

This time, it's not only our hero who has his own adventures... 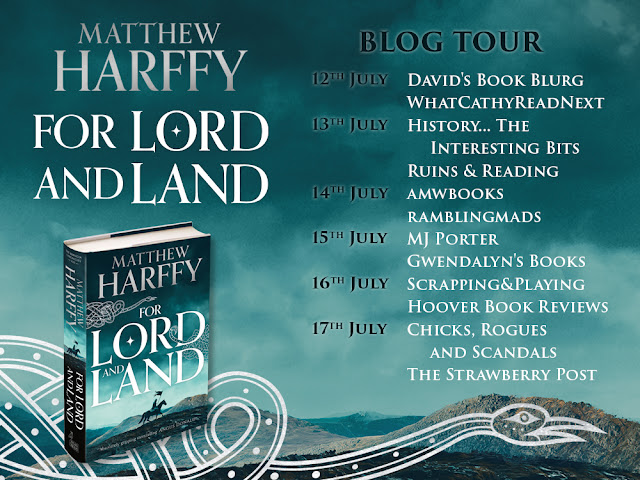 For Lord and Land

We return to 651 A.D., to the uncertain times when England was divided into small kingdoms, with each king vying for more power than was healthy.

For Lord and Land is the second of Beobrand's adventures I've read, and I was soon pulled into the plot. Our trusted warrior and several of his infamous Black Shields are on a ship, southbound, but little does he know that his skills will be in demand pretty much straight on arrival, when they found King Anna of the Angels in the middle of a fight with a strong group of Deirans. Initially, Beobrand is reluctant to join the melée that already looks lost to Anna, much to everyone's surprise. But a cunning plan changes his mind.

Soon after, he is on his way back to Bebbanburgh, to the court of King Oswiu, with an injured and exiled King Anna. Oswiu is unimpressed, as he had other plans for his prize warrior.

On his return, Beobrand hears about Cynan having absconded to the west with someone none of them ever wanted to see again, at least alive! But first, Beobrand has to follow his king's demand, and leaves to face the Deirans under their king, Oswine. There, he comes across his son again, who is still acting like a stranger.

And Cynan has an intriguing quest on his hands, one that makes him consider his own life. But just as he comes to a conclusion, Beobrand has other plans for him...

For Lord and Land is a gripping adventure full of political intrigues of the times. Kings, often loosely related, covet each other's crowns, not caring how many men have to die for their personal gain – or loss. I enjoy reading about these intrigues as they add depth to Beobrand's personal story. He remains as restless as always, even though age is slowly creeping up on him. Battles still excite him, but more and more, he becomes a man who would rather solve matters through negotiation. But fate – and his king – conspire against him.

There is a developmental aspect to Beobrand's journey in For Lord and Land. At times, he questions his loyalties, knowing he had broken his word in the past (Wulfstan springs to mind), but ultimately he remains the reliable hearth warrior. Unperturbed and lethal.

I also liked Cynan's side-story here. His sense of justice sees him helping someone who should have been executed, and on arrival, he has his work cut out. I don't want to give away anything of this great sub-plot other than that Cynan's external conflict matches his internal conflict. When realisation finally hits home, a door is (temporarily?) closed, and he has to follow Beobrand's orders.

The character who reappeared is much changed than before. A saviour, a marriage, and a son have helped heal old wounds. But will that be enough?

For Lord and Land is a fast-paced, action-packed historical novel that provides the reader with very visual glimpses into those long-gone days. Harffy knows his history well, and his research and the historical terminology used are impeccable.

My only grip was early on, in the first couple of chapters, when the pace was too slow for me due to much back story that wasn't needed at that particular point. I wanted to stay with the ship, and his journey, rather than dwell too much on the past. But once all was said, the action flowed nicely, and we were back in battle mode.

For Lord and Land is a highly recommended read for readers of historical fiction. Set in the ancient Anglo-Saxon kingdoms, it is a riveting adventure that leaves the reader eagerly awaiting the next instalment.

And I have an inkling as to where that will take good old Beobrand... 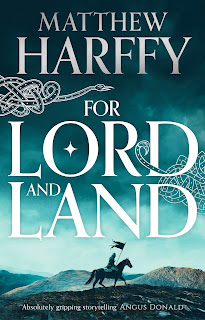 Greed and ambition threaten to tear the north apart.

War rages between the two kingdoms of Northumbria. Kin is pitted against kin and friend becomes foe as ambitious kings vie for supremacy.

When Beobrand travels south into East Angeln to rescue a friend, he unwittingly tilts the balance of power in the north, setting in motion events that will lead to a climactic confrontation between Oswiu of Bernicia and Oswine of Deira.

While the lord of Ubbanford is entangled in the clash of kings, his most trusted warrior, Cynan, finds himself on his own quest, called to the aid of someone he thought never to see again. Riding into the mountainous region of Rheged, Cynan faces implacable enemies who would do anything to further their own ends.

Forced to confront their pasts, and with death and betrayal at every turn, both Beobrand and Cynan have their loyalties tested to breaking point.

Who will survive the battle for a united Northumbria, and who will pay the ultimate price for lord and land?

Matthew Harffy grew up in Northumberland where the rugged terrain, ruined castles and rocky coastline had a huge impact on him. He now lives in Wiltshire, England, with his wife and their two daughters. 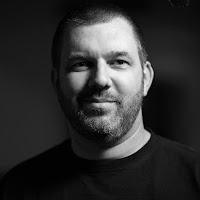