Promo: The Importance of Pawns by Keira Morgan

I have a special treat for you today. Follow me to sixteenth-century France, a time of great upheaval, with a fascinating guest post from Keira J. Morgan, author of The Importance of Pawns.

Keira is currently on blog tour with The Coffee Pot Book Club, so make sure to check out her other posts! Especially if you're into political intrigues in a sumptuous setting... 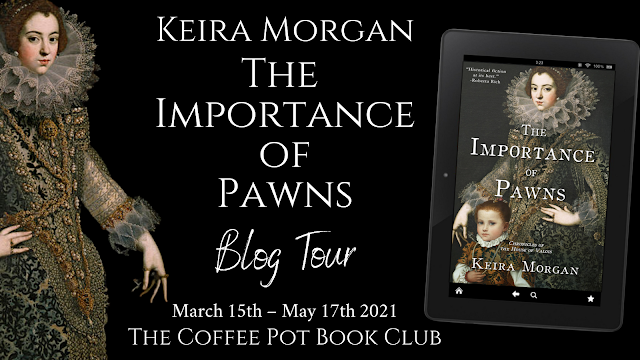 The Importance of Pawns

(Chronicles of the House of Valois)

The Importance of Pawns, by Keira Morgan

First, thank you for inviting me to your blog to talk about the historical background to my novel The Importance of Pawns.

You could not have asked about a topic closer to my heart. Historical fiction has been my favourite genre since I learned to read at five. At university, I studied history.

Four women are the central players in my novel’s cast of characters. One reason I studied women, and particularly French Renaissance women, was their sad neglect. The French excluded women from succession to the throne, so men found it easy to dismiss them from the historical record. Yet as I learned more about the French Renaissance, I realized that between 1483 and 1594 women influenced the politics or ruled the country either directly or indirectly — without recognition naturally.

Recently, because of the rising interest in women’s history, this research area is gaining prominence. More materials are available, but the quantity is still thin. I am profoundly grateful to every historian and student of French renaissance women’s literature now unearthing long overlooked treasures. I see myself as a detective investigating an ancient crime scene or an archeologist excavating long buried or overlooked artifacts because of the dearth of documentation and research material.

When I moved from pure history to historical fiction, I already had my cast of characters. Duchess Anne de Beaujeu, King Charles VIII’s sister; Queen Anne de France, Duchess of Brittany, his wife; Duke Louis d’Orléans who became the next king and married the widowed Queen Anne, who became Queen Anne a second time; Countess Louise d’Angoulême, niece of Duchess Anne de Beaujeu and mother of the next king, François I; Princess Claude, daughter of Queen Anne and daughter-in-law of Countess Louise... all these larger-than-life women fascinated me. They have been living in my imagination for more years than I want to count.

Three of these women are central characters in The Importance of Pawns. Two of them — Anne of Brittany and Louise d’Angoulême — played prominent public roles, so information exists about them in the public record. Not enormous amounts even now, but more than exists for the other two principal characters: Princess — later Queen — Claude and Baronne Michelle de Soubise because they lived more retired lives.

Since Baronne Michelle is a major character in my story, I spent a lot of time researching her life. One of my greatest satisfactions was to discover that the commonly accepted account of Baronne Michelle de Soubise’s dismissal from Princess Renée’s service was wrong. Historians continue to repeat that she was dismissed in 1515 without conducting original research. They simply footnote the original article. So, the misinformation spreads and spreads. My discovery of the error led me to an eureka moment, for it gave me the key to the ending for the novel. I wrote a post about it for my blog, explaining the mistake for anyone interested in the details.

The other reason I write French historical fiction is as simple and inexplicable as love. I love the French language and the country of France. One of my great pleasures was visiting the places my ladies lived and imagining myself walking where they had walked and seeing what they had seen. At the Château de Langeais, when faced with the incredible wax reproduction of Duchess Anne marrying King Charles VIII, I felt I was taking part in the ceremony.

At the Château de Blois I pictured the meeting of the Estates General when 4-year-old Princess Claude and 10-year-old Duke François betrothed. There was Queen Anne, seething inwardly, a smile pasted to her face as her husband King Louis forced her to agree to the union she had fought against her entire life. No wonder she hated him at that moment. I imagined her plotting a retreat to her duchy of Brittany behind her insincere smile. Countess Louise sat on the other side of the king. She was no happier than the queen, but she was better at disguising her chagrin. The members of the Estates General laughed and clapped and drank toasts to the happy couple and their parents. They were the most delighted people in the room — except perhaps King Louis. As I stood in that great chamber with its stunning blue ceiling decorated with golden Fleur de Lys, (2) their shades whispered and sighed around me. 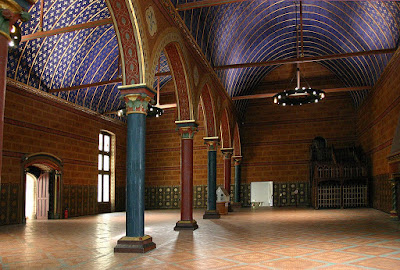 After gathering all that delicious research, it was hard to let it go. Several drafts and ruthless chopping were necessary to rid my baby of its information dumps. But it was essential surgery. Although I studied history, I do NOT want my readers to feel The Importance of Pawns is a history lesson.

When readers finish, I would rather they feel the ending was perfect for the story — that it was both surprising and inevitable. When Claude faces difficult and painful situations, I want my readers to feel the way she does because they have experienced problems like hers and have suffered too. When Louise behaves snobbishly, or underhandedly towards her victims, I want her behaviour to feel so real that my readers are as angry, betrayed and frightened as her targets. I want the setting — the sound of galloping horses, the weeping in the Queen’s death chamber in Blois, or the taste of baked pigeon at a feast — to be so real that it transports them to the French Renaissance court.

And I hope the novel leaves them wanting to know more. When I finished, it left me with questions. What caused the deep enmity between Anne and Louise? If Louise’s son was next in line to the throne, why was her husband so poor? My next novel will answer some of those questions.

I am eager to learn the questions my readers want answered after they finish The Importance of Pawns. I invite them to visit my website [https://kjmorgan-writer.com/] to ask! 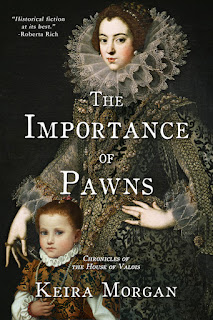 Based on historical events and characters in sixteenth-century France, this timeless tale pits envy, power and intrigue against loyalty and the strength of women’s friendships.

Although the French court dazzles on the surface, beneath its glitter, danger lurks for the three women trapped in its coils as power shifts from one regime to the next. The story begins as Queen Anne lies dying and King Louis’s health declines. Their two daughters, Claude and young Renée, heiresses to the rich duchy of Brittany, become pawns in the game of control.

Countess Louise d’Angoulême is named guardian to both girls. For years she has envied the dying Queen Anne, the girls’ mother. Because of her family’s dire financial problems, she schemes to marry wealthy Claude to her son. This unexpected guardianship presents a golden opportunity, but only if she can remove their protectress Baronne Michelle, who loves the princesses and safeguards their interests.

As political tensions rise, the futures of Princess Renée and Baronne hang in the balance, threatened by Countess Louise’s plots.

Will timid Claude untangle the treacherous intrigues Countess Louise is weaving? Will Baronne Michelle and Claude outflank the wily countess to protect young Princess Renée? And can Claude find the courage to defend those she loves?

Praise for The Importance of Pawns:

“Love, revenge, deceit, valour, struggle and bravery. These are the keystones of Keira Morgan’s fascinating new novel, The Importance of Pawns. Historical fiction at its best.”

Keira retired from training and management in the Canadian Public Service to follow a career as an author. She now writes from Mexico where she lives happily with a husband, two cats and two dogs. Her doctoral level studies in Renaissance history underlie her historical fiction. She writes about the turbulent sixteenth-century French Renaissance. Her stories tell of powerful women who challenged tradition to play crucial roles in French affairs. Find out more at KJ Morgan — Writer!

She also maintains a non-fiction website, All About French Renaissance Women, [https://www.keiramorgan.com] where she writes about the lives of Frenchwomen during the era. She plans to collect their biographies into a book. 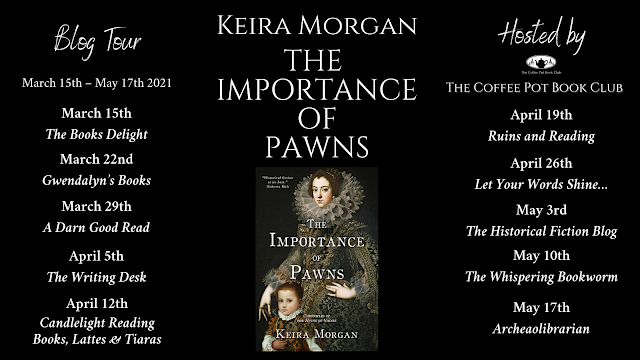