Promo: The Colour of Evil by Toni Mount

I'm delighted to bring you an enticing excerpt from The Colour of Evil by Toni Mount, a historical murder mystery set in 15th century London.

The Colour of Evil is currently on blog tour with The Coffee Pot Book Club, so make sure to visit the other sites for more intriguing excerpts! 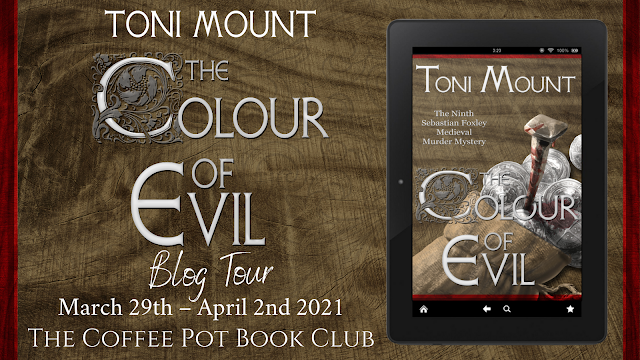 The Colour of Evil

The vintner, Clement Mallard, lived in a grand place further up Grace Church Street, opposite the Leadenhall. Guy Linton’s premises had impressed me but this establishment was close kin to Crosby Place, where the Duke of Gloucester resided when in London. I recalled that it had also been built for a wealthy merchant, the grocer John Crosby. Clement Mallard could likewise afford a similar fine house, with its grand gated entrance into a paved courtyard and marble steps leading up to the great hall beyond. It was as well that I be familiar with Crosby Place, else I may have felt intimidated by Mallard Court.

I followed Guy – apparently we were upon such terms now that the use of first-names was permitted – up the steps, into the hall. I remained somewhat behind him, posing as his humble assistant. Thus was I laden like a pack-horse, carrying the offending portrait and a good deal of artist’s paraphernalia besides my own scrip. I disliked this subterfuge more with each passing minute.

‘You’re late, Linton,’ Mallard growled by way of greeting. ‘And who’s this?’ The vintner waved his hand vaguely in my direction, frowning. ‘I don’t want anybody coming here, uninvited. You know that.’

‘Ignore him, Master Mallard. He’s only my assistant. I needed help, carrying my stuff, is all.’ Thus, Linton introduced me. ‘Set up the easel, brushes and pigments there, by the fireplace,’ he instructed me, ‘And then sit out of the way, behind my line of sight, and keep silent. Don’t disturb me at my work.’

I made no answer. The reply that sprang to mind was not of a suitably servile nature but I did as bidden. I sat just behind and to the left of Guy, such that I might view the sitter from the same angle, taking out my charcoal and cheap papers ready pinned to my drawing board in such wise as not to attract the vintner’s eye. I had commenced my first sketch afore Guy had even settled the half-painted portrait upon the easel and dipped his brush.

The subject had little to recommend it. A true likeness would not be one that any but the blind could possibly take pleasure in gazing at. I should not want it hung upon my wall. That expression would turn ale sour and set children wailing. In truth, the physical features were of common proportions – not as Guy had painted them – and naught out of the ordinary, topped by thinning grey hair. But the eyes held such malevolence as I had ne’er espied in any other. If the eyes be the windows of the soul, as we be told, then this one must surely be beyond saving, belonging to Satan already. I was hard pressed not to cross myself. Suspicious brows were drawn low over these twin pools of darkness, as though to keep their secrets hidden. Even as I drew them, I shivered. Creating their likeness chilled me.

The skin had an unhealthy, jaundiced hue – Guy had painted that aright; it was not wholly caused by light reflecting from the golden curtains – and lay upon the bones beneath like a creased bed sheet. Every line bore the mark of ill-humour. These were not the characterful wrinkles of old age but the deep-scoured imprints of malice and spite. It was hard to gauge this sitter’s age at all but the gnarled fingers, contorted by swollen joints, suggested three score years, or thereabouts, at least.

But, as Master Collop used to instruct: I drew what I saw; five minutes of worthwhile observation giving birth to a few lines of exactitude. In a short space, I had the sketches required of the sitter and tucked my board away in my scrip, out of sight, glad to turn my eyes to more pleasing views.

The parlour at Mallard Court was well appointed. A gilded ceiling looked to be well constructed and I noted the carving on the beams of what I first thought to be a skein of geese in flight. But no. Of course, they were ducks: mallards, a play upon the vintner’s name. The fireplace was surrounded by a carven mantle and here, too, images of ducks outnumbered all else. I had ne’er considered these birds to be evil creatures. My son loved to watch them swimming on the water of the Horse Pool and they gave me pleasure also, admiring the iridescent plumage of the drakes, their determined waddling gait upon land. Yet these ducks looked to thirst for blood. I turned away to gaze out the window. I was becoming over-fanciful, imagining such foolish things as ill-intentioned ducks.

When Guy breathed a heavy sigh and turned to me, holding out his brushes, indicating that I – being but his lowly assistant – should clean them, the vintner pushed out of his cushioned chair.

‘Show me the portrait,’ he demanded. ‘I have waited long enough to see your handiwork, Linton. I will see it – now!’

‘No, no, Master Mallard.’ Guy threw a cloth over the portrait, despite the likelihood that the last strokes of egg tempera were yet wet. ‘’Tis ill-luck to see it in its unfinished state.’

‘’Tis a well-known fact, I assure you. Isn’t that right?’ Guy looked at me, his desperation clear.

‘I have heard it said,’ was all I would offer in support.

‘Next time, it will be finished, master, then you can view it as you wish. I promise you.’

Master Mallard muttered to himself, glaring at Guy.

‘Next time, then, and woebetide you, Linton, if it’s not finished. I’ve wasted enough time on this damned porterate business. I have more important matters to attend to.’ With that, he stomped out of the parlour, leaving us to clear and tidy away the materials and equipment. We had not been offered so much as a cup of water and the chamber had grown stuffy and over-warm as the afternoon sun poured through the glazed windows. In truth, with the need for subterfuge ended, I stood back and watched Guy pack up his things. Every craftsman has his own way of it, I told my conscience; better if he does it himself. Indeed, he ‘tidied’ his things much in the manner of his workshop – that is to say, in careless wise, with no thought to ensuring his brush-ends would dry in goodly shape nor securing his pigment pots to preserve the precious powders. E’en so, I helped him carry his stuff back down Grace Church Street to his house where he had manners enough to offer me ale.

The Colour of Evil 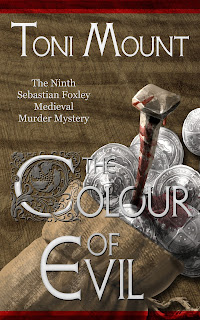 Every Londoner has money worries, and talented artist and some-time sleuth, Seb Foxley, is no exception.

When fellow craftsmen with debts to pay are found dead in the most horrid circumstances, fears escalate. Only Seb can solve the puzzles that baffle the authorities.

From counterfeit coins to deadly darkness in London's worst corners. From mysterious thefts to attacks of murderous intent, Seb finds himself embroiled at every turn. With a royal commission to fulfil and heartache to resolve, can our hero win through against the odds?

Share Seb Foxley’s latest adventures in the filthy streets of medieval London, join in the Midsummer festivities and meet his fellow citizens, both the respectable and the villainous.

Praise for Colour of Evil:

“Toni Mount is simply brilliant. If you love CJ Sansom’s Matthew Shardlake – and I do – you will love Toni’s Sebastian Foxley. From learning how a 15th century scrivener created illuminated manuscripts to venturing within the dank tunnels beneath the Tower of London, Toni is an artist who completely immerses the reader in another time and place and always leaves one eager for the next book.”

“Leave it to Seb to unravel another international spiderweb of intrigue, betrayal, murder, and deceit. Our flawed, loveable hero has done it again. And at the end of it all, his future is looking brighter than ever. I cannot wait to find out what happens to him next!”

“A beautifully crafted mystery that brings the dark, dangerous streets of medieval London to life. Toni Mount is a magician with words, weaving a captivating story in wonderful prose. The Colour of Evil is, to put it simply, a pleasure to read.”

Kathryn Warner, medieval historian and author of numerous books about the fourteenth century, including biographies of Edward II and Isabella of France:

“The ninth instalment of Toni Mount's popular Seb Foxley series is sure to delight Seb's many fans. Mount puts her deep knowledge of late medieval England to good use once again, and takes us on another exciting adventure, this time with Seb's older brother Jude, returned from Italy, in tow. Mount's detailed world-building, as always, brings fifteenth-century London to life.”

Is your book on Kindle Unlimited? Yes. 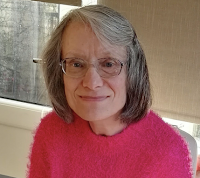 Toni Mount earned her Master’s Degree by completing original research into a unique 15th-
century medical manuscript. She is the author of several successful non-fiction books including the number one bestseller, Everyday Life in Medieval England, which reflects her detailed knowledge in the lives of ordinary people in the Middle Ages.

Toni’s enthusiastic understanding of the period allows her to create accurate, atmospheric settings and realistic characters for her Sebastian Foxley medieval murder mysteries.

Toni’s first career was as a scientist and this brings an extra dimension to her novels. It also led to her new biography of Sir Isaac Newton. She writes regularly for both The Richard III Society and The Tudor Society and is a major contributor of online courses to MedievalCourses.com.

As well as writing, Toni teaches history to adults, coordinates a creative writing group and is a member of the Crime Writers’ Association. 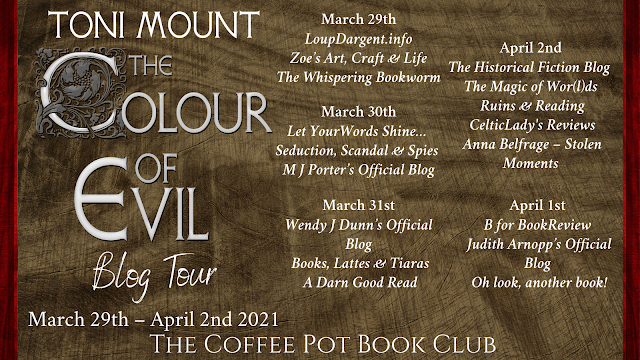