I'm delighted to share my review as part of a publication day push for The Viscount's Unconventional Lady by Virginia Heath, a thought-provoking Regency romance with two characters who don't fit the stereotypes. My thanks to Rachel's Random Resources for an ARC of the novel.

The Viscount's Unconventional Lady is a fast-paced romance about Faith, a young painter following in the footsteps of her highly esteemed portraitist father, and Piers, a Viscount living beneath the seemingly irremovable stain of a nasty divorce. The columnists have maligned him so much, he is persona non grata in the highest circles.

When Faith's father is commissioned by Piers's mother, the Countess of Eastwood, to paint the family on a large canvas for their ballroom, he takes Faith with him as she is the one painting the background, the imagined scenery. And her first encounter with Lord Beastly, as her mother calls Piers, doesn't go well when Faith – showing she is as susceptible to gossip as the rest of the Ton – challenges him. He retorts, and the scene is set. And it doesn't make for a pretty image.

Realising her rudeness (after all, her family have been victims of the gossip columns for years), she enters his study to apologise. There, she discovers a side to him that she did not expect, something that wasn't mentioned in the columns. He is kind and humorous with his 9-year-old niece, Isobel, who plays in his office and prompts him to apologise back!

From that point onwards, doubts begin to enter Faith's mind. Could someone who is kind to little girls be as callous as to desert his poor wife?

Piers has built a high wall around him, his circle of safety. Never again will he fall for a woman as vibrant, exotic and unusual as his former wife, Constança, whose behaviour triggered their divorce. But on the surface, Faith is just that – colourful, outgoing, vibrant. He tries to explain his physical reaction to her with mere lust, but as the weeks progress, he finds more and more differences between honest, open Faith and his ex.

Faith, on the other hand, has a dark secret of her own, one Piers discovers during an evening at the theatre were Faith's mother, an opera singer, revels in her performance in Cosi Fan Tutte. He whisks her away to regain her composure – and they reveal their deepest secrets to each other, ending with a passionate kiss. But though this is a turning point, neither is ready to accept their feelings for what they are, love.

I loved Faith's unusual character. Not a highborn lady, but one of three daughters of a painter and an opera singer, she would love to see her own paintings in exhibitions. But as a woman, even as good a painter as she is, her chances are like nil. The way Piers helps her gain her confidence independently, especially after her father falls of a ladder and is unable to continue the Eastwood portrait. He convinces his mother that Faith is the perfect painter to continue the job, something Faith relishes in.

Piers is not your typical ’tall, dark, handsome but brooding’ lord. His scheming ex has dented his confidence, and having to hide her awful behaviour by making himself out to be the bad guy gave him the perfect reason to withdraw from society. He is also not merely an armchair politician – something Faith accuses him of early on – but as it turns out, much to her surprise, his language skills are pivotal during the negotiations to end the wars with France. A diplomat, he's not used to rash actions, apart from his first marriage, so he approaches Faith with a sense of dread.

The way the author portrayed Faith and Piers is very realistic. She doesn't shy away from showing their fears, and their flaws, and she is not afraid to tackle the stigma attached to divorce in Regency times, or the debilitating effect of the gossip columns out to destroy people.

The way Faith and Piers find together in the end is well thought out. Neither loses their fears overnight, but it's a gradual, continuing issue in their lives. Their marriage isn't a wonder cure, but the path to regain lost confidence. I found it realistic and moving.

One minor point to make is when, following her father's accident, an atending German doctor of Piers’ acquantance explains her father's broken leg to her, in English, but using the enderarment ’liebling'. In German, Liebling is a noun, and whilst it was often used in Romantic poems and fiction of the times, it is exclusively for a loved one – a wife or a lover or someone admired. It's never in the sense an elderly gentleman would call a young woman not of his acquaintance ’dear’. It's too personal.

I also thought that her new success as a painter at the end, following her wedding, felt a bit rushed. The big painting – the theme that got them together in the first place – was pushed to the side. It should've been her distinctive triumph. But these are minor points only.

The Viscount's Unconventional Lady is an engaging, fast-paced story about two flawed characters who are not afraid to face their fears. We find a realistic and honest description of the characters, and of the setting – showing the dark side of Regency society with its rumours, gossip and prejudice that can so easily destroy people.

I thoroughly enjoyed this story, and I'm already looking forward to seeing what the author has in store for Faith's sisters, Hope and Charity. 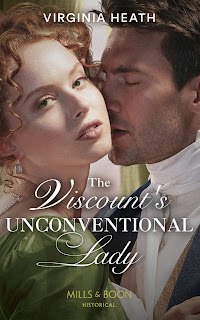 The notorious Viscount And the most gossiped-about lady…

After years as a diplomat in the Napoleonic wars, Lord Eastwood is reluctant to return to London society. His scandalous divorce has made him infamous, not to mention cantankerous!

To halt the rumour mill, he should marry a quiet noblewoman – instead it’s bold, vibrant artist, Faith Brookes, who’s caught his attention.

They are the least suitable match, so why is he like a moth to a flame…?

When Virginia Heath was a little girl it took her ages to fall asleep, so she made up stories in her head to help pass the time while she was staring at the ceiling. As she got older, the stories became more complicated, sometimes taking weeks to get to the happy ending.

Then one day, she decided to embrace the insomnia and start writing them down. Despite that, it still takes her forever to fall asleep.