Today, I'm delighted to share my review of The Good Wife by Eleanor Porter.

My thanks to Rachel's Random Resources for a review copy.

The Good Wife is the story of Martha, a young woman with a limp who is knowledgeable in herbs and healing. Hers is a precarious existence as the wife of a stable hand, Jacob. Whilst she wants to help people in her village, she is aware that being a healer could end up with her being accused for being a witch. Having been accused in the past, she instead lives a quiet life with her husband.

When Jacob has to travel north to Lancaster with his master, Lord Thomas, and a group of nobles, she patiently awaits his return. But weeks go by without a word, and Martha begins to help villagers with her potions. When Boult, the steward of their lord's manor, orders her to treat a putrid ulcer on his leg, he sets a dangerous path in motion. When he offers her a book of Greek mythology in exchange for a kiss, she agrees, as she has missed reading, but he makes it clear he wants her as his lover. When she realises she is pregnant by her husband, Boult spreads rumours about her.

When Lord Thomas returns without Martha's husband, Martha knows something is amiss. She is told that Jacob died in a dark lane in Lancaster, but details are contradictory. Was he with a woman? Was it a brawl? The behaviour did not sound like Jacob. With Boult threatening to evict her from her home if she didn't agree to an affair, Martha knows she has to travel north to find Jacob – dead or alive.

Her journey full of perils, she agrees to travel, disguised as a boy, with Edward Talbot, a scryer and forger. But the surprise that finally awaits Martha is not one she's expected.

The Good Wife is a rollicking adventure set in Elizabethan England, with all its dangers and superstitions. Martha's trials and tribulations before and especially during her journey make this a very vivid account. The author's research is impeccable, from descriptions of sweeping landscapes to filthy cityscapes, to the language the characters use, which is blunt and colourful at times. Their speech includes words now considered as serious swear words, but in the context they fit in perfectly. They didn't bother me.

Martha is a woman torn between being a well-read healer and a good, obedient wife. But during her journey she goes through so much that her views – her whole outlook on life – change beyond her imagination. This is great character development. It felt realistic. Her thoughts were often interspersed with memories of happier times with Jacob which, at times, slowed the pace. But at the end, the naïve girl had grown into a woman who was not afraid to seek her own destiny.

I enjoyed following Martha's journey. The adventurous plot pulled you along with her, and you had the real sense of travelling the beaten roads with her. The dangers she encounters were real, and the author did well not to skip over the darker elements of them. Martha suffered, and we suffer with her.

Apart from the slow pace at times, there were some issues with missing commas, especially in speech, but that was a minor issue.

The Good Wife is a gripping and engaging read, beautifully told, and highly recommended.

The Good Wife is a follow up to The Wheelwright's Daughter, which I have not read. It works well as a standalone novel, as you are introduced to Martha's past during the story, so you don't need to have read the first novel. 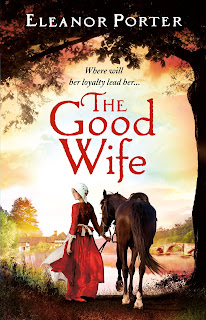 Where will her loyalty lead her?

Once accused of witchcraft Martha Spicer is now free from the shadow of the gallows and lives a safe and happy life with her husband, Jacob. But when Jacob heads north to accompany his master, he warns Martha to keep her healing gifts a secret, to keep herself safe, to be a good wife.

Martha loves Jacob but without him there to protect her, she soon comes under the suspicious eye of the wicked Steward Boult, who’s heard of her talent and forces her to attend to him. If she refuses, he promises to destroy the good life she has built for herself with Jacob.

Desperate and alone, Martha faces a terrible decision: stay and be beholden to Boult or journey north to find Jacob who is reported to have been killed.. The road ahead is filled with danger, but also the promise of a brighter future. And where her gifts once threatened to be her downfall, might they now be the very thing that sets Martha free...?

The brilliant follow-up to Eleanor Porter's first novel of love, betrayal, superstition and fear in Elizabethan England. A story of female courage, ingenuity and determination , this is perfect for fans of Tracy Chevalier.

Eleanor Porter has lectured at Universities in England and Hong Kong, and her poetry and short fiction has been published in magazines. The Wheelwright’s Daughter was her first novel.