I'm thrilled to share a review I wrote just over a year ago, but not yet posted to this blog, for historical fiction and Ocelot Press author, Jennifer C. Wilson's wonderful novel, The Raided Heart.

Jennifer has just had the cover re-done, and I must say it's beautiful, really evocative of the setting.

Set in 15th century Northumberland, in the turbulent Border region between England and Scotland, it's a tale of adventure, trust, and romance. 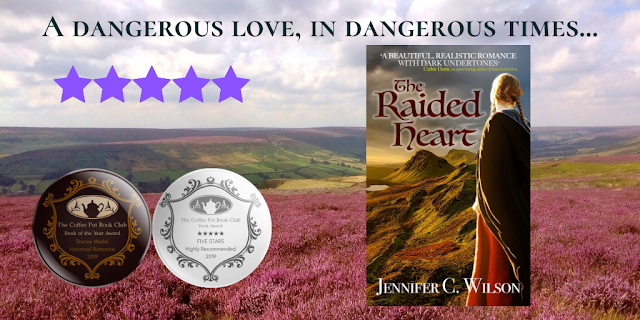 I must admit I know very little about the border between England and Scotland, and I feel I learnt much when I read this riveting story. Set in the 15th century, Ms Wilson really shows her in-depth knowledge of the era. The terminology suits the time and setting, and the reiver practices are well described.

We meet Meg Mathers early on as a headstrong, slightly spoilt young woman. When she is kicked by Will Hetherington's horse, she blames him, although the fault was hers, so he must support her as long as she is unable to walk. This provides ample time for the two of them to get to know each other. There is some subtle humour that shines through now and then, but all is set against the uncertain backdrop of the day – with nightly raids on other villages, on both sides of the border, regular and dangerous occurrences. These dangers make for a strong undercurrent that remains in place throughout the novel.

Despite Meg and Will falling in love, they know they cannot be together. Will appeared in their village to stay with his sister and her husband, and has nothing of value to offer her. So when her brothers arrange her marriage to the son of their new ally, a brutal but influential reiver called Alexander Gray, they are distraught but resigned to their reality. But when Gray's wife suddenly dies before the marriage, seemingly of an accident, Meg finds it hard to come to terms with her new fate...to wed scheming Gray himself.
The story carries a sense of tension throughout, and despite some light-hearted moments, Ms Wilson keeps readers in no doubt about the daily dangers people faced. There is plenty of conflict, external as well as internal, to occupy the main characters, and the fast pace leads to a gripping ending.
A beautiful, realistic romance with dark undertones, The Raided Heart is one of those books you find hard to put down. 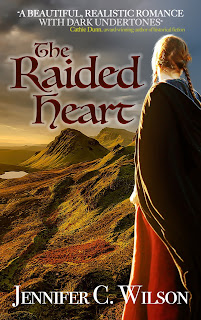 Ambitious reiver Will Hetherington wants to prove himself a competent man in the company of Robert Mathers, head of the village.

Headstrong Meg Mathers, Robert’s younger sister, wants to remain at her beloved home, caring for her family, the land and the village of Long Ridge where she’s grown up.

When an accident throws Meg and Will together, attraction builds, and both begin to realise they might just have met their match. But life on the 15th century border is never that simple, and Meg finds herself betrothed to the weakling son of tyrannical neighbour, Alexander Gray.

When tragedy strikes, can Meg and Will find their way back to each other, and can Will finally take his own personal revenge on Gray?

“…[Will] is a marvellous example of what a historical romance hero should be… The Raided Heart is a wonderfully tender romance set within a backdrop of hostility and questionable allegiances.” –Winner of the Bronze Prize for Historical Romance, in the Coffee Pot Book Club Book of the Year Award, 2019.

"A delicious mix of historical action and romance."

"Exciting, passionate and ultimately the ending keeps the spirit of true love alive." 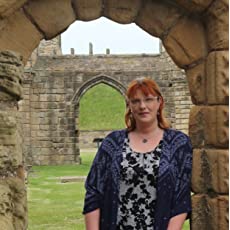 Jennifer C. Wilson stalks dead people (usually monarchs, mostly Mary Queen of Scots and Richard III). Inspired by childhood visits to as many castles and historical sites her parents could find, and losing herself in their stories (not to mention quite often the castles themselves!), at least now her daydreams make it onto the page.

After returning to the north-east of England for work, she joined a creative writing class, and has been filling notebooks ever since. Jennifer won North Tyneside Libraries’ Story Tyne short story competition in 2014, and in 2015, her debut novel, Kindred Spirits: Tower of London was published by Crooked Cat Books. The full series was re-released by Darkstroke in January 2020. She also publishes historical fiction novels with Ocelot Press.

Jennifer is a founder and host of the award-winning North Tyneside Writers’ Circle, and has been running writing workshops in North Tyneside since 2015. She lives in Whitley Bay, and is very proud of her two-inch view of the North Sea.