Today, I'm delighted to share my review for The Duke's Runaway Bride, a fast-paced adventure romance by Jenni Fletcher. This is not your ordinary Regency romance! As you will see, the bride has ideas most unsuited to duchesses. But that makes her so interesting...

My thanks goes to Rachel's Random Resources for an advance copy of the novel.

Orphaned heiress Beatrix left her new husband, the Duke of Howden, but – to her regret – only after their vows. Vows she knew were meaningless as theirs was an arranged marriage. Married for her fortune which he needed to rescue his failing estate, she has no funds for herself. So, unbeknownst to him, she settles in Bath, and works in a bakery and café, something she really enjoys. So she writes to her estranged husband asking for a divorce. It should be easily granted, with no consummation of marriage having taken place. He has the power to set her free, to allow her to lead a happy life she chose for herself after miserable years spent under her uncle's roof. But the response she gets – the arrival of Quinton on her doorstep with an offer of a six-week trial – is not at all what she expects.

Beatrix agrees, and she leaves Bath and her friends behind, but her arrival at the Howden family seat, her welcome is rather frosty. Quin's family have not forgiven her for running away, for causing a scandal. But slowly, she uncovers a dark secret beneath the haughty behaviour of her mother-in-law, and her brother-in-law's strange behaviour becomes clear. It also explains her husband's reluctance to agree to a divorce. Another scandal would tear the family apart. But as she grows to know him, she realises there is a kind, loving man beneath his abrupt exterior.

Beatrix is a fiercely independent character. She has suffered under her uncle's uncaring ’care’, forced into a marriage not of her choice, and she finally found a way of supporting herself independently. She is not prepared to give all of it up for marriage to a man she doesn't know.

Quin and his family are affected by scandal caused by his late father. Rumours abound, turning them into hermits, away from society. He is fully aware of his responsibilities, but reluctant to address the past with his mother.

Bea is a breath of fresh air to the family, but even resolving the old family issue, and the changes this brings to everyone, is not enough to make her give in. Only Quin's can do that. Their attraction to each other is growing slowly, portrayed in a realistic manner. Marriages of convenience were the norm, but at times they grew into mutual respect, and more. I found Ms Fletcher showed this in a realistic way. Bea is not Quin's usual type, and he begins to realise that there's more to attraction than a pretty face.

Quin is an interesting character, affected by family scandal. His learning curve in those six weeks is steep. Not only the attraction, but also his family's behaviour towards each other changes once Bea has uncovered the reason. He is strong, intelligent and surprisingly open for one whose bride has run off.

The plot could have gone awry, but it didn't. Against all odds, we discover a couple that grows together in the face of scandal, that finds common ground – and, quite unexpectedly for them – love.  Their courtship is done beautifully. Away from prying eyes of the ton, Bea and Quin had the time and leisure to develop their relationship.

My only gripe would be that I'd have liked to see Bea baking more often, even as a duchess. Much was made of her love for it in the beginning, but then we only have a few scenes where she enjoys it.

The Duke's Runaway Bride is less of a Regency romance about life in London as part of the ton, but rather a romantic adventure following two characters who life had dealt a tough blow, with an array of interesting secondary characters. A thoroughly enjoyable read. 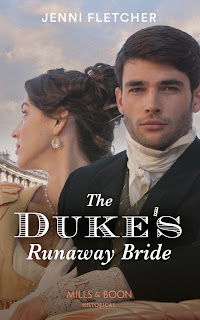 From shopkeeper… To Duke’s wife

When Beatrix, Duchess of Howden, writes to her estranged husband offering a divorce, she’s stunned when he arrives on her doorstep with a different proposition: a six-week marriage trial!

Quinton Roxbury seems cold and inscrutable, but Beatrix gradually realises his rough exterior hides a heavy burden. As their connection deepens, dare she trust him with her own scandalous past and risk the marriage she never knew she wanted? 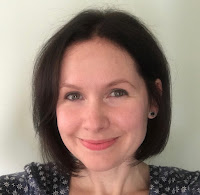 Jenni Fletcher was born in Scotland and now lives in Yorkshire where she writes historical romance novels ranging from the Roman to late Victorian eras. She studied English at Cambridge and Hull and has been nominated for 4 RoNA awards, winning for Short Romantic Fiction in 2020.

She teaches Creative Writing at a university in the north of England and her favourite hobbies are baking and, of course, reading.