Review: The Oath by A.M. Linden

I'm delighted to share my review for The Oath, a historical fiction novel by A.M. Linden, and the first in a new series, The Druid Chronicles.

The title is currently on blog tour with The Coffee Pot Book Club. Nip over to all the other hosts to discover more about this intriguing story! 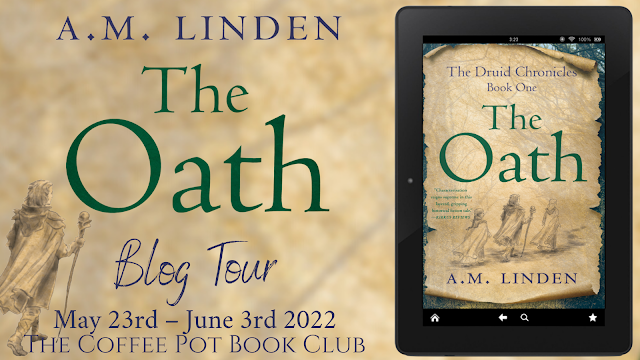 The Druid Chronicles, Book One

The Oath begins a little like a ’Once upon a time’ fairy tale, telling us about a great king and his young wife. When he is ambushed and killed, his wife dies in childbirth – and his nephew Gilberth is at hand to take over the reins. Convenient. Intrigue, much! Right from the start.
Young Caelym was sent by his High Priestess to find her long-lost sister, Annwr, who'd been taken by Saxon warriors fifteen years earlier. It takes him a long time to locate her, until he does so – with an arrow in his back. Hunted by Christians as a heathen, he is barely alive when he barges into her calm existence.
But his arrival triggers a series of events that none of them could have foreseen. Annwr had been nursemaid to the late King Theobold's only surviving daughter, Aleswina, who was put into the convent on Gilberth's orders. Headstrong and wilful, the young woman is everything a good nun should not be, and others are out to get her ousted. The women have hidden Annwr's true leanings – she is a Druidic healer, and not of the Christian faith, and she lives quietly in an idyllic cottage in the convent grounds.
Caelym's arrival sees Saxon warriors search the era, and now Annwr finds herself in danger. As his healing from his arrow wound progresses, the enemies close in. Aleswina hides him in the cave of a shrine, but Annwr is not so fortunate. As the Saxons search her home, and she kneels quietly clutching a cross, they destroy her belongings and kill her beloved animals.
I must admit that, as a reader of historical fiction, I'm used to violence against other humans, but the mindless killing of geese and a pregnant sow, however fictional, got to me. I can well visualise Annwr's feelings.
The old woman agrees to come with Caelym, as he was instructed, but Aleswina should remain behind. Then the girl overhears one of her uncle's henchmen speak with the Mother Superior. We suspect his previous wives were all done away with (cleverly portrayed in prayer for their souls) in a way that makes Henry VIII look benign, so Aleswina is not keen on it. She joins Caelym and Annwr in their flight, as she does not wish to wed her brutal uncle.
But their journey is perilous, nearly leaving them drowning, and always in danger of attacks. Caelym and Aleswina squabble throughout, and poor Annwr has to keep the peace. I'll be interested to see how the journey of those two develops over the series,
The style is very much in the storytelling realm; highly visual, well fleshed out. Caelym is an arrogant little sod (pardon the language) and Annwr likes to put him in his place. The older woman is wise. She's seen it all. Now she's about to learn she may have to give up the daughter left behind all over again.
And Aleswina is a spoilt young woman. Protected by her closeness to Gilberth, she was allowed freedoms other nuns were not. But now that she's on the run, fearing for her life, she is in shock. Her portrayal is realistic, in that she doesn't overnight turn into a tough maiden. She's fragile, yet determined.
The Oath is a vivid, beautifully told tale of necessity and forged friendships. Three very different characters were thrown together, and slowly a bond develops. But still, each stays true to themselves, creating wonderful conflict.
I'm looking forward to the next title in the series. Highly recommended.
~~~
Blurb: 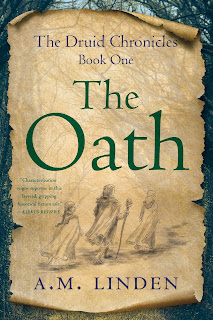 When the last of members of a secretive Druid cult are forced to abandon their hidden sanctuary, they send the youngest of their remaining priests in search of Annwr, their chief priestess’s sister, who was abducted by a Saxon war band fifteen years ago. With only a rudimentary grasp of English and the ambiguous guidance of an oracle’s prophecy, Caelym manages to find Annwr living in a hut on the grounds of a Christian convent.
Annwr has spent her years of captivity caring for the timid Aleswina, an orphaned Saxon princess who was consigned to the cloistered convent by her cousin, King Gilberth, after he assumed her father’s throne. Just as Caelym and Annwr are about leave together, Aleswina learns that Gilberth, a tyrant known for his cruelty and vicious temper, means to take her out of the convent and marry her. Terrified, she flees with the two Druids—beginning a heart-pounding adventure that unfolds in ways none of them could have anticipated.
Praise:
“Linden's well-researched tale eloquently brings to life a lesser-known period of transition in Britain. . . . The author has created a strong foundation for her series with well-developed char-acters whom readers can embrace. . . . [a] layered, gripping historical fiction.”
—Kirkus Reviews
“The story rolls along at a lively pace, rich with details of the times and a wide cast of charac-ters. [The] plotting, shifting points of view of the three engaging protagonists, and evocative writing style make The Oath a pleasure to read. Highly recommended.”
—Historical Novel Review
“Linden uses a fairy tale-like style almost as though this story has been passed down orally over the centuries.”
—Booklist Review
Trigger Warnings:
Sexual assault, child abuse
Buy Links:
Amazon UK: https://www.amazon.co.uk/Oath-Druid-Chronicles-Book-One-ebook/dp/B08F2JGG56
Amazon US: https://www.amazon.com/Oath-Druid-Chronicles-Book-One/dp/1647421144
Amazon CA: https://www.amazon.ca/Oath-Druid-Chronicles-Book-One-ebook/dp/B08F2JGG56
Amazon AU: https://www.amazon.com.au/Oath-Druid-Chronicles-Book-One-ebook/dp/B08F2JGG56
Barnes and Noble: https://www.barnesandnoble.com/w/the-oath-am-linden/1137420415
Waterstones: https://www.waterstones.com/book/the-oath/a-m-linden/9781647421144
Kobo: https://www.kobo.com/us/en/search?query=the+oath+druid+chronicles+book+1
Apple Books: https://books.apple.com/us/book/the-oath/id1525843259
~~~
About the Author:
A. M. Linden
Ann Margaret Linden was born in Seattle, Washington, but grew up on the east coast of the United States before returning to the Pacific Northwest as a young adult. She has undergraduate degrees in anthropology and in nursing and a master’s degree as a nurse practitioner.
After working in a variety of acute care and community health settings, she took a position in a pro-gram for children with special health care needs where her responsibilities included writing clinical reports, parent educational materials, provider newsletters, grant submissions and other program related materials.
The Druid Chronicles began as a somewhat whimsical decision to write something for fun and ended up becoming a lengthy journey that involved Linden taking adult education creative writing courses, researching early British history, and traveling to England, Scotland, and Wales.
Retired from nursing, she lives with her husband and their cat and dog in the northwest corner of Washington State.
Where to find Ann Margaret:
Website: https://druidchronicles788ad.com/index.html
Amazon Author Page: https://www.amazon.com/kindle-dbs/entity/author/B08YTL5XT5
Goodreads: https://www.goodreads.com/book/show/54810317-the-oath 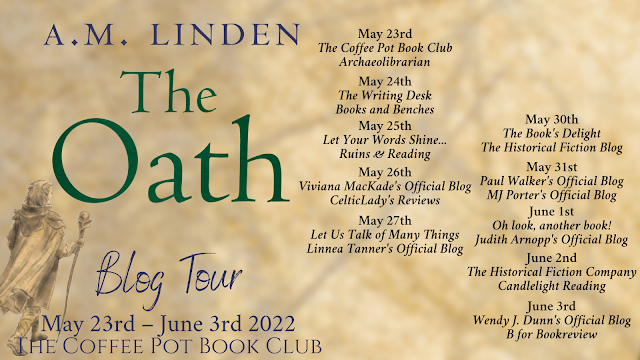