Today, I'm thrilled to share my review of Son of Mercia, an early medieval adventure by MJ Porter.

My thanks to Rachel's Random Resources for a copy. Make sure to check out all the other fabulous stops on this blog tour.

The Eagle of Mercia Chronicles, Book 1

The author takes us to 9th century Mercia, a once powerful Anglo-Saxon kingdom. But due to personal ambitions of a line of kings, she finds herself at the mercy of her neighbours: the scheming East Angles to the east, and emerging Wessex to the south, chomping at the bit, ready to absorb this ancient kingdom in its dream to unite the Anglo-Saxon kingdoms.

As Mercia's ineffective kings try to defend their positions, we stay with young Icel, a boy who is keen to learn the craft of healing. Taught by the crone, Winflaed, he assist her whenever injured warriors or sick locals need them. We learn Icel's mother died at his birth, and his father is unknown – an intriguing slant to his personal story.

But when the current king, Wiglaf, flees in the face of a Wessex attack, and the enemy approaches Tamworth, Icel's uncle, Cenfrith, takes him and his friend, Edwin, on a perilous journey fraught with danger and tension.

The setting feels authentic. The author has studied the era well. We get a real sense of it in the small details, down to clothing, weaponry, household goods, and healing herbs. This all helps us travel back in time to experience live in early 9th century Mercia.

The pace is slow at times, especially early on, when we witness a number of kings vying for position, only to find themselves killed or fleeing. It picks up halfway through the story, though, as tensions escalate and Icel is forced to face his fate.

Son of Mercia is a new series, and this first book sets the scene nicely, introducing us to the main characters and their lives. Brave Cenfrith, who, despite personal misgivings against the kings stays true to Mercia; young Edwin, who wants nothing more than become a great warrior, and Icel, who finds his life turned upside down.

Son of Mercia is an enjoyable adventure set against the Kingdom of Mercia's desperate fight to maintain her independence through the eyes of an unusual and interesting main character. I'm looking forward to reading the next in the series. 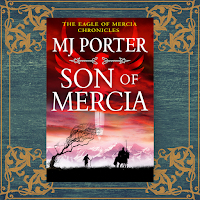 The once-mighty kingdom of Mercia is in perilous danger.

Their King, Beornwulf lies dead and years of bitter in-fighting between the nobles, and cross border wars have left Mercia exposed to her enemies.

King Ecgberht of Wessex senses now is the time for his warriors to strike and exact his long-awaited bloody revenge on Mercia.

King Wiglaf, has claimed his right to rule Mercia, but can he unite a disparate Kingdom against the might of Wessex who are braying for blood and land?

Can King Wiglaf keep the dragons at bay or is Mercia doomed to disappear beneath the wings of the Wessex wyvern?

Can anyone save Mercia from destruction?

MJ Porter is the author of many historical novels set predominantly in Seventh to Eleventh-Century England, and in Viking Age Denmark.

Raised in the shadow of a building that was believed to house the bones of long-dead Kings of Mercia meant that the author's writing destiny was set. 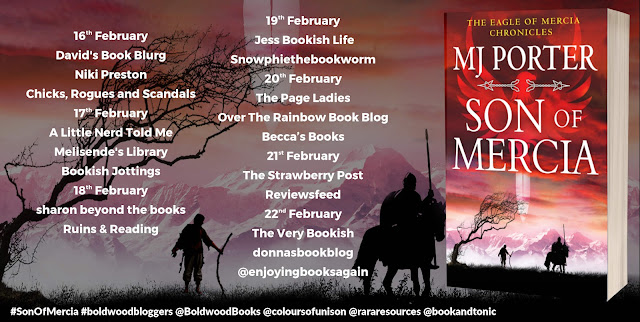