Today, I'm delighted to share my review for The Dragon Tree, a wonderful timeslip novel by Julia Ibbotson.

My thanks to Rachel's Random Resources for a copy. Make sure to check out all the other fabulous posts on this tour!

I was pleased to see the whole Dr DuLac series on tour with Rachel's Random Resources. Having previously read A Shape on the Air, I was looking forward to reading the next novel in the series, The Dragon Tree. And it was worth the wait!

A Shape on the Air introduced us to Dr Vivienne ’Viv' DuLac, a historian with a focus on medieval England. We discovered her link to the past, through her late mother, and a bloodline that dates back to the Lady of the Lake.

The Dragon Tree begins with a tragic loss that knocks Viv sideways. Falling into deep depression, she struggles to deal with the loss of her unborn daughter, Ana. Her husband Rory, meanwhile, throws himself into his work. 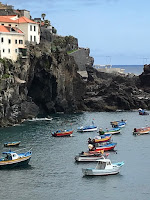 When Rory is offered a temporary assignment to take over a small church on the Portuguese island of Madeira, off the African west coast, he sees it as a chance to move forward. Reluctantly, Viv agrees. But once in Funchal, Rory shuts himself away, busy discovering what went wrong at the parish.

Viv, meanwhile, begins to have the same visions she had previously, only now it is a young woman called Ana who calls out to her. As Viv sets out to uncover Ana's story, unusual happenings make her wonder if she and Rory are safe.

When she discovers that her trusted ammonite is linked to Ana, together with an other artefact with both Greek and Arabic inscriptions, local to Madeira, she begins to wonder if history of the island's discovery needs to be rewritten. Then another woman of the past reaches out to her, and she realises that she's not the only one who can reach across time...

The Dragon Tree is a wonderful novel of tragic loss, of discovery, and new beginnings. As the past unravels in front of Viv's eyes, we are taken back to early settlements on the island. Ms Ibbotson's plot makes me want to read up more about that incredible place. 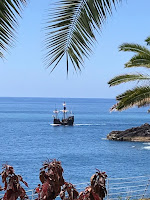 The description of the island is vivid, and the author brings the dramatic landscape and beautiful architecture to life. The pace throughout matches Viv's mood. As the tension grows, we see her becoming more emotional, and it's a credit to the author that she made Viv not a hysterical mess, but a woman dealing with a traumatic loss.

All ends are tied up neatly in relation to the tile (in the Author's Note at the end of the novel – make sure to read it!), and the fictional plot concludes dramatically.  The ending fits the situation and the three women's fates that are entwined in the story.

The Dragon Tree is a heartwarming novel that you can't put down. I read it in two sittings, so engrossed was I in the adventures of Viv, Ana, and Anja-Filipa.

Readers of timeslip and dual-timeline novels will love this suspenseful adventure.

Oh, and now I have to buy the third novel in the trilogy, The Rune Stone. I'm hooked! 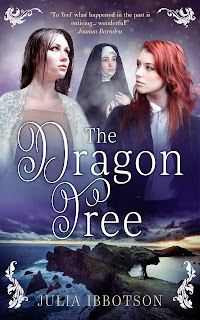 Echoes of the past resonate through time and disturb medievalist Dr DuLac as she struggles with misfortune in the present.

She and Rev Rory have escaped to the island of Madeira on a secondment from their posts, yet they are not to find peace – until they can solve the mystery of the shard of azulejo and the ancient ammonite.

Viv’s search brings her into contact with two troubled women: a noblewoman shipwrecked on the island in the 14th century and a rebellious nun at the island convent in the 16th century. As Viv reaches out across the centuries, their lives become intertwined, and she must uncover the secrets of the ominous Dragon Tree in order to locate lost artefacts that can shape the future.

Julia Ibbotson is fascinated by the medieval world and the concept of time. She sees her author brand as a historical fiction writer of romantic mysteries that are evocative of time and place, well-researched and uplifting page-turners. Her current series focuses on early medieval time-slip/dual-time mysteries. 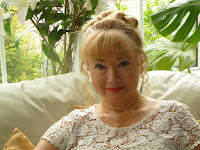 Julia read English at Keele University, England, specialising in medieval language/ literature/ history, and has a PhD in socio-linguistics. After a turbulent time in Ghana, West Africa, she became a school teacher, then a university academic and researcher. Her break as an author came soon after she joined the RNA’s New Writers’ Scheme in 2015, with a three-book deal from Lume Books (Endeavour) for a trilogy (Drumbeats) set in Ghana in the 1960s.

She has published five other books, including A Shape on the Air, an Anglo-Saxon timeslip mystery, and its two sequels The Dragon Tree and The Rune Stone. Her work in progress is the first of a new series of Anglo-Saxon mysteries (Daughter of Mercia) where echoes of the past resonate across the centuries.

Her books will appeal to fans of Barbara Erskine, Pamela Hartshorne, Susanna Kearsley, and Christina Courtenay. Her readers say: ‘Julia’s books captured my imagination’, ‘beautiful story-telling’, ‘evocative and well-paced storylines’, ‘brilliant and fascinating’ and ‘I just couldn’t put it down’. 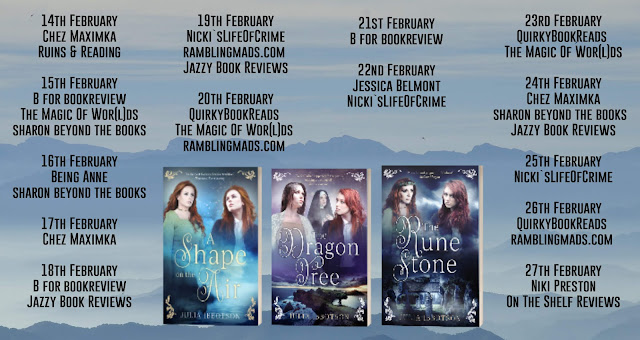