Review: When Only Pride Remains by Natalie Kleinman

I'm delighted to share my review of When Only Pride Remains, an intriguing Regency romance by Natalie Kleinman.

My thanks goes to Rachel's Random Resources and the author for a Kindle copy.

Prudence Fairham is content at her home, Fairham Manor, when her father returns from the Continental wars. But not all is as it seems, as she is soon to find out.

Major Fairham is partial to gambling. So when, one night, in the company of several of his former soldiers, they decide to play cards, Fairham drunkenly gambles away the manor – to young Captain Jack Staveley, who Prudence had hitherto considered a good friend. Jack is uncomfortable with the win, but doesn't back out.

When Fairham takes his own life, Jack offers the manor back to Prudence as it is her inheritance, but, with only her pride left, she haughtily declines and tells him he should have stopped her father.

Her aunt in Bath takes her in, and she settles into life in the bustling town. But with no prospects, her future looks bleak. But whilst there, she discovers a relative she didn't know she had, and her spirits return.

Meanwhile, Jack has plans for Fairham Manor. He wants to turn it into a place for injured soldiers to recuperate.

Eventually, Prudence returns to live nearby and their paths cross again. But will her pride stop her again from a happy future?

When Only Pride Remains is a gentle literary Regency romance following in the footsteps of Heyer and Austen. The narrative is omniscient, in line with the theme, and the plot intriguing. Jack's work on the manor is an unusual aspect, and one I thought very clever.

Prudence is a proud young woman, but not always likeable. Jack, on the other hand, doesn't deserve the cold shoulder she keeps giving him, but he persists. I really liked Jack. He's honest, flawed, but with a good heart. A true hero.

The author has done her research very well, and the descriptions of the times are detailed and accurate. In particular, I thought the way Ms Kleinman deals with the after-effects of war, the wounded soldiers and those bearing mental scars, was heart-breaking in its realism.

Sadly, I found little attraction between Prudence and Jack. Her innermost motivations escaped me, and I found her behaviour bordering on silly at times. It was a shield, of course, but I thought it a little too much. Prudence had several occasions to make her peace with Jack, yet he kept his patience.

The pace was slow in places, but the detailed, vivid description of Regency life made up for it. Ms Kleinman had the mannerisms of her characters spot on, well fitting in with the times. Her research is impeccable.

When Only Pride Remains is an intriguing treat for fans of literary storytelling in the tradition of Heyer and Austen.

Can two estranged friends find their way back to each other…? 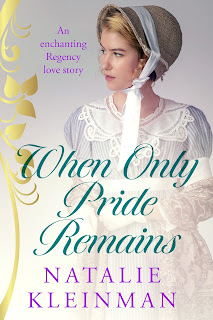 When her father —Major Angus Fairham — returns home from the Napoleonic wars, Prudence is excited to welcome him home to Fairham Manor.

However, tragedy strikes when Angus loses his estate to his close friend and comrade — young Captain Jack Staveley — in a drunken game of cards. Unable to face his loss, Angus takes his own life.

Distraught, Jack tries to restore Fairham Manor to Prudence, but she is too proud to accept his offer.

Overcome with grief and anger, she retreats to her aunt’s house in Bath and distances herself from her once close friendship with Jack.

But as the initial shock of her sorrow begins to dull, Prudence is soon missing the support of her most trusted confidant.

And when they once more find themselves in each other’s orbit, she must decide whether she can put aside her pride and open her heart…

WHEN ONLY PRIDE REMAINS is a historical romantic tale set in Regency England, with a feisty heroine and a moving love story at its heart.

Natalie’s passion for reading became a compulsion to write when she attended a ten-week course in creative writing some sixteen or so years ago. She takes delight in creating short stories of which more than forty have been published, but it was her lifelong love of Regency romance that led her to turn from contemporary romantic fiction to try her hand at her favourite genre. Raised on a diet of Jane Austen and Georgette Heyer, she is never happier than when immersed in an age of etiquette and manners, fashion and intrigue, all combined into a romping good tale. 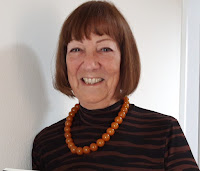 She lives on the London/Kent border, close to the capital’s plethora of museums and galleries which she uses for research as well as pleasure. A perfect day though is when she heads out of town to enjoy lunch by a pub on the river, any river, in company with her husband and friends.