Cryssa is currently on blog tour with The Coffee Pot Book Club. Make sure to check out the other fascinating posts! 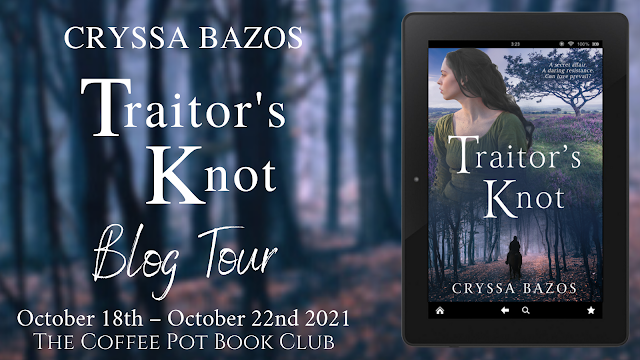 Royalist officer James Hart refuses to accept the tyranny of the new government after the exe-cution of King Charles I, and to raise funds for the restoration of the king’s son, he takes to the road as a highwayman.

Elizabeth Seton has long been shunned for being a traitor’s daughter. In the midst of the new order, she risks her life by sheltering fugitives from Parliament in a garrison town. But her attempts to rebuild her life are threatened, first by her own sense of injustice, then by falling in love with an outlaw.

The lovers’ loyalty is tested through war, defeat and separation. James must fight his way back to the woman he loves, while Elizabeth will do anything to save him, even if it means sacrific-ing herself.

James raced along the highway under a dark moon, crouched over Sovereign’s bare back. The wind ripped through his hair, and his cloak snapped behind him. Barely touching the ground, the horse galloped in a fluid motion, muscles bunching then exploding as he devoured the road. A wildness had seized him, and he unleashed it on the strip of highway beneath Sovereign’s pounding hooves. 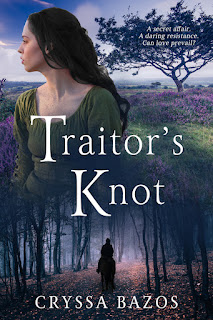 Outcast. Twice cursed. Hammond’s slurs pounded in his head. Elizabeth had heard it all.

James kept at this speed until Warwick Castle melted away into the horizon, a dark blur against a midnight sky. Blood coursed through his veins, and a thin sheen of sweat beaded his brow. He reined in Sovereign, slowing the horse to a brisk trot. They turned off the main road and struck for the river road.

Without a destination in mind, James set his course by the stars and kept the flowing river on his right. Though they had travelled down this path countless times, he kept a sharp eye on the road and a tight hand on the reins. A low overhang of branches snatched at his cloak, but he brushed past them. Underfoot, thick mulch muffled Sovereign’s hooves. They continued along the trail, and the farther they descended into the woods, the richer the scent of resin that filled the warm air.

The woods were alive under a dark moon. A small creature scurried across their path, and James checked Sovereign. Pausing, he heard the frantic clicking of nails scrambling up the bole of a tree and the enraged shriek of an owl missing its catch. James was in sympathy for the offended bird. Pressing the horse’s flanks, he urged Sovereign on his way.

When they reached the edge of the woods, James drew to a halt, reluctant to move forward yet unwilling to turn back. A wide swath of meadowland stretched before him, its grasses rippling in the night breeze. He recognised this pasture and knew where it led. If he were to cross the meadow, he would test the fine edge between recklessness and daring. If he were to proceed, there could be no retreat. A prudent man would return to Warwick and deal with his troubles another day.

James struggled against the raging conflict. A hard knot lodged in his chest. He could think of a million reasons to withdraw but only one to press forward. Finally, drawing a deep breath, he pressed his knees against Sovereign’s flanks and urged the horse onward.

He found Ellendale shuttered and dark and as daunting as a thirty-foot wall.

Madness carried him here this night—what was he hoping for? Reassurance that she didn’t think less of him for what she heard, that against all odds she cared?

He rode to the guest wing, wondering which window was hers. One of the casements was slightly ajar. He couldn’t imagine Isabel or Jennet risking a chill—it had to be hers. He dismounted and tethered Sovereign to a birch tree.

James stared at her window with the intensity of one warring with his demons. He needed her, this night more than ever.

He scooped up a handful of pebbles and rolled the stones in his palm while he gauged the distance to the window. He selected one, took aim and threw. The pebble tapped the centre of the glass and bounced against the sill before dropping to the ground.

A light flickered, and a wavering shadow took shape in the candlelight. Then he saw her at the casement. Elizabeth leaned out, dark hair tumbling in heavy waves past her shoulders. James watched her in silence, his heart open and raw. Would she turn away?

Their eyes met. She didn’t raise her hand or call out, only stood there. In the next instant, she disappeared from the window, and the light was snuffed out.

Right, then. He had his answer.

James turned his back on the manor and returned to Sovereign. It’s better this way, he thought as he tightened the horse’s girth and prepared to leave.

A sound like the scatter of leaves made him pause. He whirled around to find Elizabeth running to him. When she reached the birch grove, she stopped, breathless. Her expression was questioning; her lips parted, but she didn’t speak.

Some things were beyond words.

James held out his hand, and she stepped into his embrace.

~~~
About the Author:
Cryssa Bazos
Cryssa Bazos is an award-winning historical fiction author and a seventeenth century enthusiast. Her debut novel, Traitor's Knot is the Medalist winner of the 2017 New Apple Award for Historical Fiction, a finalist for the 2018 EPIC eBook Awards for Historical Romance.
Her second novel, Severed Knot, is a B.R.A.G Medallion Honoree and a finalist for the 2019 Chaucer Award. A forthcoming third book in the standalone series, Rebel's Knot, will be released November 2021.
Connect with Cryssa:
Website: https://cryssabazos.com
Twitter:  https://twitter.com/CryssaBazos
Facebook: https://www.facebook.com/cbazos/
Instagram: https://www.instagram.com/cryssabazos/
Book Bub: https://www.bookbub.com/profile/cryssa-bazos?list=about
Amazon Author Page: https://www.amazon.com/-/e/B072871QB3
Goodreads: https://www.goodreads.com/book/show/35489304-traitor-s-knot 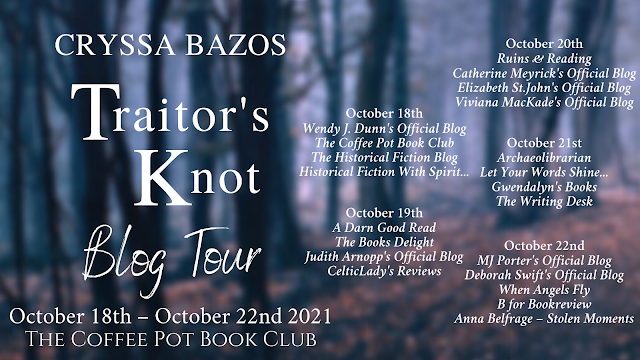