Today, I'm thrilled to share an enticing excerpt of a historical novel set in ancient Ireland: After Gáirech by Micheál Cladáin. It certainly caught my attention!

Micheál is currently on blog tour with The Coffee Pot Book Club, so make sure to check out the other stops! 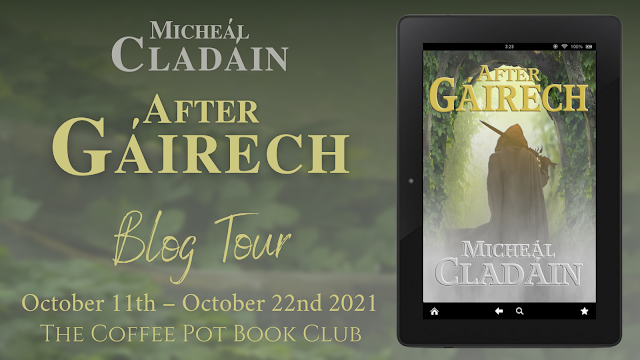 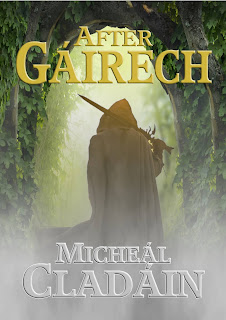 The battle of Gáirech is over; the armies of Connachta, Lagin, and Mumu are destroyed! Survivors are ravaging The Five Kingdoms of Ireland!

While working to resolve the Kingdoms’ issues and bring peace, Cathbadh is murdered, dying in his son Genonn’s arms. Genonn vows to avenge the death of his father.

For his revenge to work, he needs Conall Cernach and the Red Branch warriors of Ulster. But Conall is gone, searching for the head of Cú Chulainn. Genonn sets out to find him, aided by the beautiful Fedelm, the capricious Lee Fliath and the stalwart Bradán.

Nechtan listened to the mumbling of the snaking line of warriors. They were riding through the foothills of the Wicklow Mountains, fidgeting in their saddles and moaning in whispers, vainly trying to keep their pain to themselves. Thirty warriors and only a handful could say they were free of wounds. The cattle raid had promised riches beyond belief and then delivered nothing but pain and hunger and for some, death.

Sighing, Nechtan peered up through the canopy. The sky was taking on the darker blue of one soon to be abandoned by the sun. He was searching for a crow, any crow, so long as it flew in the same direction as his warband. His brows creased when the skies appeared empty. No crows. No birds of any kind.

Now ain’t that a shite. Where’s the crows when you need them?

And rightly so. A captain was only as good as the silver, meat, and mead he provided. Steering them up the Cooley Peninsula to steal Mac Fiachna’s famous Brown Bull proved to be a mistake. And it wasn’t even good eating. Tough as old saddle leather. Why the Cailleach decided to roast the animal was anyone’s guess. Roast it and then spread the rumour the two bulls fought it out in an epic battle, even more so. Still, who was he to question Queen Medb? She was a queen, and he was nothing but an elevated woodsman.

Although uninjured, Nechtan felt a despondency bubbling under his shirt, ants of sweat crawling over his skin. With another night of soulless fires and tight belts, his warriors would start to think of a change. Start to listen to the claims of those who considered themselves his better. Nothing would stop them from turning to a captain who could feed them, provide them with enough silver to live a decent life. A captain who would keep their promises, at the very least.

‘If we hurry, we’ll make Ráth Droma before sunset,’ he called. ‘We’ll demand respite from the chief. Keeps a good vat of mead, does yer man Mathaman.’

‘What makes you think he’ll welcome us, this chieftain?’ Sharvan asked, staring at him with his little pig eyes.

Nechtan glowered at his redheaded second, before turning away and sighing. Sharvan made his warhorse seem like a pony. He was a good fighter, a good leader, his bulk demanding obedience, but his constant questions and less than average brainpower grated. You’re a bit of a dog shite and no mistake, Nechtan thought, turning to stare into the forest.

‘We go way back,’ Nechtan said, wondering how many times he needed to repeat it.

‘Aye, so you said. Often. Said you hanged a usurper. But that happened years back. Long before they routed us at Gáirech. You think this cúl an tí chief will remember? You think he’ll feed us even if he does remember?’

‘Aye, he’s a bogman. So, if he’s even heard of Gáirech, he won’t show no favour. He’s no love for Ulster neither. Besides, the Cailleach claims victory. Says she got the bull, and the Ulster king ran. She could be right, his kingship’s over either way. The Red Branch won’t forgive him running like a beaten cur.’

‘Won, did we?’ Sharvan scoffed. ‘Good of the lady to forget Cú Chulainn cutting swathes through us like we was harvest wheat.’

‘None of that fills our bellies,’ Sharvan interrupted with a snort. ‘Nor give us the promised silver. Them as rule, can stick their ideas of winning up their holes.’

Nechtan stood in his stirrups and turned back to the warriors riding in his wake, his fían. There were thirty, and he would welcome all of them beside him in a shield wall, even though they were not the best fighters. The band had included fifty-two fénnid when they rode with the Cailleach just a handful of days before. Now the best of them were rotting on the field at Gáirech, feed for the animals. Crows and wolves, mostly. Maybe the occasional fox when the wolves allowed.

The view behind did not improve his unease.

There was none of the usual banter as they rode towards the ráth of Mathaman, just a stench of blood and a profusion of dirty, rag wrapped wounds. They were tired. War-weary and poor. Captain Bréannin was meant to pay their purse with spoils from the raid on Cooley, but the army of Ulster took all the loot, along with most of Nechtan’s best warriors. It was always the best who died, being first in the shield wall. Each wall meant having to start again, which he hated. This time, there were no spoils to pay for the rebuild. He would have to grab some young ‘uns. Bring them up to be fighters; fill their heads with tales of gold and glory. It would be a long and slow road, which would push back his buying a steading where he could raise some cattle and a baby or two. Get himself a beautiful redheaded seeress like the one who predicted the outcome of the cattle raid. He was too far away to clearly hear the name she gave before forecasting Cú Chulainn’s murderous attacks. But she reminded him of a redheaded whore he knew on Ynys Môn. Next time he was on the island, he would pay her some coppers and live his dream, if only for a short while.

If he ever made it to the island. He was not sure he would make it out of this bunghole of a forest. With the giant acting as their voice, he could see himself hanging from a tree before nightfall.

Trying to hide the grimace he felt creasing his mouth, he turned and made an attempt to appease Sharvan.

‘He’ll give us our traveller rights. I’m sure.’

‘We’ll take them. From what I remember, there’s four guards, different generations of the same family. Rusty shirts. Blunt swords. Big guts from lots of mead and no exercise. Gráinne could take them on her own, one arm tied behind her back.’

‘Did you hear that Gráinne? You’re to be the razer of Ráth Droma,’ Sharvan called, raising a laugh for the first time since the eve of Gáirech, that one-sided battle they should have won with ease. They had twice the numbers of Ulster’s Red Branch. Nechtan still didn’t understand how they lost. Bad leadership aside, they should have just overwhelmed the opposing wall.

‘Hush. We near the gates. I know the gatekeep is older than the Dagda, but he might have a hearing horn,’ Nechtan called. Those who heard laughed again.

‘Never mind the talk,’ Sharvan said. ‘We take our rights by force, and Bréannin will be after us with a company of Leinster’s best.’

‘The Leinster company ran, leaving Bréannin sat on his horse like a shite on the doorstep of a royal roundhouse. I doubt he’s still a captain. If the Cailleach got hold of him, I doubt he’s still alive. No, we’ve no need to worry about Leinster’s best, nor anyone else’s. The kingdoms are in a mess, none more so than Leinster.’ Nechtan hesitated, thinking.

‘You think Leinster defenceless?’ Sharvan asked with a smile, made plain by the movement of his beard.

‘They have much to deal with before they can worry about the likes of one small fían.’

‘We are free to raid,’ Nechtan nodded.

As the shadows darkened, they turned off Slíghe Chualann and arrived at the closed gates of Ráth Droma, nestled in a vale back from the road. Nechtan shook his head at the wooden trunks on top of the ráth as they neared. The settlement was a picture of tranquillity, the ramparts free of guards. Nothing of the cattle raid had yet made its way this far south. The bog men and woodcutters were still unaware of their danger, which he knew would not be for long.

Things were set to change after Gáirech.

Micheál Cladáin studied the classics and developed a love of ancient civilizations during those studies. Learning about ancient Roman and Greek cultures was augmented by a combined sixteen years living in those societies, albeit the modern versions, in Cyprus and Italy. As such, Micheál decided to write historical fiction, trying to follow in the footsteps of such greats as Bernard Cornwell and Conn Iggulden. Because of his Irish roots, he chose pre-Christian Ireland as his setting, rather than ancient Italy or Greece.

Micheál is a full-time writer, who lives in the wilds of Wexford with his wife and their border terriers, Ruby and Maisy. 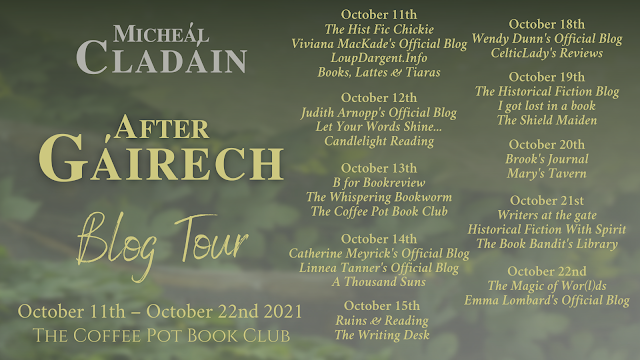