I'm thrilled to share my review of Wayward Voyage by Anna M Holmes, a gripping adventure set in the era when pirates roamed in the West Indies!

Anyone familiar with 18th century in the West Indies and the eastern colonies of North America will be familiar with Anne Bonny, ’Calico’ Jack Rackham and Mary Read, three colourful characters who roamed the seas. Wayward Voyage is Anne's story.

As a young girl, Anne Cormac sets out from Cork to the New World with her parents and her brother in the early 18th century, but Caroline isn’t the promised land they expected. Still, her father manages to buy a plantation from a German settler and the family is soon settled into their new community near Charles Town. Anne grows up doing things her own way, like roaming the forests dressed as a boy. Her wilfulness shows from an early age, and her desire not to conform to social restrictions see her in trouble several times.

Raped by a stranger as a girl, she killed him so he could never inflict that pain onto another girl. The scene is pivotal to her life, I think. A girl wronged, she took revenge. It set her up as someone who does what she wants, and usually gets away with it.When she is of marriageable age, her longterm friend and suitor, Richard, proposes, and she panics. Both families are keen on the union, but it would mean she'd be stuck in their community for life, bearing children, going to Church, and engaging in social activities expected from wives.

A loner who cherishes her independence, this scares Anne to death, so she escapes on a ship bound for the West Indies, but only (somewhat ironically) as a wife to a sailor, James Bonny. They settle in ’New Providence’ in the Bahamas, which was nothing like the name promised. The new town of Nassau is full of drunk sailors looking for work and pirates, it's a boring hellhole she didn't expect. The weak governor barely manages to keep the King's peace – until a new governor, Woodes Rogers, arrives, taking a tougher stance towards pirates, but also offering pardons to those seeking to mend their ways.

Whilst James sails the seas on merchant ships, trying to make a meagre living, Anne has lofty ideas of her station and seeks thrills unseemly for women at the time. Then she meets ’Calico’ Jack Rackham, and her path is clear. Although he is reformed, she pushes him back into piracy but insists joining him on his ship. This causes a massive rift with his crew, especially when her volatile actions lead to their disapproval.

On their forays, they are soon joined by Mary Read, a girl who escaped poverty in England by dressing as a man and working on ships. Captured by the pirates, Mary soon converts to their ways. Until fate intervenes...

I've been familiar with Anne Bonny's story, so I knew the general history behind her, but the author brings this unusual woman vividly to life. She paints Anne as unpredictable from an early age, disinterested in female pursuits of the times, and of an independent spirit that was so at odds with societal expectation of a woman. Brash and selfish, Anne is not a likeable character. She goes through life hurting the people who love her – her parents, her brother, her friend who asked for her hand, and her poor husband, James.

Later, even Jack, her lover, and Mary are at the receiving end of her aggression. As are the unfortunate souls on the William, the ship they've taken over.

At a time when women had to ’know their place’, girls like Anne stands out. They were usually forced into conforming, but Anne is different. She takes no prisoners.

Anne is a truly headstrong character, to a point when I found her annoying. The reason why she treats everyone the way she does becomes clear at the end, why she pushed away everyone who loved her. Anne finds her epiphany, but is it too late?

The story is told in different points of view: Anne's, Mary's, Jack's, and Woodes Rogers’ for the other side. This provides us with a variety of behaviours and attitudes apart from Anne's. We see carefree Jack, quiet but determined Mary, and Rogers’ unwavering attempts at cleansing the seas of the pirates, with the limited means at his disposal.

Anne's life can't have been easy, and Ms Holmes doesn't shy away from showing the dark side of life in those times. It wasn't the fantastical swashbuckling romance often associated with pirates in the Caribbean, but a rather gritty setting involving selfish people seeking to get rich quick, or dying by failing to do so. The author paints a vivid picture, including themes some readers might be sensitive to, but it all adds to the atmosphere of the setting. It wasn't a pretty time or place. It was rough, and this realistic depiction is the beauty of this novel.

Rich in historical detail, Wayward Voyage sets the perfect scene for Anne Bonny and her associates. 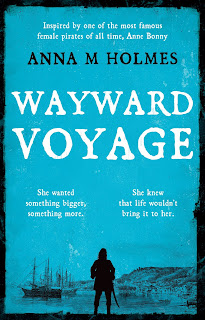 Anne is a headstrong young girl growing up in the frontier colony of Carolina in the early eighteenth century. With the death of her mother, and others she holds dear, Anne discovers that life is uncertain, so best live it to the full.

She rejects the confines of conventional society and runs away to sea, finding herself in The Bahamas, which has become a nest for pirates plaguing the West Indies. Increasingly dissatisfied with her life, Anne meets a charismatic former pirate, John 'Calico Jack' Rackham, and persuades him to take up pirating again, and she won't be left onshore.

The Golden Age of Piracy is a period when frontiers were being explored and boundaries pushed. Wayward Voyage creates a vivid and gritty picture of colonial life in the Americas and at sea. 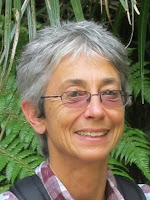 Anna is originally from New Zealand and lives in the U.K. with her Dutch partner.

WAYWARD VOYAGE is Anna’s first novel. She has been fascinated by the lives of women pirates, Anne Bonny and Mary Read, for a long time. Some years ago, she visualised this story as a screenplay before exploring and building their world more deeply as a novel. WAYWARD VOYAGE made a longlist of 11 for the Virginia Prize in Women’s Fiction 2020.

BLIND EYE an eco-thriller, will be published by The Book Guild in September, so this year, 2021, Anna will have two novels coming out. Her screenplay, BLIND EYE, is joint winner of the 2020 Green Stories screenplay competition.

A documentary about pioneers of flamenco in the UK that Anna produced and directed was screened in Marbella International Film Festival and in London. This passion project ensures a slice of cultural history has been captured. It is available on YouTube and via a portal on her website.

She holds a Humanities B.A, a post-graduate diploma in Journalism and an M.A. in Dance Studies. Initially she worked as a radio journalist before a career in arts management working with U.K. Arts Councils and as an independent producer, dance history lecturer and she has run a dance development agency. 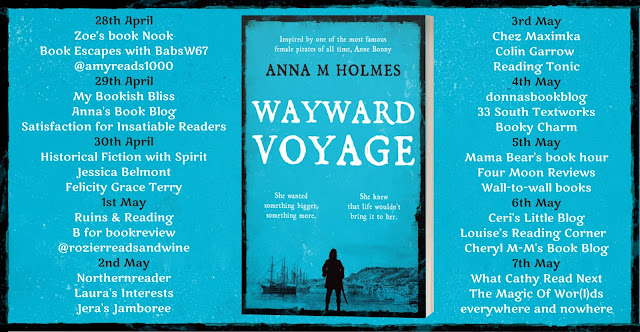