Today, I'm delighted to share my review for a rollicking seafaring adventure with a strong breeze of romance: Discerning Grace by Emma Lombard.

My thanks to The Coffee Pot Book Club for a copy. 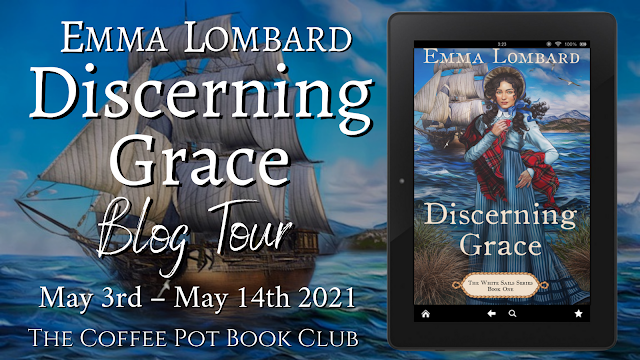 Book One of The White Sails Series

My, what can I say? I'm still trying to get my breath back!

Discerning Grace sweeps you off your feet, and straight across the Atlantic Ocean in a whirlwind of adventure, emotions, grave dangers, and, eventually, a sense of redemption.

From the first page, the fast-paced plot doesn't let you go, so get yourself comfortable, grab a drink and some chocolate (you'll need it!), and join the journey!

Grace Baxter is shocked to discover her uncaring father's plot to marry her off to the most unsuitable suitor: Lord Silverton, a slithering, slobbering and pompous old fool. When he enters her bedroom uninvited and tries to force himself on her as her new fiancé, she flees with only the clothes on her back.

But out in the grimy streets of early 19th century London, her chances are low. So she steals a friend's clothes and savings (the poor guy!), cuts her hair, and finds herself signed up as a shipmate on the soon departing HMS Discerning. Captain Fincham and First Lieutenant Seamus Fitzwilliam had attended the dinner at her family home earlier that evening, but she is hoping they wouldn't remember her.

Fortunately for her, she is taken for a teenage boy due to her small stature, and is soon forced to accept the rough life amongst the sailors. She has no time to become accustomed to the closeness with other smelly men, the coarse language, the underlying tensions between groups. In Gilly, her recruiter, she finds a trusty friend and mentor, and soon Jim Buchanan, a grumpy Scot (a bit of a caricature at first, but then he grows into his role) and a bunch of other men become her friends. Until she gets herself into trouble, and blows her disguise!

By that time, the Discerning is already cruising down the South American coast, and is too far from any suitable port to drop her off for the first ship back to England. So poor Fitzwilliam is stuck with her, and she is sorely testing his patience...

Grace is a live wire. She's wilful, and certain her way is the right way. At times, this comes across as spoilt and sullen, and I found myself sighing at her rashness. But coming from an uncaring home, she is so desperate to go her own way, until a mistake costs the life of one of her friends. Her stubborn sense of entitlement is at times extreme, but not unrealistic. Yet, redemption is still far away when fate takes yet another twist.

Fitzwilliam has the patience of a saint! He must be applauded for it. Trying hard not to lose his authority over the crew after the death of Captain Fincham at desolate Port Famine, he is still torn between his protectiveness for her growing into affection, and his position. She doesn't make it easy for him. He's an admirable character you immediately warm to.

And with all this going on, a headhunter is after a reward Lord Silverton has put on her. So Grace again finds herself in more serious trouble.

Silverton is the ultimate antagonist. He could be a 1820s Bond villain. I was looking for a cat! Vile, lecherous, ruthless, ugly, he has no redeeming features at all. Perhaps a bit over the top at times, but great fun to read. You just want to join in when Grace fights him off. Ha!

Discerning Grace is a wonderful adventure that carries you across the ocean, and into desolate lands. Ms Lombard describes the journey beautifully. She has certainly done her research. The hard life on board is well-plotted, and we get a real sense of the smells, the duties, the conditions, and the tough decisions that have to be taken. There is some violence, as you can expect with a plot such as this, but it is all within the context, and not overboard (no pun intended).

The places where they stopped are fascinating too. I read up about Port Famine, intrigued to learn about it. That's what I love about such an immersive story as this one – if it makes you research something you'd never heard about!

If you love seafaring adventures with a strong sprinkling of romance, a growing sense of danger, and fascinating characters, Discerning Grace should be on your reading list. I can't wait for the next instalment in the trilogy. 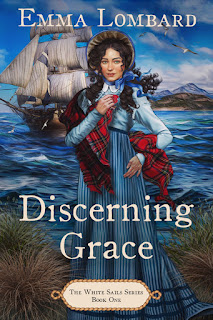 As the first full-length novel in The White Sails Series, DISCERNING GRACE captures the spirit of an independent woman whose feminine lens blows the ordered patriarchal decks of a 19th century tall ship to smithereens.

Wilful Grace Baxter, will not marry old Lord Silverton with his salivary incontinence and dead-mouse stink. Discovering she is a pawn in an arrangement between slobbery Silverton and her calculating father, Grace is devastated when Silverton reveals his true callous nature.

Refusing this fate, Grace resolves to stow away. Heading to the docks, disguised as a lad to ease her escape, she encounters smooth-talking naval recruiter, Gilly, who lures her aboard HMS Discerning with promises of freedom and exploration in South America.

When Grace's big mouth lands her bare-bottomed over a cannon for insubordination, her identity is exposed. The captain wants her back in London but his orders, to chart the icy archipelago of Tierra del Fuego, forbid it. Lieutenant Seamus Fitzwilliam gallantly offers to take Grace off the fretting captain's hands by placing her under his protection.

Grace must now win over the crew she betrayed with her secret, while managing her feelings towards her taciturn protector, whose obstinate chivalry stifles her new-found independence. But when Grace disregards Lieutenant Fitzwilliam's warnings about the dangers of the unexplored archipelago, it costs a friend his life and she realises she is not as free as she believes. Emma Lombard was born in Pontefract in the UK. She grew up in Africa—calling Zimbabwe and South Africa home for a few years—before finally settling in Brisbane Australia, and raising four boys.

Before she started writing historical fiction, she was a freelance editor in the corporate world, which was definitely not half as exciting as writing rollicking romantic adventures. Her characters are fearless seafarers, even though in real life Emma gets disastrously sea sick.

Discerning Grace is the first book in The White Sails Series. 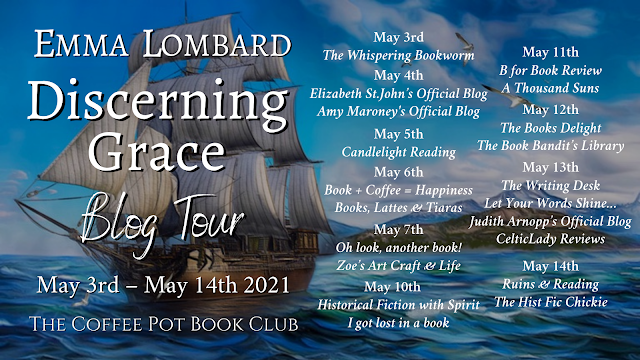