Today, I'm delighted to welcome my friend Nancy Jardine, author of gripping historical romantic adventures. She's telling us a bit about the form of language used in her Celtic Fervour series set in Roman Britain.

The first novel in the series, The Beltane Choice, is Book of the Month at Ocelot Press, and currently reduced to 99p / 99c! It's a thrilling, fast-paced adventure with a touch of romance that I can highly recommend. 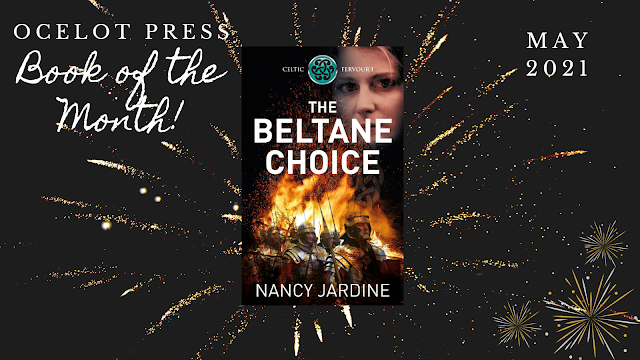 Thank you for  hosting me today, Cathie. It’s a pleasure to be visiting you again.

Aiming for a semblance of linguistic reality in historical fiction

When I began the first drafts of what became The Beltane Choice, I had some difficult decisions to make. For decades, I’d avidly devoured historical fiction set in various eras and appreciated the structure and vocabulary content which emphasised the period that the authors were describing. However, I’d read very little fiction that was set in the Roman Britain era that I wanted to use for The Beltane Choice.

I’d read a number of novels written by authors like Jean M. Auel and Morgan Llywelyn whose style and use of language appealed to me. I’d also read David Wishart and Lindsay Davis whose settings are across the Roman Empire,  but their writing styles were different since they were writing humorous ‘Roman Detective’ fiction. I really enjoyed the escapades of the sleuths like Corvinus, but the chatty writing style used by Wishart and Davis didn’t seem appropriate for my story.

Since there was nothing in the historical record to give me an idea of what the speech cadences of Roman Britain might have been like, I adopted a more formal approach. I avoided using contractions, using I will rather than I’ll, and I made vocabulary choices that I believed were the very best words for my context. 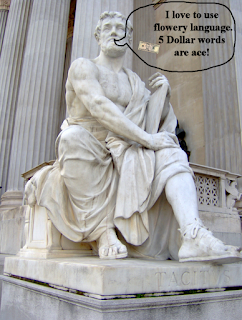 After publication, my writing techniques provoked a few different reader reactions right from the very first reviews. One high quality U.S. review site gave The Beltane Choice a 3* review, claiming it would have been higher if I’d not used so many ‘5 Dollar words’. I’d absolutely no idea what that meant but it was soon pointed out that vocabulary which comes naturally to me, doesn’t come naturally to all readers. There was an indication that if the reader has to reach for a dictionary to find the meaning of a word, then the author has made the book ‘too difficult’, even when the meaning is apparent from the contextual setting. I, as the author, was blamed for not ‘dumbing down’ and simplifying my vocabulary. I should mention that the vocabulary in question wasn’t historical topic-specific words like ‘crannog’ meaning an Iron-Age roundhouse built over water, or ‘Brigantes’ referring to the tribal federation that occupied the bulk of north England 2000 years ago.

The Ancient Roman historical references for first century Roman Britain mainly come from the pen of P. Cornelius Tacitus. If you read his written depictions of famous Romans and Iron-Age tribal figures of the era (in Latin or in translations), they tend towards the very eloquent and super ornate! His orations are for the drama of a performance at the Roman forum – many are quite unrealistic, but they make excellent entertainment. 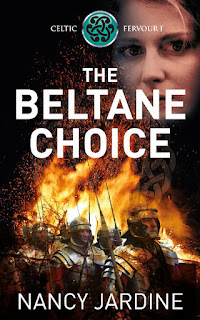 That early review comment about ‘5 dollar words’, I have to be entirely honest, offended me. During my teaching career – around 25 years of which was with 11 to 12 year olds – one of my daily classroom mantras went something like “If you haven’t learned at least one new word today, then we’ve not worked hard enough”. The enrichment of vocabulary was a priority.

I could have dumbed-down the words I used in the subsequent four books of my Celtic fervour Series, but I chose to continue in the same style as The Beltane Choice. If asked now was that a sensible choice to make, then my answer is that I really don’t know. It would have been quicker to do edits had I not maintained the more formal style, but I wouldn’t have felt that I’d created the authentic reality that I’m always aiming for.

Reading and reviewing can be very subjective, of course, and reader priorities can vary tremendously – but variety is what makes writing fiction worthwhile!

Do you, as a reader, like to come across an unfamiliar word in a novel? Or, would you rather only read words you have knowledge of already from previous novels, or from other reading material?

Don’t miss out on the bargains!

During the whole month of May, as the Ocelot Press Book of the Month,  Nancy Jardine’s Celtic Fervour Series of historical adventures will be on special prices.

The Beltane Choice will be 99p  http://getbook.at/findhere

The other 4 novels in the series https://www.amazon.co.uk/gp/kindle/series/B08GCW51G5

will be reduced to £1.99 (equivalent prices across the Amazon network)

Nancy has a couple of competitions on the Ocelot Press Readers page on Facebook during May 2021 where you can win 1) a beautiful Celtic Keyring 2) a signed copy of The Beltane Choice. Join us there and enter the competitions: 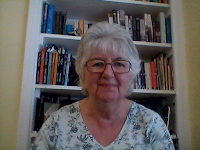 Nancy Jardine lives in Aberdeenshire, Scotland. She creates her fictional characters for her historical; time travel historical; and contemporary mystery/ thriller novels at her usually messy desk. When not writing, researching (a total obsession), reading, or gardening, her young grandchildren will probably be entertaining her. Or, she’ll be binge-watching historical series’ made for TV.

Signing/ selling her novels at local events is great fun, as is giving author presentations – on her novels or on Ancient Roman Scotland – to groups large and small. Both are a fabulous excuse to get away from the keyboard and meet new readers. Zoom sessions have lately been an entertaining alternative to face-to-face events till Covid 19 pandemic rules permit local events to restart.

Current memberships are with the Historical Novel Society; Scottish Association of Writers; Federation of Writers Scotland, Romantic Novelists Association and the Alliance of Independent Authors. She’s self-published with the author co-operative Ocelot Press.

You can find her at these places: