Spotlight: A Sword among Ravens by Cynthia Ripley Miller

Today, I'm delighted to present you an enticing excerpt from Cynthia Ripley Miller's intriguing historical novel, A Sword among Ravens, currently on blog tour with The Coffee Pot Book Club.

A Sword among Ravens is the third in her popular series, The Long-Hair Saga, set in the latter years of the Roman Empire.

If you enjoy historical adventures, check out this enticing excerpt! 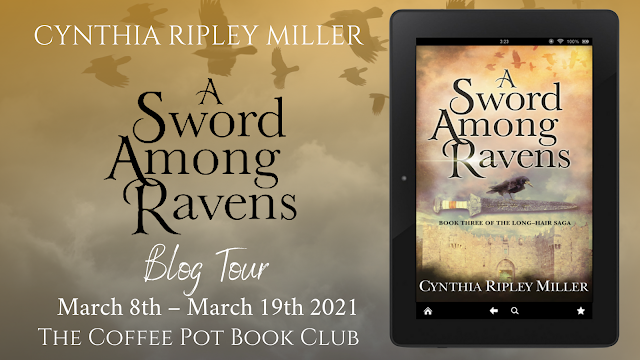 A Sword Among Ravens

Excerpt from the second half of the Prologue: A Husband, a Sword, and a Curse

**AD 447 Roman Province of Dacia Ripensis (Bulgaria) After a battle with the Huns, Tribune Lucius Marcian and his centurion, Darius, discover an iron handle poking through the ground. After deliberation and digging, they open an iron door leading to a small tunnel and free a silver box nestled among the few remaining bones of a human skeleton.

Marcian kneeled and lifted the bundle from its case. With a pivot and his arms extended, he gently placed it on the ground. As Marcian unwrapped the object, pieces of the linen crumbled. A soft flash of light burst through the fabric and struck his eyes; he blinked. When he looked again, a sword, simple in form but strangely beautiful lay nestled in the cloth. Gazing at it, he knew it must be an ancient weapon. The gray metal harbored slight flakes of rust and held a matted gloss. The sword was short, more like an old gladius, and not as long as the standard spatha. The round ivory grip was carved with circular lines. The silver pommel held small, bright-red rubies that sparkled in the light from their tiny recesses. Just below the blunted cross-guard, etched down the center of the blade, gold symbols—similar to those on the surface of the box—flowed in a line.

Darius let out a whistle.

Marcian took a breath and picked it up. “It’s lighter than I thought it would be.” He ran his finger over the flat surface, then gently pressed his thumb to a surprisingly sharp edge just below the tip. “This must be the sword of a king or nobleman, but from where or when?”

“Wherever the sword is from, it could be of great value,” Darius added. “Why else would it be so carefully preserved and hidden?”

Marcian frowned. “Say not a word to anyone in the camp.” Placing the sword back into the silver casket, he closed the box. He slipped the scarf from his brow to his neck, replaced his helmet resting near his feet, stood, and thought, I’ll take this to father in Constantinople. With his power as a senator, he may be able to help me unravel the mystery surrounding this weapon.

Marcian ordered Darius to shut the outer door and cover the site with dirt to protect the grave. Regardless if the bony remnants came from a servant, guardian, or nobleman, they would show respect for the dead, even if they kept the sword. Then Marcian folded the pieces of cloth on top of the sword and closed the lid of the box. He carried it to his horse and, with leather straps, secured it to the backboard of his saddle. Both men mounted and proceeded down the hill.

At the base, Darius took the lead and gave Marcian a sly look. “I’d wager the sword is worth something. Or maybe . . . it carries bad luck—the evil eye.”

“I’ll never wager this sword, not for anything, but I bet it’s more valuable than damned.” Marcian grinned.

The centurion let out a hearty laugh. “Are you sure you’ll never wager?” He put the pouch to his lips. Marcian swore. As he watched Darius drink, a swift and sudden zip pierced the air and careened past him, almost grazing his ear. A sudden horror gripped him. An arrow struck Darius in the neck, and the centurion slumped over.

Marcian slid frantically from his horse using Apollo as a barrier. Twenty feet away, a wounded Hun rested on his knees, his body hunched, a bow resting in his hand. Marcian grabbed his spear from its case and hurled it with all his strength into the warrior’s chest. The impaled barbarian grunted and fell backward. Marcian ran to Darius. The centurion had survived the battle, but now he sat lifeless in his saddle—bled to death.

Marcian kicked the ground and went to the dead Hun. “Son of a bitch!” he swore, yanking the spear from the Hun’s body and stabbing him again. He circled around, letting out an angry cry, ripped out the spear, and threw it down. Darius the Goth had ridden by his side from Marcian’s first days with the cavalry.

Rain started to fall. Marcian pushed Darius’ body forward and tied him to his saddle. Mounting Apollo, he grabbed the reins of Darius’ horse. His soldier and friend had fought the Huns bravely and lived. But now, by an unexpected twist of fate, he was dead.

Marcian stared at the dark clouds as a brooding premonition shook him. He prayed the sword carried no curse. 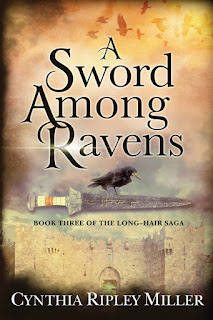 In a grave, on the edge of a Roman battlefield, an ancient sword has been discovered. Legend claims it belonged to King David of Israel and carries a curse—those who wield it will tragically die—but not the chosen.

AD 455. Arria Felix and her husband, Garic the Frank, have safely delivered a sacred relic to Emperor Marcian in Constantinople. But now, Arria and Garic will accept a new mission. The emperor has asked them to carry the sword of King David of Israel to the Church of the Holy Sepulchre in Jerusalem where Arria will dedicate it in her murdered father’s memory.

As Arria and Garic travel into the heart of the Holy Land, they face many challenges and dangers. Their young daughter is missing then found in the company of a strange and suspicious old monk. A brutal killer stalks their path. And a band of cold-blooded thieves is determined to steal the sword for their own gains. But when Arria confronts the question of where the sword should truly rest—old friendships, loyalties, and her duty are put to the test like never before. At every turn, Arria and Garic find themselves caught in a treacherous mission wrapped in mystery, murder, and A Sword Among Ravens.

Cynthia Ripley Miller is a first generation Italian-American writer with a love for history, languages, and books. She has lived in Europe and traveled world-wide, holds two degrees, and taught history and English.

Her short fiction has appeared in the anthology Summer Tapestry, at Orchard Press Mysteries.com, and The Scriptor. She is a Chanticleer International Chatelaine Award finalist with awards from Circle of Books-Rings of Honor and The Coffee Pot Book Club. She has reviewed for UNRV Roman History, and blogs at Historical Happenings and Oddities: A Distant Focus and on her website, www.cynthiaripleymiller.com

Cynthia is the author of On the Edge of Sunrise, The Quest for the Crown of Thorns, and A Sword Among Ravens, books 1-3 in her Long-Hair Saga series set in Late Ancient Rome, France, and Jerusalem. Cynthia lives outside of Chicago with her family, along with a cute but bossy cat. 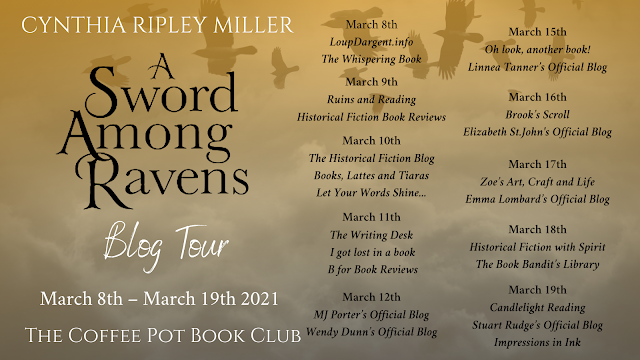