Today, I'm particularly delighted to share my review for a wonderful novel, The Lengthening Shadow by bestselling author, Liz Harris.

My thanks to The Coffee Pot Book Club for a review copy as part of a blog tour for The Lengthening Shadow. 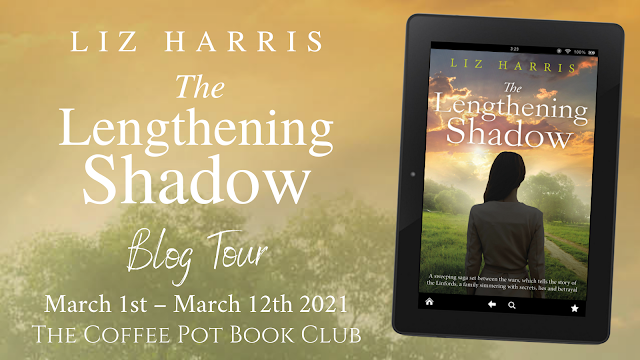 This is the first novel I've read by Liz Harris, but it won't be my last. It was occupying my thoughts long after I finished reading it.
Dorothy is a young English auxiliary nurse who meets – and falls in love with – a German internee, Franz, in the later stages of World War I. But she knows her family won't accept the match, especially her Uncle Thomas who lost a leg and a hand in the war. After all, Franz is the enemy, even if he never fought but was in England at the outbreak of the war. She makes the tough decision to follow him to Germany, and they eventually settle in a village where he works as a teacher. This cuts her off from her family.
The novel switches between Dorothy's account, and those of several members of the Linford family. Their stories take you from 1917 to the mid-1930s. Dorothy's children are born, her younger sister and niece get married, her brother Robert has a love interest their father disapproves of, and there's a mystery surrounding Thomas' wife, Alice...
The plot is fast-paced; it keeps you hooked. I finished reading the novel in two evenings as I was so engrossed in what happened, I just had to read on.
The setting in England post-WWI is well described. You get a sense of the existing class system – the wealthy Linfords with their country manor and servants (in stark but fascinating contrast to Dorothy's life in Germany). The descriptions of daily life in London of those who could afford a better existence are truly realistic, as are the clearly-defined roles for men and women as part of a still-rigid society.
The Linford family building business benefits from the building spree post WWI, but there are undercurrents between various family members that point at more intrigue, likely featured in the other novels in the series (which I now have to get as I want to know!).

Dorothy's experiences in Germany are heart-warming at times, and harrowing at other times. As a German, I felt the way Ms Harris described Dorothy's daily life in a German village in those times very realistic. The German words she uses on occasion strongly add to the sense of place (’Kaffee und Kuchen’ is still a thing, 100 years later), and their friends, neighbours and the other villagers are all clearly defined in their mannerisms.
The author cleverly captures Dorothy's growing sense of unease when she's faced with the gradually changing situation in Germany in the late 1920s / early 30s – the ’lengthening shadow’ – and we as readers can sense the looming danger with her, and the challenges she encounters.
The only cliché I found was that Franz was a blond, blue-eyed German. As a southern German, I don't think I met many of those, though they might be hiding in the north of the country! But otherwise, Ms Harris was spot on with Dorothy's daily routine, the political changes that went unquestioned for too long, and how they affected ordinary Germans – Christians and Jews alike – through the early 1930s.

The Lengthening Shadow is a wonderfully immersive novel. You are quickly engrossed in the Linford family secrets, their trials and challenges, and you just want to read on. Highly recommended for fans of historical fiction and family sagas!
~~~
Blurb: 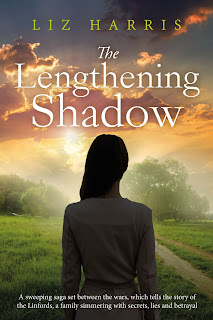 When Dorothy Linford marries former German internee, Franz Hartmann, at the end of WWI, she’s cast out by her father, Joseph, patriarch of the successful Linford family.
Dorothy and Franz go to live in a village in south-west Germany, where they have a daughter and son. Throughout the early years of the marriage, which are happy ones, Dorothy is secretly in contact with her sister, Nellie, in England.
Back in England, Louisa Linford, Dorothy’s cousin, is growing into an insolent teenager, forever at odds with her parents, Charles and Sarah, and with her wider family, until she faces a dramatic moment of truth.
Life in Germany in the early 1930s darkens, and to Dorothy’s concern, what had initially seemed harmless, gradually assumes a threatening undertone.
Brought together by love, but endangered by acts beyond their control, Dorothy and Franz struggle to get through the changing times without being torn apart.
Buy Links:
Amazon UK: https://www.amazon.co.uk/dp/B08S7LCRH3
Amazon US: https://www.amazon.com/dp/B08S7LCRH3
~~~
About the Author:
Liz Harris 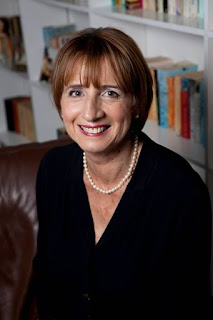 Born in London, Liz Harris graduated from university with a Law degree, and then moved to California, where she led a varied life, from waitressing on Sunset Strip to working as secretary to the CEO of a large Japanese trading company.
A few years later, she returned to London and completed a degree in English, after which she taught secondary school pupils, first in Berkshire, and then in Cheshire.
In addition to the nine novels she’s had published, she’s had several short stories in anthologies and magazines.
Liz now lives in Oxfordshire. An active member of the Romantic Novelists’ Association and the Historical Novel Society, her interests are travel, the theatre, cinema, reading and cryptic crosswords. To find out more about Liz, visit her website at: http://www.lizharrisauthor.com
Connect with Liz:
Website: http://lizharrisauthor.com/
Twitter: https://twitter.com/lizharrisauthor
Instagram: https://www.instagram.com/liz.harris.52206/?hl=en
Facebook: https://www.facebook.com/lizharrisauthor 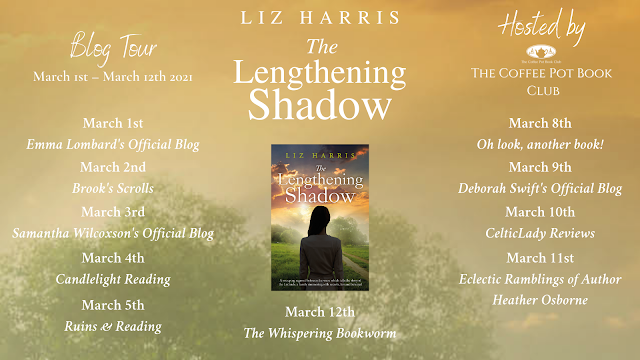