I'm delighted to share my review for The Warrior's Innocent Captive by Ella Matthews, an enjoyable historical romance.

Many thanks to Rachel's Random Resources for an ARC copy.

The House of Leofric Book Three

The Warrior's Innocent Captive takes us to medieval England in a fast-paced tale of deceit, blackmail and love.

Erik Ward is steward to the Earl of Borwyn, and content with his lot. Of illegitimate stock, he has accepted his role in supporting the earl, their shared father's legitimate son.

He has been watching Linota Leofric, daughter of a traitor, from afar for a long time, even hoping he might have a chance to wed her. But when she's offered a large dowry by the Earl of Ogmore on her brother's marriage to the earl's daughter, he knows his chances are squashed.

When Linota is kidnapped on the way to her brother's manor, Erik rescues her. But he hadn't counted on a twist that would see his loyalties tested to the limit.

The Warrior's Innocent Captive is a fast-paced romp across beautiful countryside. As Erik and Linota get closer, he becomes more and more torn. Not wishing to lie to her, he hides the dark secret he's carrying, but it turns into a heavy burden. Throughout the story, Erik's dilemma is shown realistically. We sense his frustration, his anger, which bursts forth later in the story, not surprisingly.

Linota, on the other hand, falls for her saviour but, unaware of her dowry and the circumstances of his sometimes strange behaviour, she doesn't understand his reticence. Her feelings run from deliriously happy to angry to sad in a rainbow of emotions. She is naïve, but also savvy. She's quiet, aware of her place as the daughter of a man executed for treason, which fits her upbringing, and she always stays in character.

The blossoming romance between the two is not rushed, but the feelings are shown gently and slowly as they grow. We witness wonderful character development.

The Warrior's Innocent Captive is both a fast adventure, with Erik running against hurdles thrown into his path, and a gentle love story between two characters who are as flawed as their families, but who will grow into self-assured individuals by the end of the novel. A highly enjoyable read! 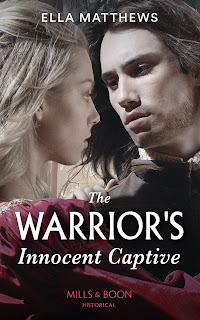 His family or love

As steward to the Earl of Borwyn, Erik Ward had only admired sheltered noblewoman Linota Leofric from afar – until he has to escort her on a dangerous journey. When she’s kidnapped, he rescues the courageous beauty, revelling in finally having her in his arms.

Ella Matthews lives and works in beautiful South Wales. When not thinking about handsome heroes she can be found walking along the coast with her husband and their two children (probably still thinking about heroes but at least pretending to be interested in everyone else). 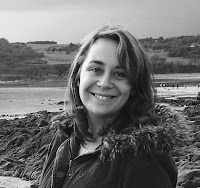 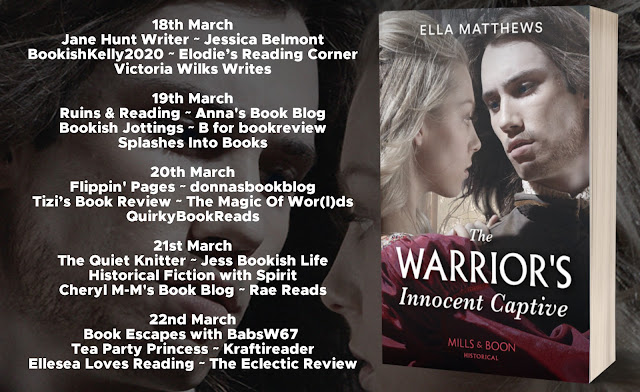