Review: Tempted by the Runes by Christina Courtenay

I'm thrilled to share my review of this latest instalment in Christina Courtenay's brilliant time-travel series, Tempted by the Runes. This time, we're off to remote Viking-age Iceland! And what an exciting adventure this is!

Tempted by the Runes

This is the fourth novel in the series, and the setting is as exciting as in the other stories. Maddie is yet another family member who goes a-travelling through time when she finds a folding knife in the river Liffey in Dublin at low tide. She knows the inscription well.

Her brother, Storm, was on a pub crawl, so she'd ventured out – in her Viking re-enactment clothes – when she stumbled across the artefact. In the spur of a moment, she decided she wanted her own Viking-era adventure. Listening to Linnea and Sara, and having met their husbands, was no longer enough. So she cuts herself whilst saying the fateful words that catapult her back to Dublin in AD 875.

But her arrival did not go to plan when she was set upon by four thugs – until a tall, fair Viking fought them off. Well, Maddie's martial arts did help a bit too, but it was not enough to prevent her being knocked unconscious. When she wakes, she finds her head tended to – but she's on a ship, bound for Iceland!

Geir recognised the signs, and when Maddie tells him about the knife, his suspicion grows. Both his brothers were married to time-travelling women, so surely meeting Maddie was fate, or not?

Convinced the Norns brought them together, and refusing to return to Ireland, Geir and Maddie strike a deal. She would stay a while and help set up their new settlement, then she was free to go. But he wanted to learn about her world too, and he found himself falling in love with her.

But Maddie had been bullied in school, and she deems his compliments to be flattery. After all, apart from a couple of thrall women, she was the only other unwed female. He had no choice. Surely that was why he lusted after her, not for herself?

As weeks turn into months, they settle into their new-claimed place in a quiet Icelandic bay. But their new life is not without dangers. The small group has to look after their animals and crops well, but fortunately there are fish aplenty. But they are ill-prepared for a raid...

As with all the novels in the series, Ms Courtenay has researched the setting very well. She conveys to us a real sense of Viking age Iceland – an island ripe for the picking, but not without its drawbacks. A harsh land, but also beautiful. I loved the inclusion of a hot spring, which loosely reminded Maddie of a hot bath in the 21st century.

The main and supporting characters are all well-defined, and definitely ’people’ from their times. Geir is a realist, wanting to carve out his own life as back home there is not enough space for him. He has something to prove, and he is desperate for this new settlement to succeed.

Maddie is a Millenial, with the social conscience of wanting to make the world a better place. Her whole attitude is very 21st century, and of course starkly at odds with Viking society. Whilst her views are admirable these days, but her insistence that only her way was right felt too modern to me. When she sulks after Geir appears with baby seal pelts (which he had not killed), she is off in a huff. Her reaction is that of a sullen teenager which I suppose she is, aged 19. As abhorrent as this is to our eyes, it did not matter to her that the pelts would keep the young children warm in the harsh winters, so I found her reluctance to even try to understand Geir's world frustrating.

Overall, I found her too insistent on 21st century customs and views, some of which Geir accepted, much to the surprise of his fellow settlers. He'd known about the modern-day abhorrence of keeping thralls, so when he frees his, for them to become valued members of their small community instead, it makes much sense. However, at times I could feel his annoyance at her insistent views, and to me, she was taking the 21st century into the 9th, whilst not being prepared to give any thing in return. He agrees to indulge her, as he wants her as his wife, but I find her views – however benevolent we regard them these days – patronising. As if the Vikings were clueless about their environment. (Unlike modern mass production, these settlers killed to survive, for meat and furs.) And her method to get him to do what she deemed right reminded me of emotional blackmail. Sadly, I did not find Maddie likeable.

I did like Geir, though. He is not a forceful Viking, but a strategic settler. He faces all his troubles head-on, and does not shy away from defending his small community in man-to-man combat. Loyal and honest, he is fair in punishment and towards all members of their small group. Remarkable, but sometimes too easily convinced by Maddie's views.

Tempted by the Runes has a gripping plot, that sees Maddie and Geir struggle with their growing feelings towards each other, but also with their new life in the remote bleakness of Iceland. Ms Courtenay brings the setting across wonderfully, and we get a real sense of their daily challenges. Their life is described in great detail, and the author uses that opportunity to share her extensive research. I thoroughly enjoyed that glimpse into a past life in such a difficult environment.

At times, I found the prose slightly too modern, but it did not jolt me out of the plot, which I found engaging throughout, with a few clever twists thrown in. A challenging adventure which the characters dealt with perfectly.

As the other titles in the series, Tempted by the Runes does not disappoint. It is a romantic time-travel novel that I can highly recommend. 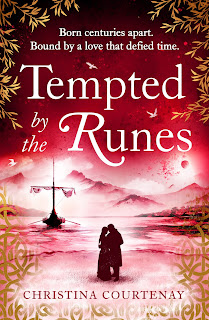 Born centuries apart. Bound by a love that defied time.

She couldn’t believe her eyes. The runes were normally so reliable and she had never doubted them before.

Madison Berger is visiting Dublin with her family for a Viking re-enactment festival, when she chances upon a small knife embedded in the banks of the Liffey. Maddie recognises what the runes on the knife’s handle signify: the chance to have her own adventures in the past.

Maddie only intends to travel back in time briefly, but a skirmish in 9th century Dublin results in her waking up on a ship bound for Iceland, with the man who saved her from attack.

Geir Eskilsson has left his family in Sweden to boldly carve out a life of his own. He is immediately drawn to Maddie, but when he learns of her connection to his sisters-in-law, he begins to believe that Fate has played a part in bringing them together. Amidst the perils that await on their journey to a new land, the truest battle will be to win Maddie’s heart and convince her that the runes never lie…

Christina Courtenay writes historical romance, time slip and time travel stories, and lives in Herefordshire (near the Welsh border) in the UK. Although born in England, she has a Swedish mother and was brought up in Sweden – hence her abiding interest in the Vikings.

Christina is a former chairman of the UK’s Romantic Novelists’ Association and has won several awards, including the RoNA for Best Historical Romantic Novel twice with Highland Storms (2012) and The Gilded Fan (2014), and the RNA Fantasy Romantic Novel of the year 2021 with Echoes of the Runes. Tempted by the Runes (time travel published by Headline 9th December 2021) is her latest novel.

Christina is a keen amateur genealogist and loves history and archaeology (the armchair variety).

Giveaway to Win a signed paperback copy of Tempted By The Runes,
a pair of silver Thor's hammer earrings and a Thor's hammer Christmas tree bauble (Open INT) 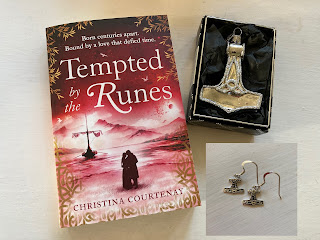