Today, I'm delighted to share an exciting excerpt from Clement: The Green Ship, a wonderful YA historical novel by Craig R. Hipkins. Have a look! 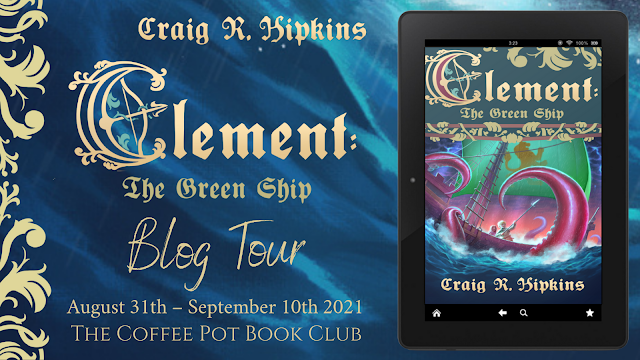 After crossing the ridgeline, they soon found themselves at the top of a small rocky and windswept hillock. Clement recognized it from earlier except it was now pitch dark, with only the moonlight to light their way. As they were standing there looking down into the valley toward the longhouse, the sky suddenly began to shimmer in a glistening green light. Waves and ribbons of green and velvet danced across the heavens in majestic harmony with the stars.

“Oh, look Clement! It is beautiful!”

Mesmerized by the sight, the two youths stood there in awe, despite the cold and frigid air.

“Why, it is the Northern Lights,” Clement said suddenly.

“I have never seen anything like it,” she said.

He smiled. “Our ancestors say it is a skybridge from the earth to the heavens.”

“Maybe it is beckoning us to follow! It is almost as if we have found paradise, Clement!” she said, turning to him.

He was holding both of her hands and no longer looking at the aerial phenomena that bathed them in the placid light of love. He was looking at her. He then brought her close to him and they kissed. For a moment or so, they just held each other, his arms wrapped around her waist and her hands caressing his long blond locks. The heavens danced.

Suddenly, she stopped kissing him. “Clement, where is your cap?”

Embarrassed, he placed his left hand on his head as if he were searching for it.”

“Oh…yes, my wicked uncle is nothing like you, Dagena. He would rather pull my hair than play with it,” he said with a chuckle.

She playfully imitated that act and they both started giggling.

“We had better grab my bow. By now, they have found out I have escaped. Once I have my bow, there is not a man alive who can hurt us, Dagena.”

He grabbed her hand and they hurried down the wind-swept hill into the valley and were soon at the longhouse. Clement’s bow and quiver were next to the old broken table they had found earlier that day. Dagena had also snatched a wool blanket, a water horn and some hard biscuits that she had stuffed in a pouch. She strapped it to her shoulders.

“Do you think they will come here looking for us?” she asked.

He was attaching his quiver to his belt and peering up at the ridgeline from which they had just come.

“I don’t know, Dagena, but some of them know of this place so we cannot risk it. We must keep walking into the night.”

“I heard some of them talking,” she said. “They are afraid of that monster.”

“Well, Sven won’t be. He will come searching. He hates me, and when he finds out that I have eluded him again, his wrath will not be tamed by reason… and you, Dagena…you too will be one of his intended victims. I will not let that happen.”

They continued onward, heading northwest, using Clement’s knowledge of the stars to guide him. By his reckoning, they were hugging the coast of this strange land. He wanted to keep the sea in sight. There was a possibility his men might be able to take back the Green Ship, and, if he could possibly signal to them from the shore, there was a chance they might be rescued. Sir William had told him he had boarded his men on the Green Ship, but he wondered if it was a bluff. He could not picture in his mind, Jacques or Baldwin surrendering, or being caught off guard. They would have been either tricked or fought to the death. Ultimately, the burden of responsibility fell on him. He was the admiral of this fleet and had, thus far, been outmaneuvered. However, he was not yet defeated.

They walked on in the darkness, holding hands and feeling a somewhat ethereal and almost supernatural strength from the shimmering green lights in the northern sky. They were careful with their footsteps, trying to avoid the snowy patches that would reveal their tracks to their possible pursuers. The undulating landscape was gravelly, with hardened moss and the occasional stand of willows. They must have traveled a few miles before Clement found what he was looking for. It was a rocky overhang on the side of a cliff. A perfect place to shelter for the rest of the night. The chances of Sven finding them here was so remote as to be almost non-existent. He could even start a small fire with some of the willow branches. He estimated they were at least three miles from the camp and the fire would be hidden from view by the cliff wall, even from the highest point on the ridge line.

He gathered some loose branches and some dead moss and began making a fire pit with some rocks. The temperature had dropped rapidly since they had escaped from the camp and he noticed Dagena shivering miserably, despite her warm wool cloak.

“Don’t worry, Dagena. I will have a fire burning in no time. You will see,” he said cheerily.

He went to work with his flint and steel while she sat with her back up against the rock, smiling and watching him. Every so often, he would glance at her and smile back. Finally, there was a spark and his cheeks went to work, blowing on the dead moss. He added a few twigs and soon had a small fire burning. He had dragged a dead willow back and began hacking away at the limbs with his sharp dagger.

“And to think this dagger almost hacked my finger off a short while ago,” he said, turning to Dagena.

She shook her head. The smile had not left her face.

When he was done, he added enough fuel to keep the fire burning for at least an hour. He sat with his bow in his lap next to Dagena, who had thrown the blanket across their shoulders. For the first time since their escape from the camp, they heard the wailing sound of the lonely beast, but neither of them feared it.

“What do you think that creature is?” she asked him.

He was looking into the distance, thinking about her question, and finally turned to her.

“Tonight, it is our protector from evil. Are you warm enough, Dagena?”

“As long as you are here with me, Dagena.”

They gazed up at the dancing heavens. The night was crystal clear and, suddenly, a shooting star blazed across the cold firmament, streaking across Orion’s Belt. A short time later, the wind began to blow the powdered snow off the cliff above them, threatening to extinguish their warm fire, but neither one cared, for they had each other. 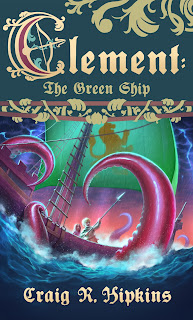 King Henry ll sends the 14-year-old Clement, Count of la Haye on a secret mission. The young count and his friends travel in the wake of the mysterious mariner known as Sir Humphrey Rochford.

Their destination? The legendary land of Vinland, known only from the Norse sagas. The journey is full of adventure and intrigue. Clement battles with a tyrannical Irish king and then finds his vessel attacked by a massive monster from the deep.

The Green Ship sails to the sparse and barren land of Greenland where more trouble awaits.

This novel is available to read on #KindleUnlimited

Craig R. Hipkins grew up in Hubbardston, Massachusetts. He is the author of medieval and gothic fiction. His novel, Adalbert is the sequel to Astrolabe written by his late twin brother Jay S. Hipkins (1968-2018)

He is an avid long-distance runner and enjoys astronomy in his spare time. 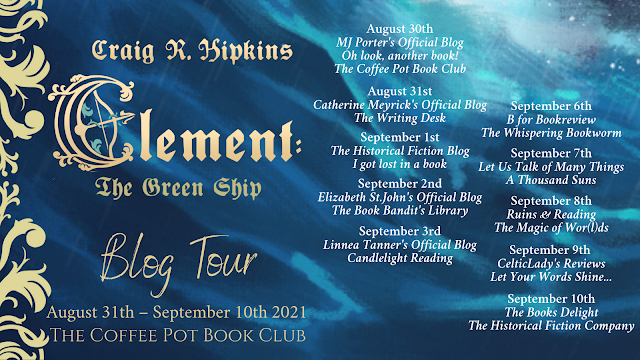