Promo: The Anarchy by Tracey Warr

I'm delighted to share an excerpt for The Anarchy, Book. 3 in the Conquest series, by author of historical fiction and non-fiction, Tracey Warr, as part of a blog tour with The Coffee Pot Book Club.

Make sure you read the enticing excerpt set during a fascinating period in time! 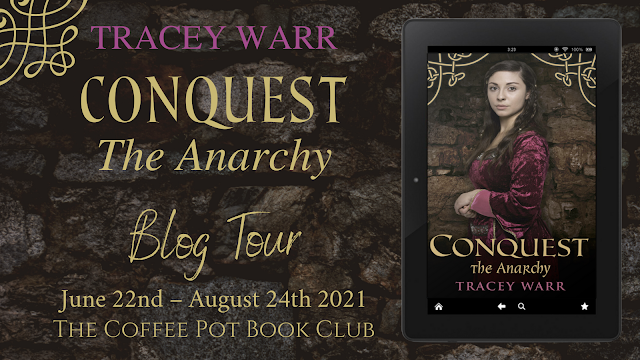 Cadell ran with his brother, Anarawd, up the last stretch of steep hill on the Caeo to Pumsaint road. At the brow of a hill, they caught their breath, gripping their thin, knobbled knees, then straightened up to survey the ruins of the Roman goldmine before them. Their stepmother, Gwenllian, had told them tales of how the mine had occupied this dip in the Cothi valley. The whole area was strewn with lumps of fist-size quartz. The bards sang of the Romans as a race of giants who had left behind them so many extraordinary feats of construction: roads, town walls, the long wall keeping out the Scots, forts, houses with mosaic floors, heated baths.

Anarawd was sceptical that these Romans could really have been giants, yet the mine was undeniable. If Cadell’s father could mine gold, he could rebuild his army. Cadell’s aunt had told him that she was serious about finding out about the mine. She had even written for advice to a German who was an expert working in the silver mines in the north of England. Cadell and Anarawd had recently returned home from a visit to their aunt in Cardigan and would very likely have a chance to return there again before too long. His aunt was intent on ensuring that they were well-versed in how to behave like the princes of Deheubarth, which, she told them emphatically, they were. It would be excellent, Cadell considered, if next time he visited his aunt he could go bearing a rich lode of information on the gold to further his father’s fight to regain the kingdom of Deheubarth. That would impress her, for sure.

Cadell’s heart beat fast with trepidation as well as exertion. He and Anarawd had agreed that they would venture into one of the dark, cavernous openings today, wade down the flooded, underground tunnels and find gold. Autumn had stripped away much of the vegetation from the site and heavy rains had filled the river and gullies, making it easier to see the layout of the mine and to distinguish between natural formations in the landscape and features that had been built by the Roman giants. ‘Or their Welsh slaves!’ Cadell exclaimed.

‘See, the leat they built, marked by that reed-filled depression?’ Anarawd asked. He gripped Cadell’s shoulders and twisted him to look to the right at a straight gully carved in the hillside. ‘‘That’s the aqueduct. And those are washing tables.’

‘Washing tables? What, like the Roman baths Gwenllian told us about in the city of Aquae Sulis?’

Anarawd laughed. ‘No! For washing and crushing the ore—to separate out the gold.’

Before Cadell, and to his left, were three overgrown ponds, which Anarawd guessed could be a series of ‘tanks’ that the Romans had made. Down there, amongst the tanks, were the entrances to the shafts. Their stepmother, Gwenllian, often told them stories from the distant past when the Romans had marched and built here, in the Welsh hills. It was hard to believe now, looking around at this neglected terrain. Parts of the structures were broken and eroded, and others had fused back with the rock and vegetation and were in the process of being reclaimed by the land. Gwenllian had told Cadell not to go near the mine-workings, which might collapse and were filled with poisonous air and ghosts, she said, but he and Anarawd had decided to shrug off her warnings. Their father had found a buried hoard of Roman golden jewellery that had gone to fund more men and weapons. Who knows what they might find. They might be able to contribute something really valuable to their father’s struggle.

The boys ambled down the hill towards a water-filled depression where Cadell picked up a long stick and poked it into the murky pool, stirring up pebbles and shimmers. ‘Gold!’ he shouted.

‘Just gold dust, faery dust,’ Anarawd laughed. ‘Not much use. How can you render something from dust specks?’

‘It’s still gold though,’ Cadell said stubbornly. ‘And if there’s still gold here, why isn’t the lord of this land mining it? Or Father?’

‘We’ve forgotten how to do it. Us and the Normans, both. We don’t know the Romans’ secrets of mining anymore.’

‘Well, can’t we read the ruins, the landscape we’re looking at right now?’ asked Cadell. ‘Figure it out, somehow?’

One day, Cadell’s father would regain his kingdom, which meant that one day Anarawd would be king of Deheubarth. An operating goldmine would be a very useful thing for a king, and his brother ought to realise that, Cadell considered.

At the sound of a bird’s screech, Cadell looked up to the distant ridge in time to see not only the circling bird of prey, but also a group of riders breaking from the dense tree cover on the slope. They were heading for the drovers’ road, the road he and Anarawd had come along from Caeo.

‘Quick,’ Anarawd gripped Cadell’s jerkin so that the stick in Cadell’s hand dropped into the water. ‘We have to warn Father. We’ll take the shortcut through the woods.’

Cadell briefly mourned his goldstick swirling out of reach and followed the line of Anarawd’s pointing finger to the riders. Swiftly, they turned and, shoulder to shoulder, ran as fast as their coltish, teenage legs would carry them, crashing past trees and through undergrowth, sure of the path. Visitors were an unusual occurrence here. Cadell’s thoughts buzzed chaotically between excitement and fear. They ran along the ridge above the village of Caeo where they could see below them their father and the red head of their stepmother, seated near a smoking fire. They traversed the steep hill at a run, on the diagonal, braking their gallop down the hill with their knees and hips, balancing with outstretched arms.

‘Father! Father! Riders are approaching!’ gasped Anarawd, his face hectic with the run and the unwarranted event.

Gruffudd and Gwenllian looked up at the sweating boys, as they gestured behind them. ‘How many?’ asked Gruffudd.

Ten was a warband and they could do plenty of damage against an unprepared village if they were so inclined. 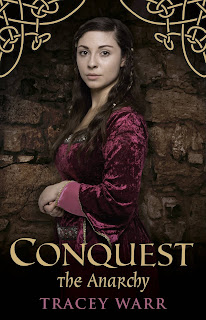 Unhappily married to Stephen de Marais, the Welsh princess, Nest, becomes increasingly embroiled in her countrymen’s resistance to the Norman occupation of her family lands. She plans to visit King Henry in the hope of securing a life away from her unwanted husband, but grieving for the loss of his son, the King is obsessed with relics and prophecies.
Meanwhile, Haith tries to avoid the reality that Nest is married to another man by distracting himself with the mystery of the shipwreck in which the King’s heir drowned. As Haith pieces together fragments of the tragedy, he discovers a chest full of secrets, but will the revelations bring a culprit to light and aid the grieving King?
Will the two lovers be united as Nest fights for independence and Haith struggles to protect King Henry?
Buy Links:
Universal Links:
The Daughter of the Last King (Book 1) - https://geni.us/LPF1
The Drowned Court (Book 2) - https://geni.us/ddAFsas
The Anarchy (Book 3) - https://geni.us/274ZX 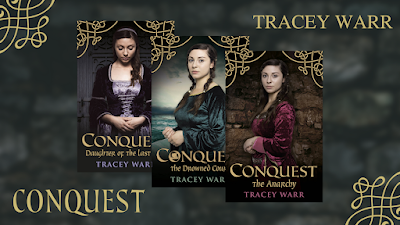 ~~~
About the Author:
Tracey Warr
Tracey Warr (1958- ) was born in London and lives in the UK and France. Her first historical novel, Almodis the Peaceweaver (Impress, 2011) is set in 11th century France and Spain and is a fictionalised account of the true story of the Occitan female lord, Almodis de la Marche, who was Countess of Toulouse and Barcelona. It was shortlisted for the Impress Prize for New Fiction and the Rome Film Festival Books Initiative and won a Santander Research Award. Her second novel, The Viking Hostage, set in 10th century France and Wales, was published by Impress Books in 2014 and topped the Amazon Australia charts. Her Conquest trilogy, Daughter of the Last King, The Drowned Court, and The Anarchy recount the story of a Welsh noblewoman caught up in the struggle between the Welsh and the Normans in the 12th century. She was awarded a Literature Wales Writers Bursary. Her writing is a weave of researched history and imagined stories in the gaps in history.
Tracey Warr studied English at University of Hull and Oxford University, gaining a BA (Hons) and MPhil. She worked at the Arts Council, Institute of Contemporary Arts, Chatto & Windus Publishers, and edited Poetry Review magazine with Mick Imlah. She also publishes art writing on contemporary artists, and in 2016 she published a future fiction novella, Meanda, in English and French, as part of the art project, Exoplanet Lot. She recently published a series of three books, The Water Age, which are future fiction and art and writing workshop books - one for adults and one for children - on the topic of water in the future. She gained a PhD in Art History in 2007 and was Guest Professor at Bauhaus University and Senior Lecturer at Oxford Brookes University and Dartington College of Arts. Her published books on contemporary art include The Artist’s Body (Phaidon, 2000), Remote Performances in Nature and Architecture (Routledge, 2015) and The Midden (Garret, 2018). She gained an MA in Creative Writing at University of Wales Trinity St David in 2011. She is Head of Research at Dartington Trust and teaches on MA Poetics of Imagination for Dartington Arts School.
Social Media Links:
Website: https://traceywarrwriting.com/
Twitter: https://twitter.com/TraceyWarr1
Facebook: https://www.facebook.com/traceywarrhistoricalwriting/
LinkedIn: https://uk.linkedin.com/in/traceywarr
Instagram: https://www.instagram.com/tracey.warr.9/
Amazon Author Page: https://www.amazon.co.uk/Tracey-Warr/e/B0053YDVPE
Goodreads: https://www.goodreads.com/series/192570-conquest 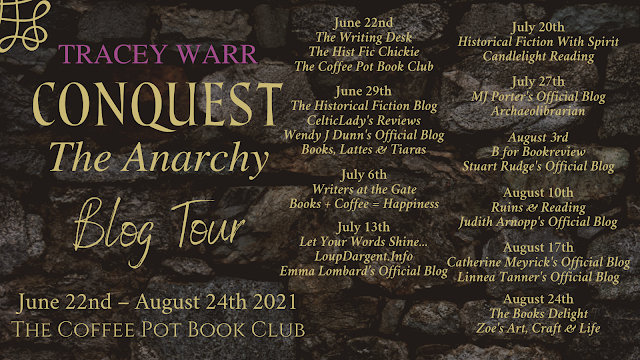