Review: A Match for the Rebellious Earl by Lara Temple

Today, I'm delighted to share my review for A Match for the Rebellious Earl by historical romance writer, Lara Temple.

A bit ’Thank You’ to the author for an ARC. I've now pre-ordered my own Kindle copy. 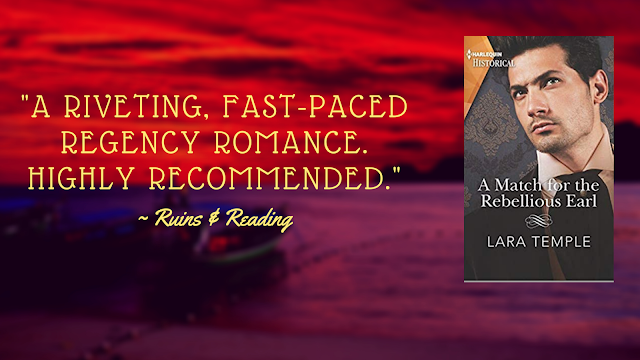 A Match for the Rebellious Earl

I came across the character of Kit Carrington in a previous novel I reviewed, The Return of the Disappearing Duke, and I was thrilled to hear he featured in a novel of his own. And he did not disappoint (not that I expected him to)...

In A Match for the Rebellious Earl, we come across Captain Kit Carrington, now Lord Westford, an earl, on the death of his grandfather. A man who loves the freedom of the sea – and prefers to steer clear from his domineering, widowed grandmother – he is in no hurry to return home and take up the reins of his estate. When he's urged by his cousin Julian, a carefree rogue he never got on with since his childhood, to attend a family wedding, he resigns himself to spend as little time onshore as needed.

But when he meets Miss Genevieve Maitland again after eight years, he meets his match indeed, for Genny is feisty, determined, and bossy. When she enlists his help to find a suitable match for his widowed step-mother and Genny's sister Serena, little does he know where the path will lead him.

"’Right now I'm contemplating your chest,’ she blurted out."

A Match for the Rebellious Earl is a wonderful romance that holds you in a strong grip (pun intended) throughout. The two main characters, Kit and Genny, are complex beings; each with a strong sense of personal space and independence. Kit is highly respected by his men, with his strong sense of honour and loyalty. Genny has a caring nature that not only restricted to her sister, but also to an assortment of animals. She runs the Carrington home under the watchful eye – and sharp tongue – of Kit's grandmother, but in doing so, she ignores herself, and her own dreams and desires. Until Kit shows up...

I thoroughly enjoyed this novel. As the setting moves from London to Dorset, the restrictions set by the Ton fall away, and finally both Kit and Genny discover emotions they'd kept hidden before. The development of the characters is one of the strong points of this story. Their well-hidden fears and insecurities come to the fore in the final chapters where a teasing ’will they-won't they’ situation rises from the choppy waters of the sea.

As Genny discovers her daring self she'd kept locked away for years, Kit realises that life onshore has its enticing rewards.

I'm hooked on Lara Temple's new Return of the Rogues series, and I'm already looking forward to the next. Having kept a close eye on various characters in A Match for the Rebellious Earl, I'm now wondering who is next on her list of lonely hearts to find love. 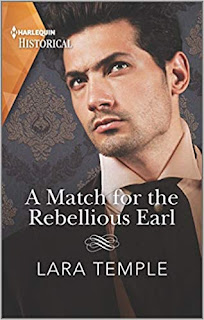 Now he’s back in Society’s ballrooms!

Whispers of Captain Kit Carrington―now Lord Westford―have long scandalised the Ton… So his arrival at the season’s most-anticipated ball sends Society’s gossips into a frenzy!

Miss Genevieve Maitland needs his help to find an eligible match for her sister, but assumes he’ll be reluctant to help the family that rejected him. Yet after one spine-tingling waltz with Kit, sensible Genny finds he’s not her opponent―but a very tempting ally…!

Disclaimer: The author provided me with an ARC in exchange for an honest review, but I've now also bought a copy. All opinions voiced are entirely my own.