I'm so thrilled to share my review of A Feigned Madness by Tonya Mitchell. A moving, gripping and often shocking account of life inside a women's mental asylum in 1880s New York.

My thanks to The Coffee Pot Book Club for the opportunity. 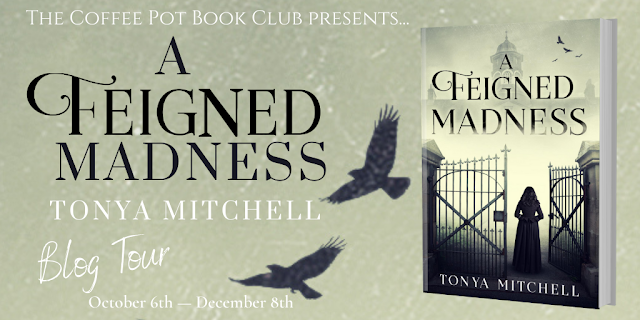 A Feigned Madness is a fictionalised account based on the true story of Nellie Bly (the pseudonym used by Elizabeth Cochrane), a woman journalist in the 1880s who goes undercover in a mental asylum for the chance to gain an employment contract with the biggest newspaper in New York, the World – but she uncovers more than she is comfortable with and, in the end, faces a tough decision.

At the beginning of A Feigned Madness, we meet Elizabeth as a young woman, her head full of dreams of being a professional journalist. But she is on her last few cents, and, having to maintain lodgings for herself and her mother, she is desperate. She is offered a chance of employment, but only if she successfully goes undercover on Blackwell's Island, a mental institution for women, and if her subsequent story proves popular.

In flashbacks, we read about Elizabeth's rise as a local reporter in Pittsburgh. These chapters don't distract from the main plot at all, but rather show us how she got to where she is. Not for Nellie Bly to report on flower shows or fashion, womanly topics that bore her to death! No, she moved to New York to pursue her journalism career in a different way.

She arrives at Blackwell's Island – via a one-night's stay at a boardinghouse for women during which she began her successful ruse by feigning insanity to the extent that the resident women become scared of her – after doctors have attested to it. It was surprisingly easy – scarily so.

Once inside, Elizabeth realises quickly that patients are not treated well. On the contrary, the daily abuse by nurses, covered up by the Superintendent in charge, is widespread. The food consists of stale bread, murky cold tea and other items one could barely call nutritious. Portions were tiny. That soon explained why so many women looked thin, emaciated even.

Speaking to the women, Elizabeth soon discovers how easy it is to become locked up. Not everyone at Blackwell's was insane. On the contrary, many women were brought in because husbands or other relatives wanted rid of them. And no one believed them.

Tonya Mitchell describes the harrowing conditions in great detail, to the point that, as a reader, you could smell the stench, you could feel the women's humiliation at being 'bathed’ (or dunked, rather) in cold water in front of everyone else. At sleeping naked in their dormitories, in late September, without heating and only a thin blanket for cover that did not even cover your whole body.

The mental abuse is the most harrowing, and the author tells this in tragic detail. Whilst the violence and abuse shown in the novel is not gratuitous at all, the novel reveals clearly the cruel side of the staff, in particular the nurses. I found myself worrying about these poor women, and had to wipe away a stray tear at times. Reading this fictionalised account makes you realise how vulnerable we can be when locked up, with no one to help you. And whilst conditions have no doubt improved, it does make you wonder what goes on behind closed gates.

A Feigned Madness is a tough account of Elizabeth's stay at Blackwell's Island. It shows her own development over the duration of her stay, having been treated like all other patients, including the physical abuse, forced administration of drugs, and humiliation. With the little food they got, and noise and disruptions throughout the night, it was no surprise that patients felt weak and became passive. But through all this, Elizabeth's fighting spirit emerged, and she often defended weaker women to her own detriment.

After the agreed ten days, the New York World got her out. And it was the publication of her account that highlighted the atrocious conditions the women in the overcrowded institution endured, the blind eye turned by management, and the lack of funding and oversight by local authorities.

Tonya Mitchell portrays Elizabeth as curious, daring and outspoken. Her views contradicted the norm at the time, and her character comes across as brave, spirited, and with a social conscience that was rare in those days. We accompany her throughout her stay, we feel the humiliation, the sadness, the frustration that she couldn't risk revealing herself to help fellow patients, and we sensed the dangers she faced whenever she did speak up.

A Feigned Madness is a story that stays in your mind. You can't help but compare her discovery to our present world, and the many injustices that still go on around us. Elizabeth is a forceful, determined character, but she is portrayed with a modern and social outlook that many of us can identify with.

A highly recommended read that I will revisit again.

A Feigned Madness by Tonya Mitchell

The insane asylum on Blackwell’s Island is a human rat trap. It is easy to get in, but once there it is impossible to get out. —Nellie Bly

Elizabeth Cochrane has a secret. 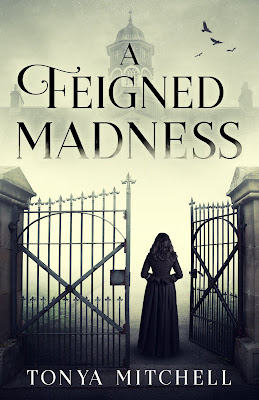 She isn’t the madwoman with amnesia the doctors and inmates at Blackwell’s Asylum think she is.

In truth, she’s working undercover for the New York World. When the managing editor refuses to hire her because she’s a woman, Elizabeth strikes a deal: in exchange for a job, she’ll impersonate a lunatic to expose a local asylum’s abuses.

When she arrives at the asylum, Elizabeth realizes she must make a decision—is she there merely to bear witness, or to intervene on behalf of the abused inmates? Can she interfere without blowing her cover? As the superintendent of the asylum grows increasingly suspicious, Elizabeth knows her scheme—and her dream of becoming a journalist in New York—is in jeopardy.

A Feigned Madness is a meticulously researched, fictionalized account of the woman who would come to be known as daredevil reporter Nellie Bly. At a time of cutthroat journalism, when newspapers battled for readers at any cost, Bly emerged as one of the first to break through the gender barrier—a woman who would, through her daring exploits, forge a trail for women fighting for their place in the world. 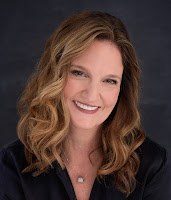 Ever since reading Jane Eyre in high school, Tonya Mitchell has been drawn to dark stories of the gothic variety. Her influences include Mary Shelley, Edgar Allan Poe, and Bram Stoker. More contemporarily, she loves the work of Agatha Christie, Margaret Atwood, and Laura Purcell.

When she landed on a story about a woman who feigned insanity in order to go undercover in an insane asylum, she knew she’d landed on something she was meant to write. Her short fiction has appeared in, among other publications, Glimmer and Other Stories and Poems, for which she won the Cinnamon Press award in fiction.

She is a self-professed Anglophile and is obsessed with all things relating to the Victorian period. She is a member of the Historical Novel Society North America and resides in Cincinnati, Ohio with her husband and three wildly energetic sons. A Feigned Madness is her first novel.