The King's Inquisitor is currently on blog tour with The Coffee Pot Book Club, so make sure to check all the other stops too! 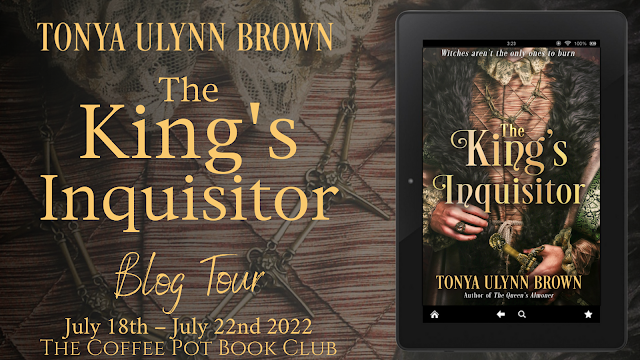 Sheepshearer held up his hand to silence the belligerent man. The king adjusted his seat but did not speak. Instead, Sheepshearer asked, “Where is this mark ye have found?”

The offended man jerked the woman by the arm and pulled her hair up to expose her neck. “There,” he pointed with a stubby finger. James and I both leaned closer to get a better look at the mark. Sheepshearer stepped closer, taking out a small lens and holding it in front of his eye. He didn’t speak for a moment, then pulled a small leather pouch from inside his coat and walked to the table where we sat.

I stared in fascination. I had never seen a witch pricker do his work. I admit, that was one of the reasons I had agreed to accompany James this evening. I was intrigued at the method of determining who was a witch and who wasn’t.

The witch pricker removed his coat then untied a thin strap and unrolled the pouch. Inside were all manner of instruments. Needles of various lengths, pointed rods, some straight and some curved, several surgeon’s lancets with differing widths, a crude sort of pinching device, and a small rod with a severe hook on the end. I shivered as he selected his instrument of choice then turned and faced the woman.

“It looks like a lover’s mark to me,” I whispered to James. I eyed him to see if he understood my meaning. He was a recently married man after all, but the queen was the only woman he had been with in his twenty-four years. She had performed her duty, but whether it had been with enjoyment was not something he had shared with even me.

“Perhaps,” he finally said. Yet, he did not move to stop Sheepshearer. I, on the other hand, shifted in my seat. I might have put a lover’s mark or two on a woman. I shuddered at the thought that any woman I had been with would be subjected to such treatment. Still, any woman worth her weight in ale would never allow a bruise to be discovered. Apparently, Geillis Duncan had no choice.

He had chosen a straight blade. The likes of which a man would use to shave the hair from his face. Surely, he did not intend to filet her alive?

At the sight of the chosen instrument, Geillis too reacted. She tried to jerk her arm away from Seton but he held fast. Curling her toes in an attempt to dig her bare feet into the wooden floor, she pushed against Seton, bowing her back, and poking a boney elbow into his side. He almost lost hold of her until Sheepshearer motioned for Marley, who up until now had remained uninvolved in the shadows, to come forth and help restrain her.

Once subdued, the woman stiffened her body, straight as a branding rod. There was no pleading, no entreating for mercy, nor cry of innocence. She simply stood, looking straight ahead. The darkness that had overshadowed her face earlier seemed to have settled into a permanent mien. 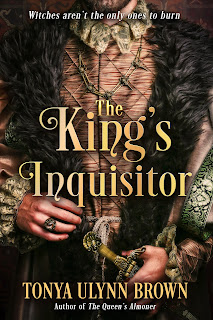 The queen of Scotland is dead. Her almoner’s son, William Broune, has fulfilled his father’s wish that he should serve the king, James VI, at court. William finds himself caught between loyalty to the king or loyalty to his conscience. As William is forced to serve as the king’s inquisitor in the North Berwick witch trials, he must make a decision.

Will he do what the king asks, and earn the wife, title, and prestige he has always desired, or will he let a bold Scottish lass influence him to follow his heart and do the right thing?

If William doesn’t make the right choice, he may be among the accused.

This book is available to read on #KindleUnlimited

Tonya Ulynn Brown is an elementary school teacher. She holds a Master’s degree in Teaching and uses her love of history and reading to encourage the same love in her students.

Tonya finds inspiration in the historical figures she has studied and in the places she has traveled. Her interest in medieval and early modern British history influences her writing. She resides in rural southeastern Ohio, USA with her husband, Stephen, two boys, Garren and Gabriel, and a very naughty Springer Spaniel. 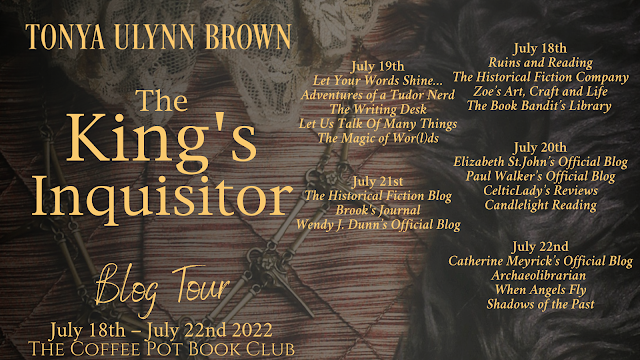