Spotlight: Discovery by Sherry A. Burton

I'm delighted to spotlight Discovery: The Orphan Train Saga Book 1 by Sherry A. Burton as part of a blog tour with The Coffee Pot Book Club.

Have a read of the gripping excerpt below and make sure to watch the trailer! 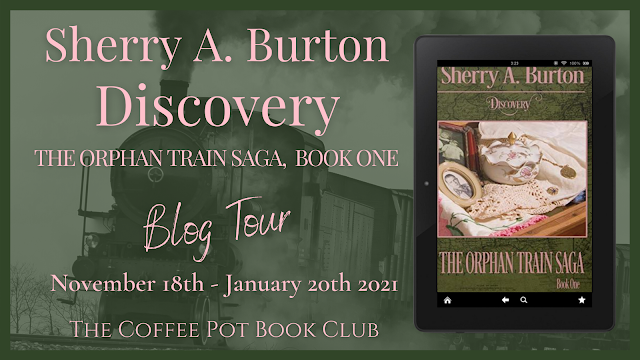 By Sherry A. Burton 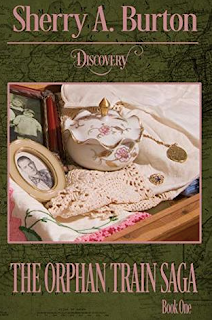 While most use their summer breaks for pleasure, third grade teacher Cindy Moore is using her summer vacation to tie up some loose ends concerning her grandmother’s estate. When Cindy enters the storage unit that holds her grandmother’s belongings, she is merely looking for items she can sell to recoup some of the rental fees she’s spent paying for the unit.

Instead, what she finds are secrets her grandmother has taken to the grave with her. The more Cindy uncovers, the more she wants to know. Why was her grandmother abandoned by her own mother? Why hadn’t she told Cindy she’d lived in an orphanage? And how come her grandmother never mentioned she’d made history as one of the children who rode the Orphan Trains?

Upon entering the store, Mileta learned “mercantile” was just a fancy term for a country store. The store was small, the shelves fully stocked with sacks of flour, beans, coffee, and other items one would expect. There were baskets of fresh bread, boiled eggs, and a barrel-shaped jar of large dill pickles that made Mileta’s mouth water. She had not seen a pickle in years. She saw a wooden bin overflowing with large red apples and sighed. The counter to her right held several rows of jars, each stocked full of colorful candy. Mileta longed to taste something sweet, but she had no money and dared not ask for such trivial indulgences. Instead, she waited without speaking while Mrs. Shively purchased three boiled eggs, a small loaf of bread, and two hunks of cheese. As the merchant wrapped the eggs, Mileta wandered to a table with rows of colorful fabric.

“Mind your manners, girl,” Mrs. Shively said as Mileta reached to touch one.

“They are on sale,” the merchant said, eyeing Mileta’s appearance.

“The girl will be getting a proper uniform when we get back to Chicago,” Mrs. Shively said and placed a dime on the counter.

The merchant picked up the coin and put it in the till. “Oh?”

“Heavens, yes, I could not have her running around the house in those rags she is wearing, could I? Lord have mercy, what would the neighbors think.”

“Indeed. I take it the girl’s not your daughter, then?”

Mrs. Shively pulled herself taller, which was difficult to do at her height. “Hmp, I dare say not. She is one of those orphans out of New York City. You should have seen them running the streets begging for food and stealing money. You go there, you better watch your pockets or they will be picked clean.”

Several women were milling around the fabric table and listening to the conversation at hand. Looking down their noses, they clutched their purses and moved away from Mileta.

Mrs. Shively nodded. “I do, and those urchins are free for the taking. I tell you, I am simply doing my basic duty and helping the poor child out.”

The merchant nodded his head. “Well, she best be thanking her lucky stars a woman of your obvious stature has taken pity on her.”

The door opened, and Mr. Shively stuck his head in and looked around. He had his pocket watch in his hand and held it out for them to see. “Ready, Sonia? They will be sounding the whistle momentarily.”

Mrs. Shively picked up her purchase and bade the shop owner farewell. “Coming out now, Stewart.”

Mileta dragged her feet as she followed. The colorful sights and inviting smells inside the store did little to ease her dire mood. It didn’t help that the adults spoke about her as if she were not even there. And to be so hateful. Sure, there were kids that would do the things she said and more. However, she was not one of them. As they exited the store, she could see the other children sitting on the grass, smiling and enjoying their lunch. A few boys wrestled amongst freshly fallen leaves.

Mrs. Shively shook her head. “Heathens; just look at the way they are wallowing around on the ground like hogs.”

Mr. Shively gave Mileta a nudge. “Come along now, girl, no dawdling. You are not a part of that group anymore.”

She saw her friends huddled together. The boy that sat behind her was with them. The group all turned to stare, but none called out to her. What he said was true; her friends had already replaced her. Her mood darkened as she followed her new guardians to the train.

“Here, girl,” the woman said once they were seated. She handed Mileta a hardboiled egg, then pulled a cloth from her pocket and handed it to Mileta. “Place the napkin on your lap and use it for the eggshells.”

Mrs. Shively handed her husband an egg, half of the bread, and one of the two hunks of cheese. She placed the rest of the bread, the second hunk of cheese, and the last egg in her own lap.

Mileta had not eaten a fresh egg since she’d left Poland. She knew she should be thrilled to have something so extravagant. Instead, her sour mood deepened as she took her time peeling the shell.

The train whistle blared its impending departure. Within seconds, the car was alive with excited voices as everyone made their way back to their seats.

“Do be careful there,” Mr. Shively reprimanded over his shoulder when someone bumped into the back of his chair. Mileta smiled, fairly certain she knew who that someone was. Her smile waned as she remembered it was he who had taken her spot among her friends.

“Heathens, all of them,” Mrs. Shively uttered once more.

The whistle sounded its second warning.

“All aboard,” a man’s voice called from somewhere outside the train.

Mileta looked towards the window and gasped, surprised to see a man at their level cleaning the pane.

Mr. Shively looked at the window. “It is done anytime the train stops for any length of time. The glass gets filthy with the smoke and oil off the engine.”

“Stewart, leave the girl alone so she can eat her egg. I want the cabin agent to collect the eggshells before the girl makes a mess. It wouldn’t do to have those shells underfoot now, would it?”

I am not a baby, and my name is not “girl.” She was about to open her mouth to say just that when she had a better idea. She peeled the last of her egg, plopped the entire thing into her mouth, and proceeded to chew.

“Mmm, this is so good. I have not had eggs in so long.” As she spoke, large bits of egg dropped onto the front of her coat and settled into her lap. Pretending to clean up the mess, she lifted the napkin, sending shells and egg parts flying.

Mr. Shively pushed back in his seat in an attempt to avoid being pelted with egg remnants. While he managed to avoid the mess, his wife was not as fortunate. Pieces of chewed egg landed on her coat and mingled with the fur. Mrs. Shively jumped from her seat, her crimson face a strong contrast to the silver fur on the coat.

“Why you wicked little street urchin! Look what you’ve done to my new coat. I traveled all the way to New York just to purchase it from Russeks on 5th Avenue. Do you have any idea how much this cost me?”

Mr. Shively stood and made a vain attempt of removing the egg from the fur.

Mileta was suddenly regretting her actions. She’d never purchased a coat before. In truth, she’d never purchased anything. Of course, she had no clue how much the coat cost, but Mrs. Shively seemed so angry, and she had asked Mileta a question. Obviously, she expected an answer. She remembered what Esther had said about selling flowers. She’d earned six pennies a day, eight on Sunday. Since it wasn’t Sunday, the coat probably didn’t cost as much, but then again, it was a coat and not a flower, and Mrs. Shively did seem pretty upset, so Mileta decided to go with a higher number. “Nine pennies?”

Apparently, that was not the correct answer, as Mrs. Shively began to tremble and Mr. Shively stared at her, mouth agape.

Watch the trailer for Discovery: https://www.youtube.com/watch?v=i37zGjqntdU 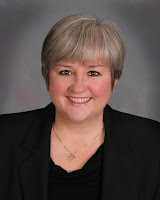 Born in Kentucky, Sherry got her start in writing by pledging to write a happy ending to a good friend who was going through some really tough times. The story surprised her by taking over and practically writing itself. What started off as a way to make her friend smile started her on a journey that would forever change her life. Sherry readily admits to hearing voices and is convinced that being married to her best friend for thirty-eight plus years goes a long way in helping her write happily-ever-afters.

Sherry is the author of The Orphan Train Saga novels, a planned eighteen book historical fiction saga that revolves around the historic orphan trains. Books in the saga include Discovery, Shameless, Treachery and Guardian. Loyal, the fifth in the saga, expected to release summer of 2021.

Sherry resides in Michigan and spends most of her time writing from her home office, traveling to book signing events and giving lectures on the Orphan Trains. 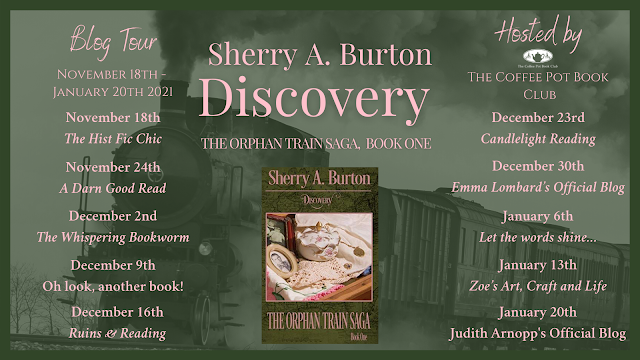