Visiting the ancient fortress of Carcassonne

Today, I want to share my home with you... la Cité de Carcassonne!

I must admit I've lost count of the number of visits I've made to date to the impressive battlements of Carcassonne, but I love returning to the place that has been occupied since ancient times.

Hubby and I have been living in Carcassonne since early 2018. A town of two sides – the ancient citadel (la Cité) with its castle, and the lower town (la ville basse) – it is just small enough to be able to wander around and discover hidden gems. 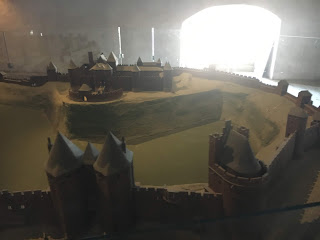 The hill the citadel sits on was already occupied during the Neolithic period, its elevated position allowing for sweeping views over the plain below. With sweeping views towards the Pyrenees to the south (beyond the rolling Corbières hills) and the Montagne Noire (southern end of the Massif Central) to the north, it was a great defensive site.

The Romans agreed, and built a stone wall around their settlement to fortify it. They recognised the value of this outpost on the trading route between Narbonne and Toulouse. Traces of those Roman stones are still visible in several places. Inside the château, you can see other evidence of Roman occupation, such as burial slabs, distance markers and original tiles.

In the dying years of the Roman Empire, the Goths arrived and began to settle. Septimania – as the region west of the Mediterranean Sea was then known as – was officially ceded to them in 462. 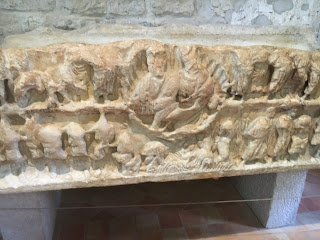 In the early 8th century, the Franks began to expand from the north, and the Saracens from the coast and south of the Pyrenees. Eventually, in the late 750s and early 760s, the Franks tried again under Pepin the Short (le Bref) who was more successful in pushing the Saracens to the fringes of Septimania. It was in the late 8th century that Bellon, the first count of Carcassonne, existed. Very little is know about him, but he was likely of Visigoth stock. I took the liberty of creating a life for him in my dual-timeline novel, Love Lost in Time.


Carcassonne is of course best-known for its links to the Cathars – a group of dualists who the Catholic Church persecuted over decades, mainly in the early- to mid-13th century. In 1209, the fortress fell to the ’crusaders’ – sent by Pope Innocent III to either convert or kill the ’heathens’ – for the first time. The then viscount, Raymond-Roger de Trencavel – whose family had built and held the château for over a century – was thrown into his own gaol and died there under unexplained circumstances. The stuff of novels! (The history of the Cathars is well worth a separate post one day.)

By 1247, the city submitted to the King of France, Louis IX (Saint Louis, for obvious reasons!) who destroyed the settlement at the base of the fortress and rebuilt a new town across the river Aude. The Bastide St. Louis is still named after him. I wonder if it will ever change its name...

During the Hundred Years’ War, Edward the Black Prince (another fascinating character!) besieged Carcassonne but failed in his attempt. Large swathes of the area and many castles were destroyed by the English army.

Throughout the centuries, Carcassonne retained its important as an outpost against invasion from the south, but the Treaty of the Pyrenees conveyed the Roussillon area to France, and the town's usefulness declined. It began to fall into disrepair. By the mid-1800s, the government wanted to demolish the site, to great complaint.

It is thanks to the architect Eugène Viollet-le-Duc that the citadel received a new lease of life. His refurbishments didn't go smoothly, with many seeing his fairy-tale turrets and conical roofs as somewhat stylised, but old maps might prove his decision right in some aspects.

Nowadays a Unesco World Heritage site and tourist magnet, Carcassonne is still an incredible place to visit. I'm fortunate enough to be able to walk up to la Cité for a stroll, lunch in the sunshine or just relaxing with a leisurely glass of wine or two, people-watching.

Love Lost in Time is now available on Amazon in ebook and paperback formats.