A few weeks ago, hubby and I decided on a bit of a road trip – to Montségur, the famous fortress which the Cathars, followers of an earlier version of Christianity, made their home.

The village of Montségur is located in the Ariège, a département that reaches into the Pyrenees, bordering Spain and Andorra. The Ariège is known for it's beautiful, rugged landscapes – a hikers’ paradise!

When we arrived after our drive of 1 1/2 hours, the air held a chill, despite the warm sunshine. At an elevation of around 700m above sea level, no surprise. It was just before lunchtime, and we decided to visit the only open restaurant, which was rustic and reminded us a little of country pubs in Scotland. Apart from two ladies having drinks on the terrace (a bit too chilly for us), we were the only guests. The food was good and service friendly enough.

Then we took a wander around the sleepy village. Many houses were shuttered up, meaning they were either holiday homes or gîtes (self-catered flats). It felt a little abandoned, and I can imagine the winters are quite harsh up there. Unfortunately, the museum was closed on a Monday.

Then we drove back to the car park at the foot of the château de Montségur, which still meant we had to climb the 200m to the peak. A steep climb where you require good hiking shoes and a sense of balance. And a dog that pulls you up... ;-)

The hill has been inhabited since Neolithic times, and also the Romans were there. The name Montségur has Latin origins: mons securus. In the early 13th century, a vassal of the count of Foix built a fortress on the top of the hill, and a range of dwellings built into the rocks, which were inhabited by his people. Sadly, only few remnants of these early buildings remain.

Of course, the site is best known as being the seat of the Cathars, a ’sect’ whose leanings go back in time to the early Christian teachings, from around 1232. Earlier, the Church had sought – and found – the help of the French kings keen to expand their reaches across the independent south, and in May 1243, the siege of Montségur began. An army of several thousand tried for months to attack and starve out the residents, and in March 1244, they succeeded, most likely by attacking the most difficult, but weakest, spot. Their offer to leave those who converted ’genuinely’ back to Catholicism was declined by many believers, and over 200 ’heretics’ were burnt at the Prats dels Crémats, the ’field of the burnt’. A memorial now stands in this place.
As Montségur served as a fortress defending the southern border, there are now only few traces remaining of the Cathar days. It is an impressive site, huge, and it's hard to believe that people lived on those steep slopes. We found the ascent tricky, and we’re healthy. But even we took our time on the gravel. (The photo doesn’t really do it justice!) One false step...

At the top, it was busy with many families visiting. Some had brought a picnic, sitting on the walls of some former settlements, looking out towards the north. A great idea for another visit.

We spent at least 1 1/2 hours up there, walking around the walls and into the ruins. It’s an awe-inspiring site! It did not feel like a place of massacre (such as I sensed when visiting Culloden battle field near Inverness, Scotland), but had a rather peaceful feel to it. Something I didn’t expect.

Now, we have our sight on the other Cathar castles. We have so far visited Lastours and Montségur, and, of course, we look out over Carcassonne every day. So which one will be next? 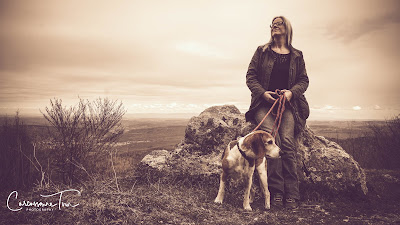 Cathie Dunn
Writer of historical fiction and romance. Publisher, editor, novel-writing tutor and reviewer. Drinker of wine and gin. Owned by a rescue dog and two cats. Resident in Scotland for many years, but now living in the south-west of France.